What happens on Coronation Street this Christmas? All the episode details and times 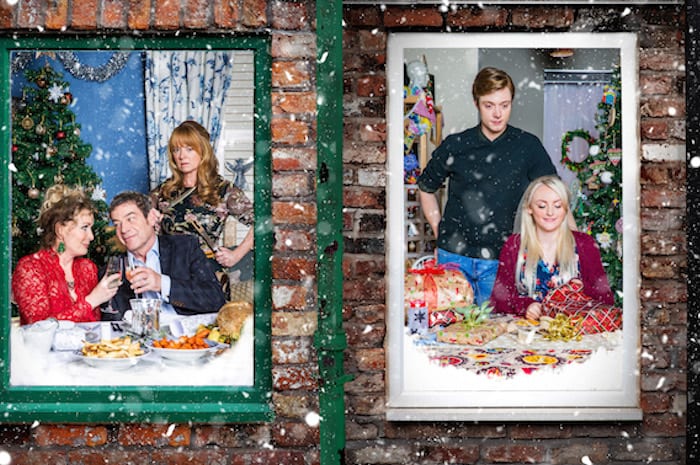 It’s going to be a drama-filled Christmas once again on the cobbles of Coronation Street.

The soap’s characters will be full of festive spirit – although some may take that a little too far. And you can be sure that Christmas in Weatherfield won’t have many a dull moment.

Make sure you don’t miss an episode of Corrie over Christmas and New Year with our handy guide to when the soap will be on over the next fortnight – and a little taster of what to expect.

It’s Christmas Eve and Tim fears he did something bad last night. Tim’s unsure what to do upon receiving a visiting order from Sally but Eileen pushes him to visit her. As Tim sets off, Faye tells him she saw him in bed with Gina. Tim tells a stunned Gina he’s disgusted he had sex with his wife’s sister. Meanwhile when Sally sticks up for Abi, Marcia roughly grabs her. Abi sends Marcia packing but as she goes, Marcia warns Sally that Abi won’t always be around to protect her.

Sally’s gutted when Tim fails to show up for visiting. Faye’s not bothered by the Tim and Gina situation but Sophie’s furious. Gina listens in as a devastated Tim tells Faye he intends to visit Sally on Christmas Day to confess the truth and doubts his marriage will survive.

Jenny gets drunk and Gemma is troubled

After Jenny’s fall down the stairs, Gemma insists she goes to A&E to get her injuries checked out, leaving Johnny behind the bar with Liz. After a trip to A&E, Jenny tells Rita she has a fractured rib. When Rita lets slip about Johnny’s affair with Liz and Jenny insists she wants to forget it, Gemma is left troubled and wondering if there is another side to Johnny.

When she gets back to the pub, Jenny helps herself to a bottle of red after discovering that Liz has cancelled her and Eileen’s holiday so will be around over Christmas, meanwhile Gemma quizzes Tyrone about his abusive relationship with Kirsty, her suspicions over Johnny piqued.

Johnny hosts the Christmas Eve pub quiz but when Jenny gets too drunk, Johnny snaps at her and she dashes out. Gemma follows her into the yard and asks if Johnny’s abusive. Jenny denies it but Gemma doesn’t believe a word.

Daniel and Sinead host a Vegan Christmas Day for Adam, Ken, Peter, Beth, Kirk and Craig. Ken produces a set of handbells and insists they make their own music. But Sinead is left upset when she overhears Daniel confiding in Peter that he’s worried she’s going to die.

Soap fans will be pleased to hear there will be some light relief on Christmas Day – particularly when dastardly Lewis realises with horror that he’s accidentally recorded his own conversation on a teddy Christmas present for Lily. Having retrieved the teddy from Lily, Lewis surreptitiously deletes an incriminating message.

And Gail arrives back from Milan just in time for Christmas. Meanwhile there’s a festive miracle when Ruby opens her back door and Cerberus their missing dog bounds in.

Gail gets all the gossip…

Gail’s furious to learn that she is the last to know of Nick’s secret wife and impending divorce meanwhile Audrey tells David that she intends to wind down over the next year and hand over her share of the business to him.

Lewis takes a phone call and heads out to the Rovers’ back yard, Gail follows him. As she listens to his conversation, her eyes widen.

This is looking like a classic Corrie episode to look forward to – as Gail goes full on Miss Marple to try and work out what charmer Lewis is really up to.

After Carla advises Gail to play Lewis at his own game, Gail slips her hand in his coat pocket, steals his diary and notes his next few appointments. Making out he’s got a hair appointment, Lewis slips out of the pub.

Gail follows Lewis to a posh hotel and watches in anger as he wines and dines a glamorous, middle aged lady. Having followed Lewis and his lady friend upstairs, a furious Gail manages to take a sneaky picture of them as they enter their hotel bedroom. But, hilariously, she later finds she took a selfie and not the incriminating photo she thought!

Peter takes ownership of the old snooker club on Victoria Street but Kirk warns him he read it’s haunted. Dev decides to play a trick on him and enlists the help of Kirk. Dev leads a nervous Kirk into the snooker hall and produces some chalk.

In the snooker hall, Peter and Simon find snooker cues in pentangles on the floor and ‘666’ scrawled on the wall in chalk.

Peter and Carla back together?

After Carla helps Peter to get his own back on the pranksters Dev and Kirk, the former couple get talking at the snooker hall. Carla warns Peter that the snooker hall is a money pit and challenges him to a game of snooker, suggesting if she wins he pulls out of the sale. Over a charged game, temperatures rise as they relive their past.

The chemistry still very much alive between them will the pair admit their feelings?

And will Kana reunite?

Kate is behind the Rovers bar when Imogen enters the pub and kisses her on the cheek. A gutted Rana watches Kate head off into town with Imogen and Imran and Toyah urge Rana to go after her.

Tipsy, Rana confesses to Kate that she still loves her. As Gemma leads the countdown to midnight, will Kana reunite?

Will Audrey be heartbroken again?

Gail is suspicious that today is the day that Lewis is planning to flit meanwhile Lewis calls in the salon and begs Audrey to meet him in the bistro for dinner promising that all will become clear. Audrey confides in Maria that she really loves Lewis and with Maria’s blessing, Audrey heads into town to buy a new dress for her dinner date.

Later, Gail finds Audrey in the bistro, anxiously waiting for Lewis. Admitting defeat, Audrey heads home with Gail fearing she was right all along.

Jude is found – but up to old tricks

Mary’s private detective tells her Jude was last seen at a B&B in Blackpool and cajoles Roy into the trip. Reunited with her son, Mary asks Jude to come home however Jude tells her he can’t as he owes the B&B owner £500.

While Mary heads off to find a cashpoint, Jude turns to his new girlfriend Kelly and painting himself as a surgeon, makes out Mary is one of his patients!

Mary returns to the B&B with £800 but when Kelly refers to Jude as Dr Ken Barlow, Roy realises that Jude is up to his old tricks. Kelly blows Jude’s story wide open to Mary and Roy but still, Mary gives Jude the benefit of the doubt and handing him the £800 tells him she’ll wait for him in the car.

Gemma’s blast from the past

Despite her feelings, Gemma urges Chesney to do something romantic for Emma. Chesney tells Emma to meet him in the urban garden later as he has a surprise for her (a picnic).

When Rita and Gemma hear noises coming from their flat, Gemma’s unnerved to realise someone has been rummaging in her bag. As Gemma unlocks the door of her flat, Chesney spots a hooded figure about to follow her in. Chesney leaps on the stalker.