What did Nanna wear during the war? 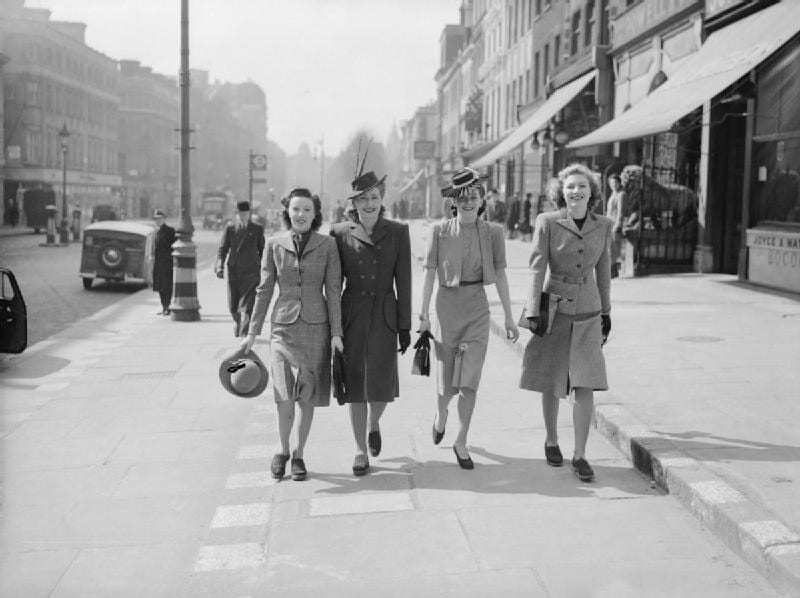 Imperial War Museum North is marking the 75th anniversary of the announcement of clothes rationing in Britain with Fashion on the Ration; 1940’s Street Style, an exhibition whichexplores how fashion flourished despite severe wartime restrictions

With the nation’s resources committed to the war effort, feeding and clothing the civilian population was achieved by strict government control, in the form of rationing.

The production of textiles and clothes was geared towards meeting the demand for uniforms and other military uses.

People had to make do and be creative with what little they had to create their own wartime style. Making your own clothes, and repairing and recycling them, became an essential part of wartime life.

Sewing and knitting were encouraged. Many women used furnishing fabrics to make dresses. Fashion staples such as silk were no longer available. Parachute silk was highly prized for underwear, nightclothes and wedding dresses. Women applied gravy browning to their legs to mimic the look of silk stockings.

Fashion on the Ration tells some wonderful stories – underwear made from a silk map, a bridesmaid’s dress made from parachute material and stylish wedge heeled shoes made from scraps picked up from a factory floor.

Imperial War Museums are encouraging people across the nation to mark this anniversary and the ingenious fashion of the era by digging deep into their family albums or speaking to parents and grandparents to discover what their family wore and by sharing these photographs and stories across social media using #WhatMyFamilyWore. Many of the contributions to the #WhatMyFamilyWore initiative are being shown as part of the exhibition.

Fashion on the Ration:1940s Street Style runs from 27 May 2016 – 1 May 2017 at IWM North. There will be a major series of events including a Fashion on the Ration Weekender on Saturday 4 and Sunday 5 June and an In Conversation event with fashion designer Wayne Hemingway and journalist Lucy Siegle on Fashion and Sustainability on 5 October.