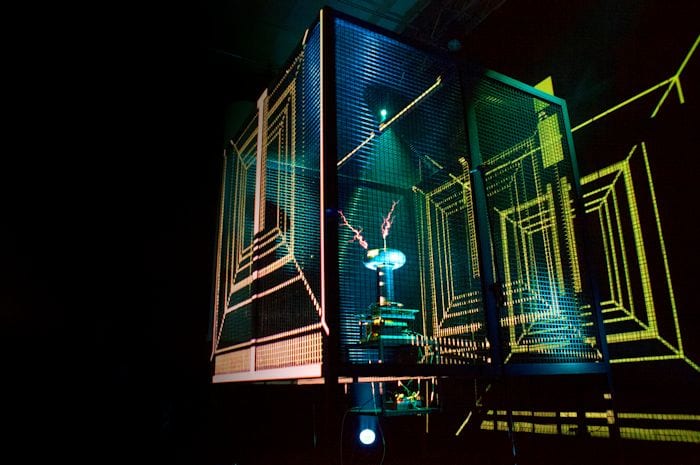 If you thought science is boring, think again.

An art and sound installation which explores the creative possibilities of the Tesla coil as a musical instrument is coming to Manchester.

Time to brush up on your GCSE science.

You’ve probably heard of Tesla, the world’s best known electric car manufacturer. The company is named after Nikola Tesla, probably the greatest scientist and inventor you may never otherwise have heard of.

Tesla filed more than 700 patents for everything from wireless communication to fluorescent lighting. The bulk of the world’s electricity systems used today by billions of people owe their existence to him.

But he’s not as well known as Einstein, Edison, and Marconi because, despite his scientific genius, he wasn’t a very successful businessman.

In 1891, he invented the Tesla coil, a device which renders electricity visible. Since its invention, the coil has been used in electrical lighting, phosphorescence, X-ray generation, radio transmitters and in various medical equipment.

Today, its main use is for entertainment and educational displays.

Artist Robbie Thomson has created XFRMR (pronounced Transformer), an installation which explores the possibilities of the Tesla coil as a musical instrument. It’s been performed all over the world – and it’s being unveiled in Manchester for the first time in February.

Inspired by the sounds of space weather and electromagnetic fields, the creation is housed in a steel Faraday cage and accompanied by audio-reactive projections.

Described as an assault on the senses, light fuses with sound creating a unique sensory experience. The performance is accompanied by a soundtrack of melodic and soothing, then pulsing, skittering and searing sounds while visuals from the coil send light signals flaring through the air.

“I’ve toured this set a lot over the past few years but this will be the first time I’ve shown the work in a museum setting,” says Robbie, who has had his work displayed across the UK and Australia, France, Indonesia, Mexico, The Netherlands, and South Korea.

“Supporting the Electricity: The Spark of Life exhibition is the perfect environment given that Tesla is often called one of history’s most important inventors, whose discoveries in this field were way ahead of his time and continue to influence technology today.

“In the show, I synthesise waveforms that manipulate the high voltage discharges from the coil to create live musical tones that are set against an underlying electronic score.

“The composition itself moves between soundscapes inspired by the sounds of space weather and percussive sections rooted in industrial music and techno.”

Robbie believes that it’s an important story to tell because of how much of an effect the technology has had on today’s science.

“The ways in which technology is being used to synthesise natural phenomena relates to so many aspects of where the frontier of science is at today.

“The boundaries between synthetic and natural worlds are constantly being tested, whether that be in artificial intelligence or nanotechnology – so it’s interesting to consider the nature of electricity and invisible wavelengths within this context, as it is something that we usually either ignore or take for granted.”

As a visual artist, Robbie says he was interested in high voltage devices but didn’t realise the Tesla coil also produced sound.

“I was interested in high voltage devices and so was drawn to using the Tesla coil on a visual level before I was really aware of its musical potential.

“The direct correlation of the sonic and visual elements and the real physicality of the coil as an electro-acoustic instrument – the air ionising to create sound and light – made it ideal to use in an artistic context.

“I think people will be surprised by how musical the Tesla coil can be. You can make it really expressive and create quite delicate timbres as well as distorted tones and harsh percussive stabs.”

With over 250,000 volt arcs produced by the coil, it’s a chance for you to experience raw electricity first hand.

“The Tesla coil is a visceral phenomenon to be up close to – and you might even smell the ozone being created from the sparks.

“Audiences for XFRMR have been really varied in the past. I’ve played in clubs where the emphasis has been on dancing – and in seated theatres where people have tuned in more to the nuances of the sound.

“I think there’s something there for anyone with an interest in electronic music and technology but also for people who are more visually oriented and want to experience a dramatic display of electricity.”

XFRMR will be performed at the Science and Industry Museum, Liverpool Road, M3 4FP, on February 15 2019.