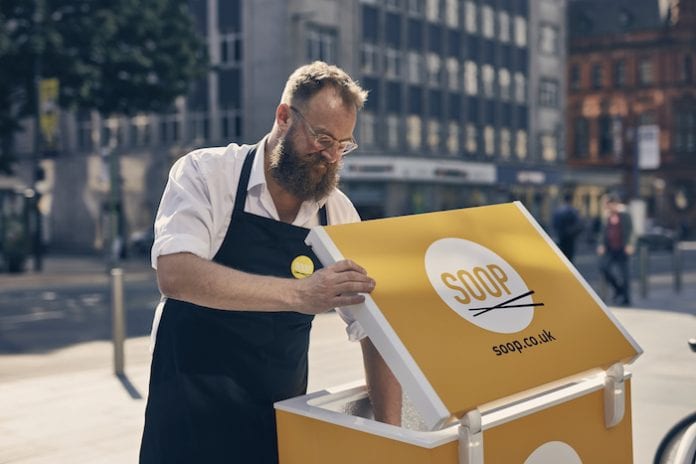 Hands up if you’ve ever stood in front of the wall of butties in the supermarket and wished for something a little more, well, a little more anything really.

And hands up if, like me, you give in and reach for the same old same old, promising yourself you’ll have something better tomorrow, but for now the desk and your to-do list waits for you.

Alex Markham, founder of SOOP, hopes to change that. His pots of instant noodle soups offer a full meal in a recyclable tub. They’re free from additives and full of goodness. Oh, and they taste delicious too.

“I used to run a company. I used to do video production,” Alex told me, “so a lot of the time I was out and about, on location. And because of the times I was working, I often struggled to find a healthy quick meal, something that was hot. I could go and get a sandwich or a salad, but any hot foods would be a bit fatty or a bit high in carbs – as were a lot of the delivery options.

“I started making noodle soups for myself, and started with a simple recipe using stock cubes.  I then started to make them for my partner, and some of his colleagues noticed that he was taking these into work. He asked if I’d make some for them. The idea kind of took root there.” 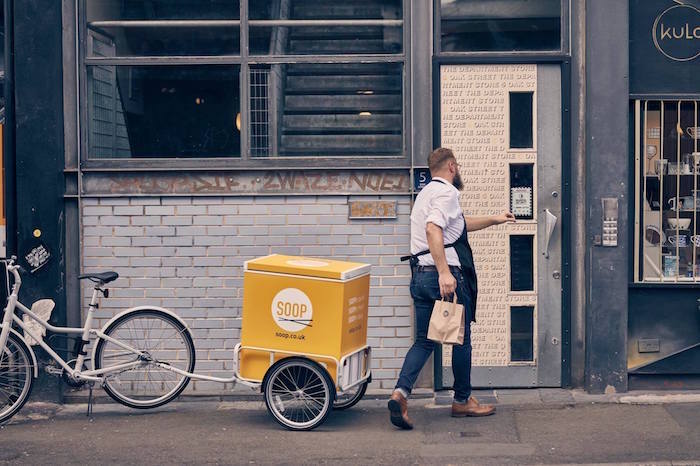 Once the idea was planted, Alex wanted to get it right.

“The number of different stocks and tastes and flavour combinations I’ve been through to get to this end result!

“All the flavours have been inspired by pan-Asian cuisine. I’ve not called them a ‘chicken laksa’ or something, because they aren’t. They’re all inspired by me and my tastes really.

“Everything is fresh. There are no artificial flavour enhancers – the pastes contain fresh ginger, coriander, fresh chilli, fresh garlic. Nothing is dried, with the exception of the spicy coconut chicken, which has dried coconut milk powder in it.”

Alex is currently doing it all from home and only started producing and delivering last week. 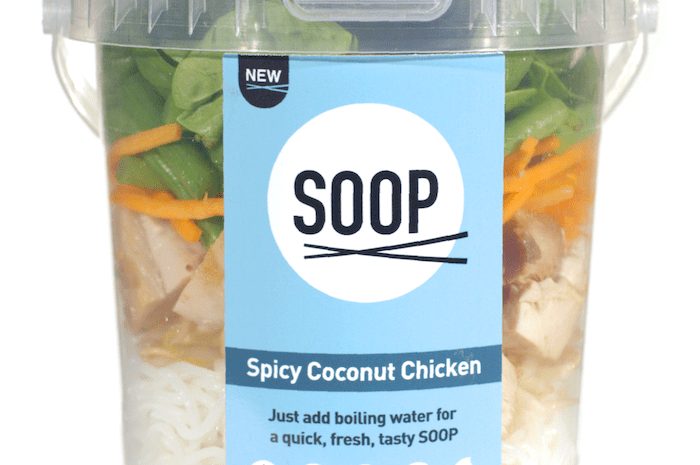 “It’s very much a handmade, homegrown one-man-band at the minute. I don’t come from a food background. I used to have a flooring company, I then started a video production company. I wasn’t really enjoying it though – I was doing jobs for the sake of doing jobs just to pay the bills. So I decided to do something that I’ve got a real passion for, which is food.”

“We started at the beginning of September, but the official launch is at the Manchester Food and Drink Festival.  What I’m really proud of is that four of our customers found us through social media and have bought from us every single day!”

At the moment there are five options, one of which is vegan.

“I want to add another veggie option, a vegetable dumpling with Chinese cabbage in a Thai style vegetable broth. And at Christmas I’m launching a seasonal one.

“At the Food and Drink Festival we’ll be launching our extras too. We have energy bars – which are a mix of low GI and high GI carbs, and we do protein yogurts as well, low fat Greek Yogurt with the addition of protein powder, so each little pot holds 30g of protein.

“I’d love to build up something that gets hosted on the high street, that’s the long term plan. But for now it’s me and my SOOP bike!”

SOOP is available online for you to order, and Alex will deliver it, courtesy of his SOOP bike. Order online before 11:30am, and you’ll get your delivery by 1pm the SAME DAY.