Vinny the Fox stopped off in Manchester today on his Battle Bus tour of Great Britain.

The seven-week-old fox – no relation to Megan – is touring the country in an audacious election campaign to encourage political candidates to join him in calling for a ‘cruelty-free future’.

Thousands of people have already ‘Voted for Vinny’ by asking election candidates if they will support his key policies – reject any weakening of the ban on hunting and support an increase in the maximum sentence for animal cruelty offences to five years imprisonment.

He was joined in Piccadilly Gardens by broadcaster, musician and writer Mark Radcliffe.

I'm in #Manchester with Mr @themarkrad (how cool is that?) He thinks we should #keeptheban, RT if you do toos https://t.co/bmVRw2XCJH pic.twitter.com/xGpoFqegkK

So what did the fox say? Well, nothing actually, because foxes can’t talk. Not even Vinny. Maybe it’s because he’s only seven weeks old. But in a fox pop his assistant communicated the following message:

People seem to be making a mess of things so I thought I should stand up and be counted. As a fox, it’s never that safe to stand up and be counted, but us animals need to do something before it’s too late. I’ll be going on the campaign tail to ask all the peoples and human candidates if they agree there should be a cruelty-free future for animals. I wouldn’t have thought many would disagree with that, but my mum says unfortunately I’m wrong.

Mark Radcliffe said: “It’s dispiriting to even have to have this argument all over again but we can never be complacent whilst there are vicious pressure groups who demand the inflicting of cruelty for their own fun. Join our campaign if you are a decent person who regards all blood sports as barbarism.” 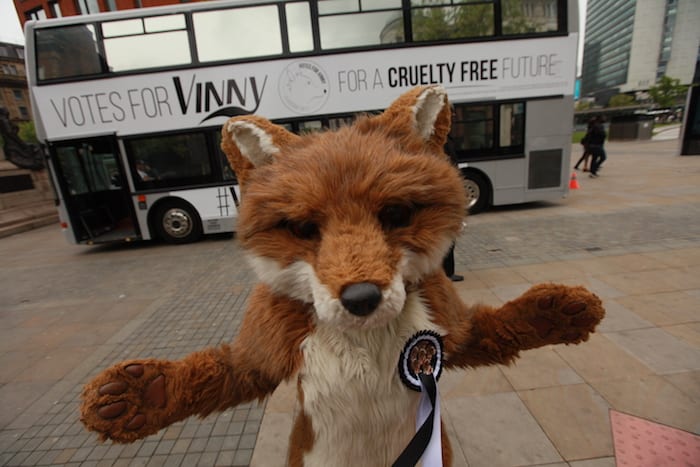 League Against Cruel Sports chief executive Eduardo Conclaves said: “Britain is meant to be a nation of animal lovers but right now a lot of animals are feeling unloved. There are moves to legalise the hunting of foxes, deer and hares, over ten years after the nation recognised that it is nothing but a cruel sport. Dog fighting is happening right here on our streets; and those people who inflict cruelty on animals get barely a slap on the wrist.

The League Against Cruel Sports has issued an election ‘minifesto’ which includes commitments on a range of animal welfare issues, including hunting, dog fighting, ‘gamebird’ shooting and trophy hunting.

The full manifesto can be seen at www.league.org.uk/election