Viet nom! Delicious new summer menu at Pho Restaurant is the perfect fit for any diet 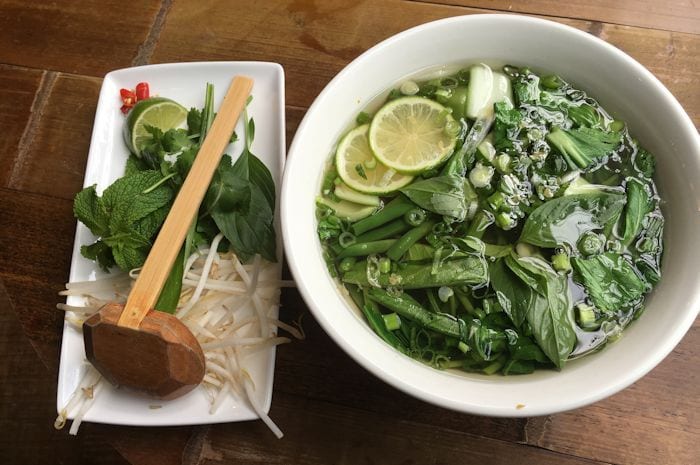 I first discovered my love of noodles at a kiosk run by Pho at Leeds Trinity Kitchen, so I was delighted when they opened a restaurant in Manchester last year.

The food at Pho is not what you would call posh. It’s the Vietnamese version of a hearty meal. It’s comfortable and welcoming, rather like the ambience. The décor is reds and browns, with worn furniture and low lighting to mimic the effect of a street side eatery. It’s much more understated than some of the other Corn Exchange restaurants with their bright colours but it draws people in. The tables are adaptable and in a canteen style. There are large and small ones – perfect for a group of any size or somebody dining alone. When I popped in for lunch recently, the customers were a mixed bunch, from couples to businessmen. 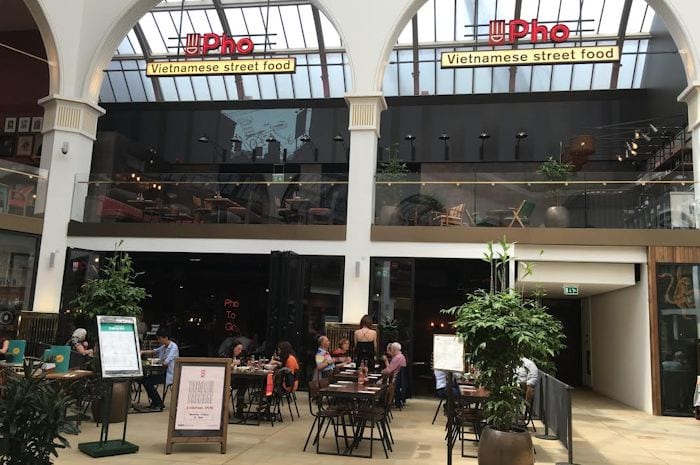 The new summer menu features a choice of three cocktails and six food options. The food menu offers a starter portion and five mains with a choice of veggie, meat and fish dishes.

Pho is a great place to come in a group because if there is someone with special dietary requirements or allergies you can bet there will be something tasty on the menu for them to enjoy. All the dishes are gluten free (accredited by Coeliac UK). Whether it’s egg-free, dairy-free, low fat, low in calories or vegan, they’ve got it covered. More about the food later.

The cocktails are made using premium, imported Vietnamese alcohol and are priced between £6.75 – £7.50. I tried the Hoi An Iced Tea (£6.75) mainly because their regular iced tea with mint and orange is my go-to afternoon drink whenever I visit. It’s a very simple but tasty and refreshing cocktail, sweetened by the lemon and ice whilst the Vietnamese vodka offers a smooth alcoholic taste. Its taste was not too strong, which means it is really good quality and that they have their quantities just right. 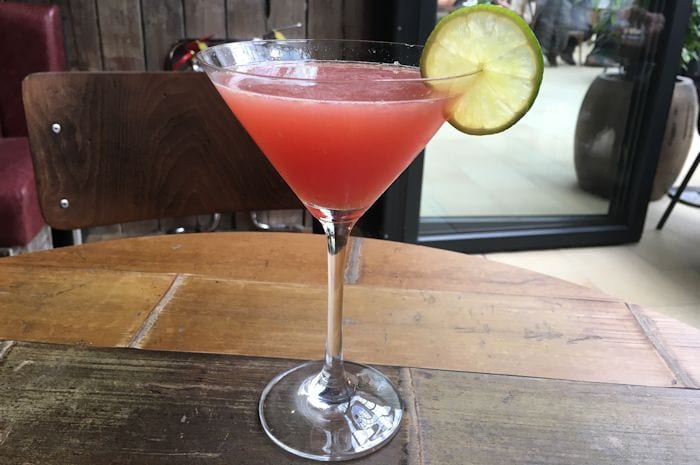 The Phu Ouoc Martini (£7.50) contains a clear rice spirit, orange and cranberry juice and lime, with a lime garnish. This cocktail is strong, fruity and classy. It has seeds from the freshly squeezed juice and it smells like rice and cranberry. It has a lovely pink colour from the cranberry and is very citrusy. Rice spirit is definitely something I would order again. 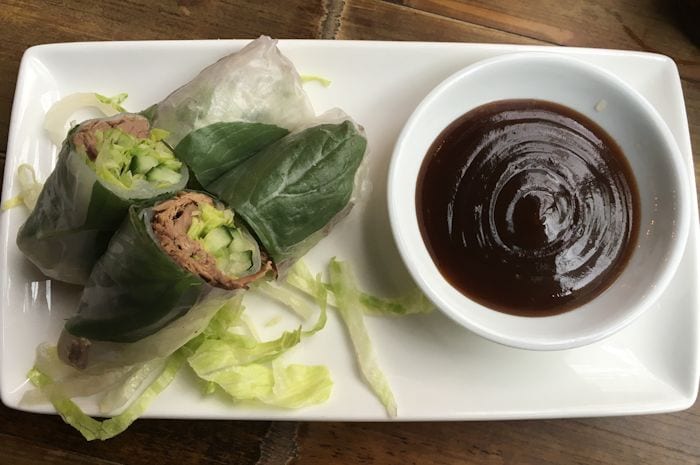 The smaller option, Goi Cuon Bo (£4.95), is fresh beef brisket rolls with cucumber and Thai basil and is served cold. It’s reminiscent of the standard duck hoisin rolls from Chinese takeaways but much, much better. The beef is less fatty and more tender than duck and there’s a good amount of it. The refreshing roll is nice with the sweetness of the hoisin sauce. Tightly rolled and with a mixture of textures, this is a brilliant starter and easy to eat for chopstick amateurs! 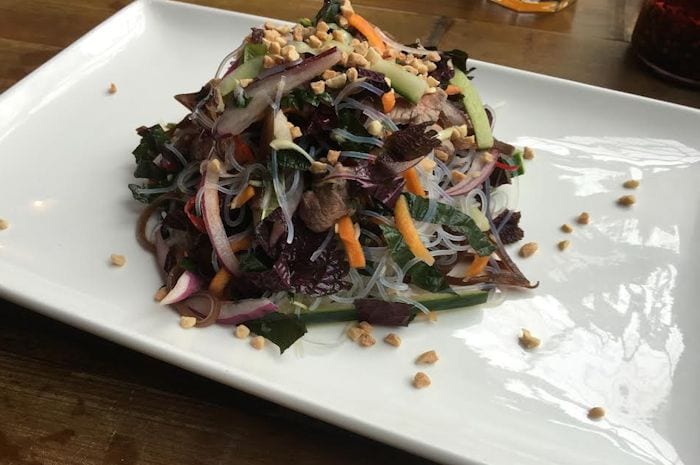 Goi Bo (£8.75 with a small percentage being donated to charity) is a beef noodle salad and is served cold. It comes on a white plate with the colours making it a striking dish. The translucent noodles are fun to eat and not too heavy. The chilli and lime dressing is clear and unassuming but really spicy, so beware! All of the ingredients are fragrant and fresh and cut into noodle-like strips to make it easy to eat with chopsticks.  The peanuts add a nice crunch. The beef is wonderful, cooked medium well and juicy. This is probably the first time I’ve ever had a salad in a restaurant and not felt like a rabbit. 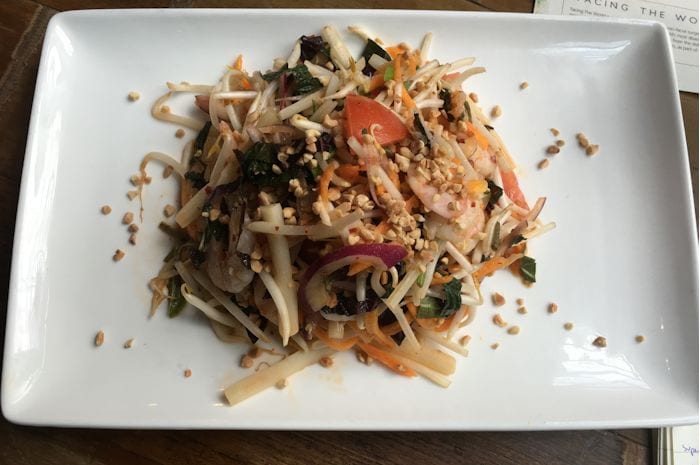 Goi Ngo Sen Tom (£8.95) is a de-tailed king prawn salad with beansprouts instead of noodles and tomatoes, making it juicer. It also comes with lotus stems which is an entirely new food for me. It tastes a little like celery and is crunchy in the same way. It has an aftertaste with a kick and an overall taste which is a little fishy. Certainly a very interesting food. As beansprouts are bigger than noodles this salad is larger than the beef one. It doesn’t come with a dressing but doesn’t really need one because of juicy tomatoes and richer flavours. 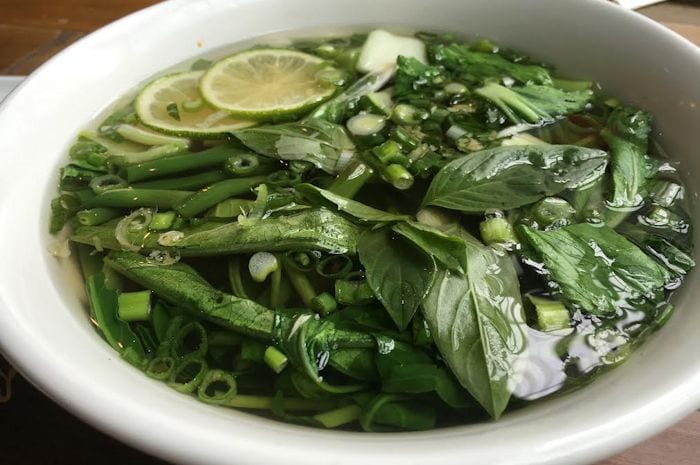 It would not be a visit to Pho without trying some actual pho – the noodle and veg soup which is the national dish of Vietnam. The Super Green Pho (£8.95) is a vegetarian dish and comes with a side plate of herbs and beansprouts. The vegetable broth is lightly salted and rich in taste and the meal is large and hearty. Despite not having any meat in it, it is not a dish you would feel like you were missing out on if you ordered it. Fresh vegetables are crunchy and as always there’s a large helping of noodles.

The pho from Pho is never a disappointment. It’s a comforting dish that is a beautiful celebration of a country’s most popular food. The normal menu offers a variety of pho – veggie or meat, spicy or the option of traditional extras. The new summer menu is just a glimpse of what the restaurant is capable of.

The food at Pho is fresh and healthy and wonderful for anyone to eat. The kind of food I wish I could make at home.