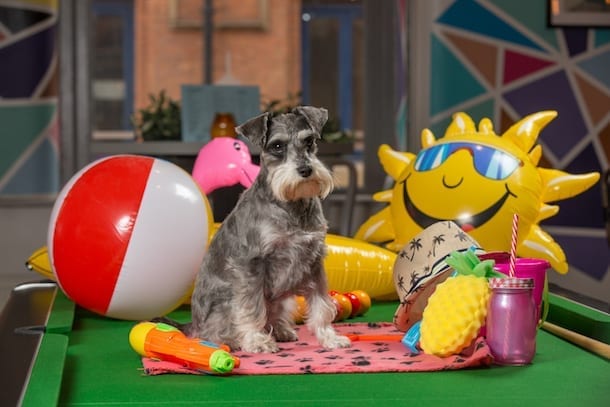 And there’s good news for the city’s dogs as they are welcoming all manner of pugs and mutts but with one catch – they must be no bigger than the ‘doggy doorman’.

“We have many customers who both live and work in the city, many of whom have pet dogs, so we are allowing urban pooches in! They must be well-behaved and we are being sizeist about it as we won’t let any puppies in that are bigger than our ‘doggy doorman’ height bar!” says owner, Tim Coulston.

New features include private booths that can now be hired, new pool and football tables and a photo-booth for indoor fun, while the sundowners terrace is great for outdoor play and cocktails.

The food offer has also been given a hot summer makeover with customers able to tuck in anywhere in the bar/restaurant with the chance to build their own burger or dog starting from just £8 for a beef, chicken or vegetarian spicy bean patty or hotdog, to which you can add a fantastic range of cheese, meats, veggies, pickles and sauces, to create the perfect burger for them.

What’s more there’s 50% off food throughout June so Mancunians can tuck into the new dishes as well as Urban Cookhouse’s famous Urban Legend burgers and other classic NYC delicacies, including its hallmark Freddy’s ribs, wings, dogs and disco fries.

Also newly launched is a £5 lunch deal that runs weekdays from noon until 3pm throughout summer and Urban Cookhouse’s own unique take on afternoon tea with its ‘New York Afternoon Tea Party’ that includes mini burgers, wraps, nachos, New York cheesecake, chocolate brownies and a choice of beers or prosecco for just £15!

“Our food has got to be some of the best authentic NYC for the best price in Manchester so we’ve tweaked our menu with new additions such as the ‘build a burger or dog’ and our ‘New York Tea Party’ and are giving customers 50% off in June so they can see what we’re all about,” said Tim.

The cocktail menu has been given a summer makeover, too, with drinks starting from just £3.50, and a happy hour every day from 5pm until 8pm, with offers including two beers or two glasses of prosecco for £5 (bottles £15) and bottles of wine or two cocktails for £10.

With a late license (it’s open until midnight weekdays and 2am Thursday through to Saturday), a trademark loft lounge and bar and extensive cocktail list, it’s a favourite destination for Manchester’s party people including nearby offices, students and the gay village and will be launching pool parties and club nights this later this month.