Unusual restaurant concepts & dining experiences yet to open in Manchester

Do you like nibbling in the nude or dining in the dark? For some people, dining out is all about the food. For others, it’s just not enough 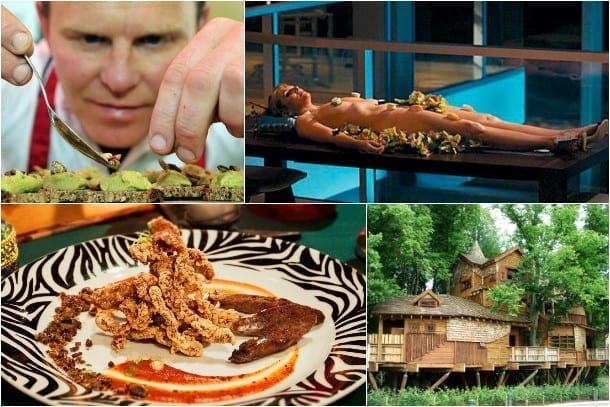 So when Menagerie opens at One New Bailey in June, it willmake it straight to number one in the list of Manchester’s most unusual dining experiences – mainly because this new Salford restaurant will have dancers pouring champagne from the ceiling.

London and New York City lead the race in way of unusual dining experiences. Here’s to name but a few that are yet to open in Manchester…

Get your kit off

No trainers. No jeans. In fact, no clothes at all. That’s the dress code at The Bunyadi, a pop-up restaurant set to open in London for three months in the summer. Hope the fire alarm doesn’t go off when people are dining there. Fancy it? Join the queue, this naked restaurant now has almost 30,000 people on the waiting list.

This is a ‘truly human and sensory culinary experience’ in London. Eating and drinking in pitch darkness. Dans le Noir Restaurant in London is a concept that suppresses the sense of sight and enter a world in which one is uncertain of their surroundings. Don’t worry, though, there’s blind guides to lead you through the ‘gastronomic and pedagogical journey’.

Eat in the trees

As treehouses go this one is pretty spectacular. The Treehouse Restaurant in Alnwick, Northumbria, is unlike any treehouse we’ve seen before but it’s definitely made from wood and it’s in the trees. And there’s a roaring log fire in the centre of the room with trees growing through the floor.

The Marsden Grotto is an old smugglers cave converted into a restaurant and bar near South Shields. But the menu is strictly non-paleo – unless prehistoric men and women ate fish and chips and garlic bread.

Sick of steak? Fed up with fish and chips? How about crocodile wrapped in vine leaves, honey poached plums and pickled samphire, just one of the delicacies served at Archipelago, ‘London’s culinary portal to world cuisine.’ Sounds good but we couldn’t eat a whole one.

Adding a whole new meaning to the word grub, currently on the menu at Grub Kitchen in Pembrokeshire are sweetcorn chowder with basil oil and a grasshopper crumb (£5.50), zesty black ant and olive crusted goat cheese (£6.50), and smoked chipotle cricket and black bean chilli (mild) with polenta, tortillas and a sour cream bamboo worm dip (£14.50). If there’s a fly in your soup at this place, don’t complain. It’s probably a garnish.