Tributes for David Meek: Manchester United writer for 37 years dies at the age of 88 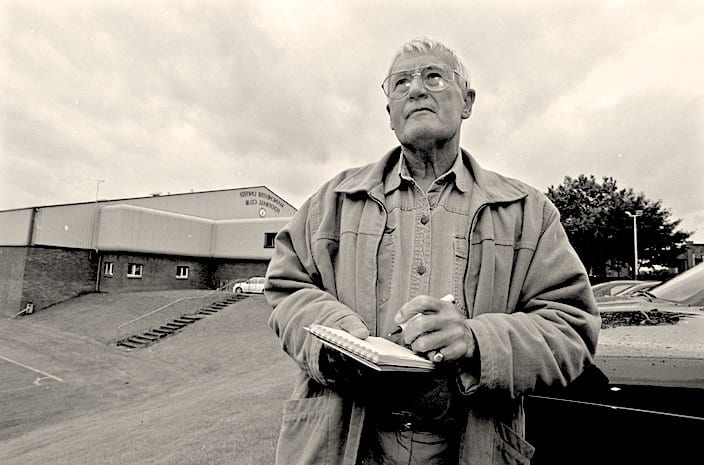 David Meek, the highly accomplished sports journalist who covered Manchester United for the Manchester Evening News for 37 momentous years from 1958 to 1995, has died. He was 88 and had been ill for some time.

His was the job every football writer aspired to. But David, who also ghosted the United Review programme notes for every United manager from Sir Matt Busby to Sir Alex Ferguson – was cast into it not through ambition, but by one of the sport’s blackest ever tragedies: the Munich air disaster.

Had the plane not crashed, David was in line for a very different journalistic career. As editor Tom Henry’s assistant, he was following in the footsteps of one of the greatest journalists of his time, Sir Harold Evans, who filled a similar role before going on to become the great campaigning editor of the The Sunday Times and The Times.

David Meek, legendary Man United reporter on the Manchester Evening news has died at the age of 88. He started the job just after the Munich Air Crash in 1958 and retired in 1996. pic.twitter.com/kRn5WvLUKd

Among the 23 fatalities – including eight of the young and talented “Busby Babes” and eight journalists – when their Airspeed Ambassador plane crashed on take-off from their Munich stopover as the club was returning from a European Cup match in Belgrade, was the MEN’s United reporter Tom Jackson.

David, who at the time was the newspaper’s leader writer and specialised in politics, later recalled that until the horrific news of the disaster began to filter through on 6th February 1958 “it had just been another day at the office”.

In a 2015 interview for the MEN with his successor, Stuart Mathieson, he said: “Obviously the death of Tom Jackson left a tragic void on the Evening News sports desk. My job at the time was writing about politics and producing the daily opinion piece for the leader reflecting the Editor’s views.

“But Tom Henry knew I had done some football writing on my previous paper, the Yorkshire Post, and soon after the accident he asked me if I would abandon politics and take over as the United reporter.

“Obviously in that kind of emergency you do what you can to help, in fact I quite got to like the job which I did for the next 37 years.

We are saddened to learn that former journalist and friend of the club, David Meek, has passed away. David covered United for over 50 years, was a long-time United Review columnist, and helped write Sir Alex's programme notes. Our thoughts are with his loved ones at this time. pic.twitter.com/VM3701EKs2

David joined the Evening News in 1956, and though a career as a football writer was “not even on the horizon of his thoughts” he soon realized that something special was stirring around Old Trafford.

He told a Guardian interviewer: “My soccer experience had been limited to the modest endeavours of York City but friends persuaded me to go with them to watch Manchester United and that was when I realized the Matt Busby has launched a visionary concept on an unsuspecting football world.

He admitted that his early times in the job were strained; he was a newcomer and the club itself had been shattered by tragedy, but their relationship prospered through the glory days of George Best, Bobby Charlton and Denis Law at the zenith of their spectacularly successful careers.

It wasn’t always plain sailing. There were the controversial final days of George Best’s career at Old Trafford, the passing of Busby and the stuggle to find a successor, but through it all, David remained scrupulously fair and one of his profession’s true gentlemen.

Sad to hear of former MEN Chief United writer David Meek’s passing. Many United fans’ bookshelves will feature his work dating back to the 60s pic.twitter.com/cCihDoCzPp

His relationship with United’s most successful manager, Sir Alex Ferguson, was a fascinating one, for the Scot’s early times at Old Trafford were difficult and there were calls for his sacking.

David later told the BBC: “I nailed my colours to the mast three years into Sir Alex Ferguson’s trophy-laden 26-year reign as manager of Manchester United.”

But this was before all the silverware started to arrive. It was in fact a turbulent time, as the Reds sank into the bottom half of the table after a run of 11 league games without a win, despite spending a lot of money on players like Gary Pallister, Danny Wallace, Paul Ince, Neil Webb and Mike Phelan.

They just weren’t gelling – perhaps too many new faces introduced too quickly – and the mood was captured by one unhappy fan who held up a bed sheet at Old Trafford on which he had painted: ‘Three years of excuses and we’re still crap, ta-ra Fergie’.

The knives were certainly out as United approached the third round of the FA Cup with a tricky tie at Nottingham Forest and injuries to key players.

Television commentator Jimmy Hill even said United looked like a beaten team in the warm-up. Ferguson’s first game in charge of Man Utd was a 2-0 defeat away at Oxford United.

Sir Alex Ferguson once said David Meek was 'Part of the fabric of the club.' pic.twitter.com/17tnSeHGIo

Said David: “My editor at the Manchester Evening News ran a phone-in asking readers to vote on whether Ferguson should be sacked. The result of the poll showed a majority in favour of him going and I was asked to write a story accordingly.

“In fact, what I did was argue that if you deducted the votes of Manchester City fans wanting to cause mischief and you took into account the United supporters who couldn’t be bothered to ring in, you were left with an overwhelming vote of confidence in Alex Ferguson.

“It was all very tongue in cheek on my part and my editor wasn’t best pleased, but it went into the paper before he could do anything about it. That was the moment I became a ‘Fergie man’, close enough to help write his programme notes for 26 years.

“It wasn’t just blind loyalty, though, toadying up to the manager – more a conviction that given time he would come good.

“For I knew all the far-sighted work he had done behind the scenes, putting an end to the drinking culture by transferring Norman Whiteside and Paul McGrath, and totally reorganising the youth set-up which was about to deliver the enormously promising FA Youth Cup-winning team containing players like Gary Neville, David Beckham, Ryan Giggs, Paul Scholes and Nicky Butt.

“My support for the manager at a critical time in his career established a trust that would prove enormously helpful in 37 years covering Manchester United for my paper and, after my retirement from the Evening News, as a freelancer writing about the club, helping to set up the United museum at Old Trafford, and scripting the panels for the Munich tunnel.”