Vegan cuisine served up by local hero, MasterChef finalist Jackie Kearney was on the menu at Tampopo for the launch of her new book, Vegan Street Food. Emily Oldfield popped in to try some…

Jackie Kearney is a chef, author, creator of The Hungry Gecko vegetarian dining club and a street food enthusiast. Hernew cook book Vegan Street Food: Foodie travels from India to Indonesia, is a celebration of the fresh, meat-free cuisine she encountered in her travels across Asia.

She’s a chef known for her adventurous flavours and funky street-style service, as she proved in becoming a British Street Food Awards 2012 runner-up for best main dish, as well as touring round with Barbarella, her trusty trailer.

This was the first time I’d been to Tampopo’s Corn Exchange restaurant since its revamp in December. It now boasts a bold, bright interior. The classic communal benches have gone, replaced with chilled-back tables. The atmosphere is warmer and more intimate than before.

The menu consisted of a selection of appetizers and main courses from Kearney’s book served street food style. The wide choice of dishes seemed to unravel her impressive travels and was rich in influences from Sri Lanka, Laos, Indonesia and Thailand.

First to arrive were the Pani Puri Pops, delicious little morsels of unleavened bread with a chilli kick, followed by a Thai style BBQ tofu skewer. 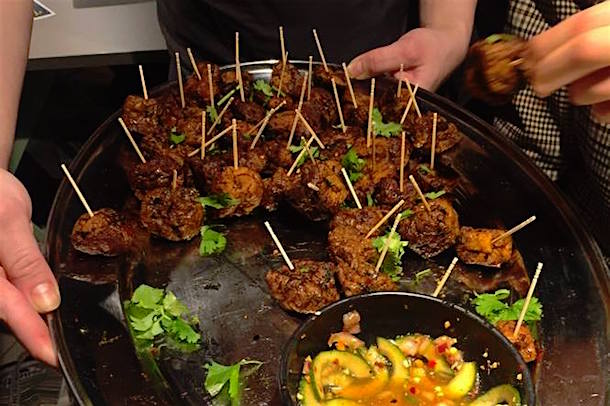 Kearney’s recipe certainly succeeded in turning tofu (the food I’m usually bullied about, being a vegetarian) from a block of bland meh into a sweet ‘n’ smoky combination which melted in the mouth.

The Tom Yum Shots were not for the faint hearted and proved that vegan doesn’t have to be boring. I knocked back the dinky shot glass of spice-steeped tomato broth, relishing the burn so much that I even had a second!

Kearney’s cookery shows that vegan food can provide a real feast for the senses, without the need for animal products. Most of her recipes are authentically vegan, as the cuisines of many of the East Asian cultures she visited focus on the power of pulses, spices, fresh fruit and vegetables – great news for those trying out flexitarianism, or just a New Year health kick.

I couldn’t believe my eyes when I saw one of the first main course options to arrive – Jackfruit Rendang. Not only was the fruit new to me (I’ve since learned it’s the national fruit of Bangladesh), but served complete with a curry sauce, seasoned with spices and coconut. And it was surprisingly, almost suspiciously, close to the texture of cooked chicken!

The selection of foods showed the potential of animal-free options to incorporate comfort food features along with Far Eastern flavours. For example, people’s favourite rice and breads were vegan, whilst simple ingredients such as local lettuce were boosted with fillings as interesting as Vegetable Laab.

Our table missing out on the Smoky Tofu Martabak and also a mushroom claypot dish we were particularly looking forward to. Whether there had been a last minute change or a shortage of food we weren’t quite sure, but what we did try we enjoyed.

This was food which fuelled me with some great ideas for outsmarting my meat-eating friends – though whether I would be capable of recreating Kearney’s great flavours is another matter.

A lingering question could be whether the evening enough to persuade meat-eaters of the power of vegan food? You’ll have to find out for yourself, and Kearney’s book is an ideal place to start.

But one thing is certain. This was a showcase of culinary creativity which celebrated the power of street food. To see Kearney joining guests at the tables afterwards was a welcome touch – positively glowing with enthusiasm for this kind of cuisine.