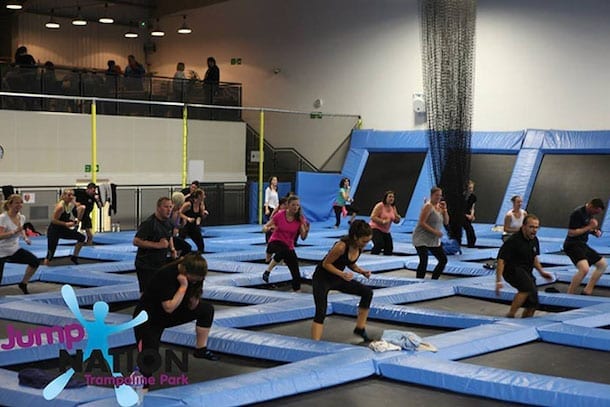 Trampoline parks: the cellulite busting, muscle toning, endorphin producing fitness sensation that has swept the US and Australia, are now proving to be a hit in the UK – and we’ve got one here in Manchester…

A trampoline park is essentially a warehouse filled with trampolines. Usually a foam pit amongst other activities. There are now five in the UK, three down South, one in Scotland, and Manchester’s Jump Nation. Aside from being a whole lot of fun, the health and fitness benefits people are getting from bouncing are accordingly phenomenal.

Brian Fisher, 64, of Worsley could be described as a 21 year old trapped in an older body. He’s a regular at Jump Nation’s fitness classes as well as occasionally going in to bounce. Without dieting, he’s lost well over a stone since ditching the gym for Jump Nation over the last month or two.

“It’s very good because there’s no impact on the body – my brother’s a fitness fanatic and he’s always out running but he’s always got problems with his legs!”

Brian’s quite right – unlike other sports, the trampoline springs take away up to 80% of stress from your weight bearing joints, meaning they are protected whilst your muscles are still working hard (making it ideal for seniors and people recovering from injury as well as for general weight loss and toning).

Even NASA agree: they train their astronauts on trampolines, and conducted a study which proved it’s 68% more effective than jogging, making a 10 minute bounce just as good as a half hour run.

It’s great for mental health too; the excitement and weightlessness that people experience trampolining means the brain releases more endorphins than it would during other forms of exercise. This makes trampoline parks a hive of activity and excitement, and a fun-filled way to spend a few hours with the family. Brian first visited Jump Nation with his girlfriend, now he’s a regular there and he can’t keep his grandkids away from the place. He adds: “Every time I leave that building, I feel great”.

There you have it, it exists – a place that really fuses fitness, fun and family. No longer must we painfully jog through traffic in the rain alone, we’ll just take the kids for a bounce!