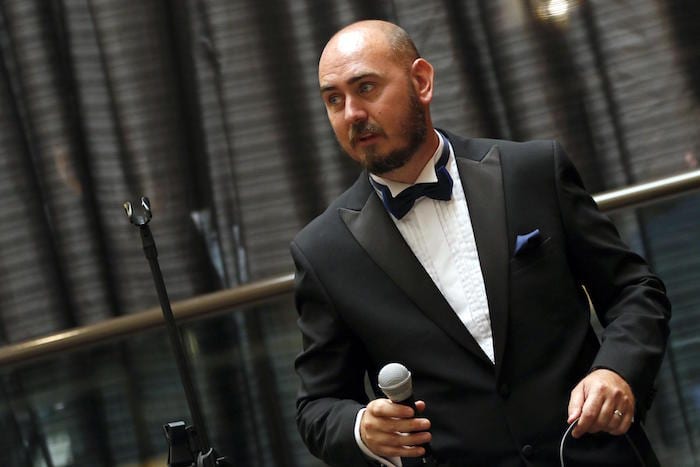 Wayne Devlin is a man of many talents. He’s no stranger to the screen, having had small roles in Peaky Blinders, Citizen Khan, Happy Valley, Emmerdale and Hollyoaks. And he is currently auditioning for bigger acting roles to add to his resume.

Although acting is his first love and a career he would like to pursue, you may have heard him pelting out some beautiful notes at the Trafford Centre bandstand over the years.

And singing has enabled the man dubbed Trafford’s Frank Sinatra to help raise a whopping half-a-million pounds for charities across Manchester.

The father-of-two has performed at the Greater Manchester Mayor’s Ball for Andy Burnham’s Manchester Homelessness Fund helping to raise an amazing £90,000 towards solving the homeless crisis in Manchester.

He reckons he has helped raise money for so many charities and community groups it would be virtually impossible to list them all. But to give you an idea of his public-spirited nature, it includes The Royal Manchester Children’s Hospital, The Alex Hulme Foundation, The Greater Manchester Mayor’s Homelessness Charity, Beechwood Cancer Care, and The Jo Cox Foundation.

“I believe that charity begins at home and Manchester is very much my home,” says Wayne. “I love supporting all I can in Manchester and especially in my part of the city – Trafford.”

To mark the impact he has made in the community, he was invited to the Queen’s Garden Party at Buckingham Palace in May this year with his wife Val.

“It was one of the best days of my life, apart from my wedding,” says Wayne. “We saw the Queen, Prince Andrew and Prince Edward. I felt totally humbled and honoured to be a guest at such a fantastic event. I will never forget that day!”

Wayne, 42, was born and raised in Urmston and lives a stone’s throw away from the house he grew up in. Hhe has been awarded the Urmston Recognition award, The Pride of Urmston Award and, in 2014, was one of the 40 Faces of Trafford chosen to celebrate the fortieth anniversary of the creation of the borough.

“I wouldn’t live anywhere else,” he says.

As well as raising thousands of pounds for charity, Wayne’s Rat Pack-style vocals have made him the go-to singer for top celebrities including The Cheshire Housewives, Coronation Street’s Jimmi Harkishin and heavyweight boxing champion Tyson Fury.

You can see and hear him in all his glory at Hale Barns Christmas Concert on Sunday, December 16th where he will be performing a set full of festive favourites alongside The Voice Star Scarlett Quigley.