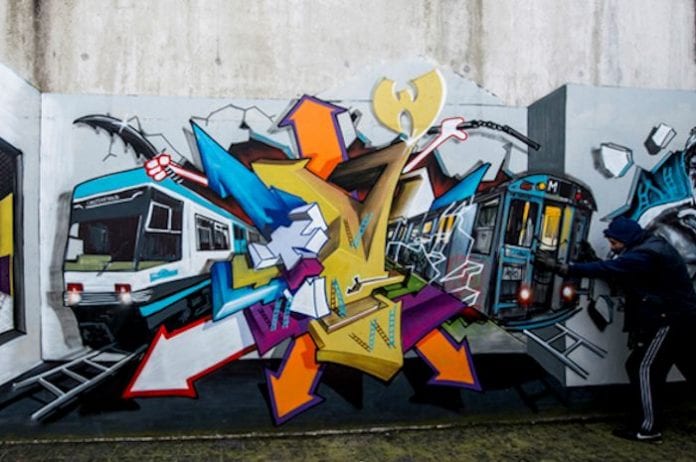 One of Manchester’s most prolific street artists will be putting on a live street art performance in Piccadilly Gardens on Tuesday 23 August between 10am – 4.30pm.

Kelzo’s one-of-a-kind artwork will portray the Vimtoad, Vimto’s cheeky northern toad mascot, in a stunt inspired by the soft drink’s latest TV ad, featuring the Vimtoad in a fruit fight with his nemesis, the Mixtoad.

Vince will be spinning the Vimtoad’s favourite chart topping tunes to keep the party atmosphere going.

Free samples of Vimto’s Jelly Beans will be distributed to passersby, who are invited to come and watch the live art work unfold. They will also get the chance to enter a competition to win a free DJing lesson.

Kelzo first gained notoriety when he turned Hulme into one of the biggest outdoor graffiti art galleries in Europe. He has appeared in countless magazines, documentaries and books and has been commissioned by some of the largest companies in the world, as well as working regularly on set designs for the BBC.

“There is a lot of affection for the Vimto brand in the North West as it is the birthplace and home of Vimto,” said Kelzo. “It’s really nice to support this project as it has such a strong local link.