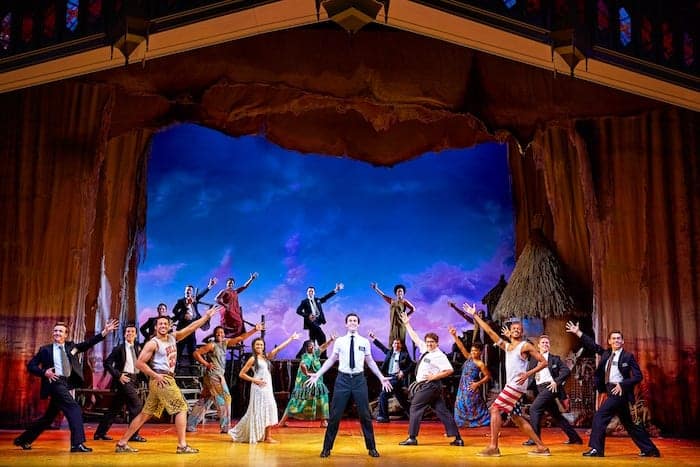 Unless you’ve been living under a rock for the last few months, you’re probably aware that the Mormons have descended upon Manchester.

No, not the ones that come knocking on your door. We’re talking about the singing and dancing kind. The ones who have won nine Tony Awards and four Olivier Awards (including Best Musical for both) and who have been dominating the West End and Broadway.

We’re talking about the musical The Book of Mormon, the unmissable show from Trey Parker and Matt Stone, creators of South Park, and Avenue Q co-creator Robert Lopez.

It’s the hottest ticket in town and they are flying out fast for the show at the Palace Theatre, so make sure you see it before time is up on August 24th.

Luckily for you, we have some top tips on how to secure your own tickets for The Book of Mormon in Manchester.

Get the best value tickets

Make your first port of call the official site. There you can find the best prices from the most reliable source: the origin. Midweek performances and the Friday matinee are usually the cheapest, so you may have to pull a sickie or book a day off. We promise it’s worth it. Simply head over to The Book of Mormon website and pick a date that works for you.

Okay, so pulling a sickie isn’t really for you. That’s fine. If you’re really keen to go on a weekend, make sure you take a look at August first as there are more seats remaining than July. Do bear in mind that the final performance in Manchester is Saturday 24th August, so if you miss the cut off you’ll have to book for their next stop, Sunderland. Alternatively, make a trip of it and go see the show in Amsterdam from September 26th.

Keep an eye out for the cheap seats

This probably goes without saying, but make sure you keep a watch out for the cheaper seats. ATG (the group behind the Palace Theatre) have made that even easier for us by offering guaranteed seats at £13 for each performance! Between them and the show itself, The Book of Mormon have managed to ensure that they have more cheap seats at £13 than most other shows! They even have a handy calendar where you can see which dates still have £13 seats remaining. Check the calendar.

Are front row seats the only thing that will cut it? Or do you just like a bit of spontaneity in your life? Well, luckily enough for you, there’s a daily lottery for £15 front row seats.
Applications are accepted 2½ hours before the performance. Then, half an hour later (and with 2 hours to go before curtain), the winners are drawn.

In order to enter, you’ll have to show at the Palace Theatre in person, with valid photo ID. You’ll have to physically be there to enter and then when the lottery is drawn, so don’t go for a wander in between. To get a feel for how it will go down, here’s a video of the lottery process on Broadway.

Grab your buddies and go as a group

Did you know that a lot of theatres offer group discounts? If you manage to convert 7 other friends to The Book of Mormon, you can apply for the group discount via ATG’s enquiry form and save up to £15 a ticket. Fill in the usual details – name, email, number etc. – as well as the performance date and they’ll get back to you with how you can get the tickets. You can also phone the Palace Theatre directly on their group bookings line 0333 009 5390.

So what are you waiting for? If you haven’t already got your ticket, there’s no excuse now.