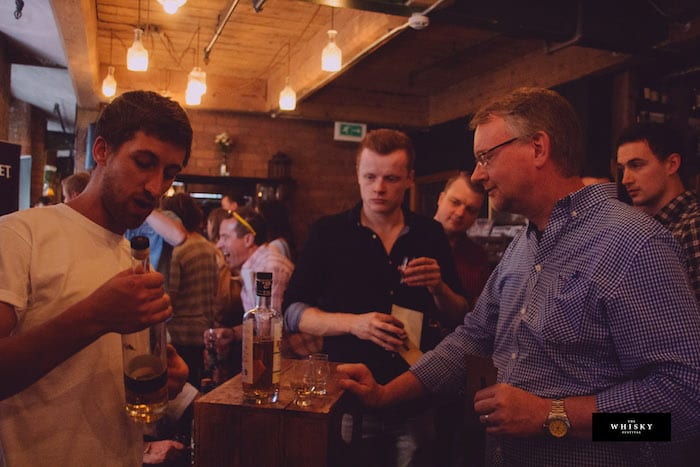 Whiskey is a drink like no other. It gives people a certain image or demeanour – depending on what it is they’re drinking, of course. It’s a spirit The Whiskey Jar brought to the Northern Quarter in emphatic style three years ago. The bar has gone form strength to strength and is holding its second whiskey festival this year.

Just for the record, I used to work on behalf a few Scotch distilleries and I do understand the difference between whiskey and whisky. For the sake of convenience, we’ll be going with whiskey for the duration of this piece.

“Whiskey is a tricky subject, it definitely has a stigma around it,” says Nick of The Whiskey Jar. “Many people instantaneously say they don’t like whiskey. I think your palate needs to acclimatise to the taste. The problem is that for many people their first whiskey experience involved something quite nasty and they’ve carried on that association.”

A bottle of grandad’s Grant’s can be enough to put anyone off but unfortunate events like that haven’t stopped the cool venue from establishing itself on the NQ scene.

“We came to realise quite quickly after we opened that people liked us as a cool bar and wanted to hang out on the weekends but over time we saw more and more people come in during the week to learn and ask questions. We began to see a lot of whiskey converts.

“Whiskey wasn’t really a thing in the Northern Quarter when we set up. We saw it as a challenge and thankfully the local community have to taken to us and now we’re we have the biggest whiskey collection in the north west.”

If you’re wondering how many that is, there’s over 400 bottles behind the bar.

“We usually put on one or two tasting sessions a week and we get a lot of group an individual enquiries,” says general manager Mike. “The festival however allows us to offer a lot more value for money and showcase more great drinks.”

Lots of well known brands as well as independents will be represented and the bar will of course be stocking everything from Scotch to Bourbon, Japanese to Welsh and even the odd English whiskey.

“This festival is for everyone. Beginners can speak to brand representatives and be guided into something that suits their tastes. They’ll be able to sample drams from different categories and hopefully leave with a new and deep appreciation of the spirit. We’ll be serving whiskey based cocktails and beer of course, but whiskey is the core drink. People who drink rum and vodka with mixers may find a different combination that works for them.”

The fest will take place over The Whiskey Jar’s two floors and outdoors area. The bar itself is closing temporarily at the beginning of October to allow for refurb and expansion.

As for the festival itself, it will start around midday and ends at 9pm. The bar will stay open for the rest of the night. Building on the success of their summer festival, The Whiskey Jar will adapt not only for seasonal tastes but also take on board extensive feedback from the previous events, making for an altogether more enlightening and enriching whiskey experience.

Booking the Monday off work is not a necessity but advisable.