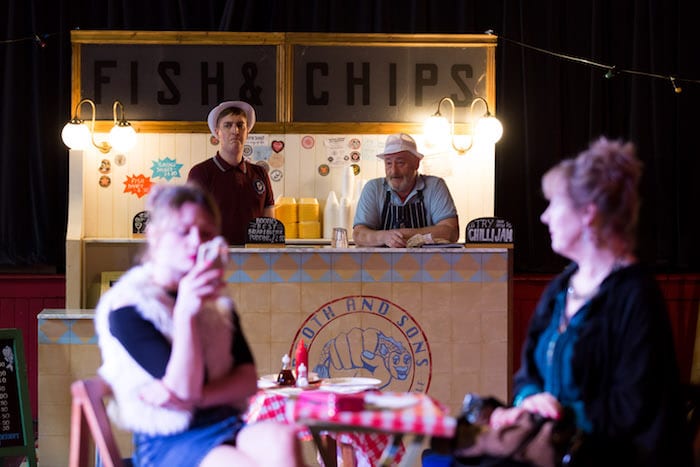 Becky Prestwich is one versatile and busy writer. She works on Holby City and Doctors and her plays have been produced at White Bear Theatre Club, the Old Red Lion, Bolton Octagon and Theatre 503. Her first radio play, Chopping Onions starring Maureen Lipman was broadcast on BBC Radio 4 in 2013. Her second, Aliyah starring Gillian Bevan, was broadcast in 2015. Chip Shop Chips, a play commissioned for Box Of Tricks, is currently on tour and heading to Manchester next month.

We caught up with her to talk about the play, what inspires her to write, battered halloumi and chips – yes it’s a thing – and the city she loves. 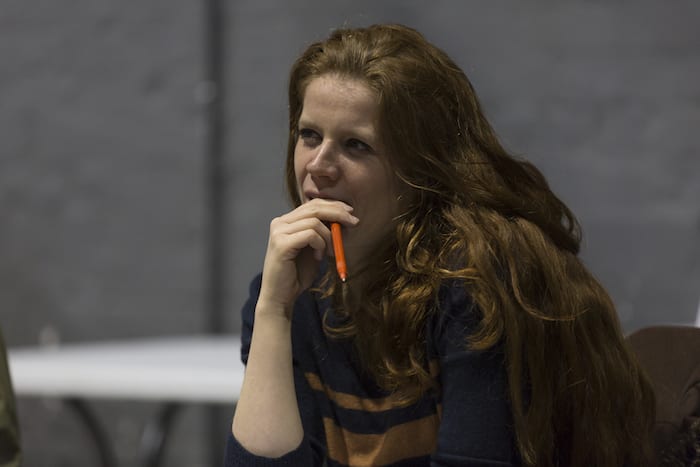 Many people get into a writing via a teacher. Was it the same for you?

My mum’s a writer and for years that made me very determined not to be one. I saw myself as a creative person and just doing what my mum did for a living didn’t feel that creative. So, my first career was in theatre – working in participation and learning. But I couldn’t resist writing. I wrote bits for the young people I worked with and in my spare time I wrote for myself too. I sent my first full length play to Box of Tricks (way back in 2007). They staged it at a pub theatre in London and I loved seeing something I’d written come to life. So I kept writing.  Eventually, it felt like time to give up my day job and admit I’d turned out to be a writer after all. My mum was delighted.

Where do your ideas for plays come from?

That’s the million dollar question! I do a lot of people watching and a lot of eavesdropping. With Chip Shop Chips, the idea first came to me when I was pregnant and having a lot of carb cravings. I was in a sit-down chippy and I was struck by what a fantastic place for people watching it was.  I liked the idea of the story playing out while the audience ate. And straight away I knew it would be a story about family and falling in love.  Once I’ve got an idea I tend to start by fleshing out the characters – who they care about, how they speak, what kind of shoes they wear, what they’re ashamed of, whether they’ve ever been in love – and most importantly what they want. Once you know your characters inside out, their journey to get what they want will drive the story.

Are you involved with the casting process also?

Chip Shop Chips was a very collaborative process and so I did sit in on auditions. It’s always incredible to watch actors bring to life these characters who have just existed in your head. It’s a real privilege to see different actors interpret the characters and we were incredibly lucky with cast for Chip Shop Chips. They’re all fantastic, the kind of warm engaging actors you want to spend your evening watching.

At what point can you sit back and enjoy one of your productions, without listening to every line?

It depends who I’m watching with. If my mum’s in I’m always nervous! Sometimes though, you can almost forget it started off as your play because the show takes on a life of its own. I love that, when the play starts to take you by surprise.

Who are your favourite writers and why?

I have a long list of writers whose work has stayed with and inspired me – Tennessee Williams, Simon Stephens, Shakespeare, Alan Ayckbourn, Lorraine Hansberry, Willy Russell, Bryony Lavery, Abi Morgan, and Alan Bennett. But at the top of the list would be Chekhov because his characters are funny and flawed and heart-breaking and for me. That’s the holy grail.

Manchester is such a creative city. How does it inspire you to write?

The thing about Manchester is that it’s a city that’s proud of itself. Its football clubs and its music and its swagger and its radical history. I remember watching 24 Hour Party People when I was a teenager and when it came to the Tony Wilson line, “This is Manchester, we do things differently here…” a collective roar went up around the cinema. There’s something inspiring about coming from a place where people feel that sense of pride and belonging – like we, as a city, know who we are and that we have something to say.

Where are your favourite places in Manchester?

For me, there’s something really special about raising my kids in the city I grew up in. I like taking them to the Roman fort in Castlefield and watching them run up and down in the moats playing their own versions of the games I used to play with my big brother – or taking them to Marie Louise Gardens in West Didsbury and seeing them climb in the same trees we did. I also love MOSI and the People’s History Museum and Fletcher Moss Gardens and the Whitworth Art Gallery. The Royal Exchange Theatre will always have a very special place in my heart. I worked there for 9 years, met my husband there and went into labour with our oldest child on the way home from a play there (Beautiful Thing by the brilliant Jonathan Harvey). All my favourite clothes come from Mockingbirds in Withington.

Can you tell us a bit about Chip Shop Chips?

It’s a love story, or two love stories, actually. After his father’s death, Eric, a 60 something drifter, has come home to reopen the family business. He wants to prove himself by transforming it into the kind of trendy fish and chip restaurant that serves halloumi as the veggie option. He has this big opening night planned but everything is thrown into disarray when his childhood sweetheart, Christine, arrives. It’s a play about first love and possibility and memory and nostalgia.

What do you order from the chip shop?

The play is quite scathing about battered halloumi but I have to admit I’m quite partial to it. Battered halloumi with chips, mushy peas and a can of dandelion and burdock.

Why should we go and see Chip Shop Chips?

Well, the central character – Eric – fancies himself as a bit of a showman and he is determined that everyone is going to have a good night out. So there’s a quiz, a bit of Northern Soul and some terrible fish puns. Alongside that, you get to eavesdrop on these two unfolding love stories which are both touching and romantic in their own ways. So you should come away with a smile on your face and a full heart. And you get great fish and chips.