This is the place: Monton has a colourful community vibe and café bar buzz

Monton is a thriving Salford suburb destined for great things. There’s a real buzz about the place, with indie cafés, tea rooms and bars popping up all over the shop.

With tongue firmly in cheek, Monton has not only been compared to the French Riviera – it’s affectionately known by locals as Monton Carlo – but has also recently been tipped to be ‘the new Didsbury’ and ‘the new Burton Road’. Move over M20. M30 is in the building.

Monton is proper hip. TravelSupermarket ranked it at number 19 in the 2017 edition of the annual Hip Hangout Guide to areas which are ‘trend-setting’ and boast many independent outlets.

The name Monton is of Saxon origin. Formerly called Mawinga after an Anglo-Saxon warrior who lived in a settlement in the area in 1214, it was changed to Mawnton (which sounds a bit posh said out loud) then Monton. Ton means settlement in Saxon.

Cafe and bar culture is thriving in Monton. A number of popular bars and restaurants have opened in the last few years, attracting new trade into the village from surrounding areas. If it wasn’t for the weather, you could be forgiven for thinking trendy Monton village is a typical Mediterranean strip of cafe bars.

More and more planning applications are inspiring the whole area to smarten up its appearance. Many bars have outdoor terraces decorated with pretty flowerbeds. And thanks to heat lamps and cosy blankets, the alfresco scene on the Costa Del Salford isn’t confined to summer.

Malt Dog is a small specialist craft beer bottle shop and tap house on Monton Road. It’s  the first craft beer bar in Monton and probably responsible for the growth of the continental-style night-time scene here.

“Monton Carlo is a phrase used by locals tongue-in-cheek,” says owner Donna Robinson. “We know we’re not posh and we’re proud of it.

“There’s a good mix of people, lots of talented artists and musicians who perform open mic in local bars. Dave Lurvin’s Jazz Band play every month just for the love of it. It really is something special.

“And on a summer’s evening when the patios are brimming with people chatting and the sun is beginning to set beyond the blossom trees facing Monton Road, it’s quite beautiful.”

What she loves about Monton are the people, their sense of fun and support for new businesses.

“When I opened, I was struggling to fit the beer in my tiny space so a local bloke named Steve offered to build me a tiered racking system. It was an iron frame and weighed a ton. They dragged it in on an extremely hot day and when I asked for the bill he said ‘it’s our gift to you for opening in our community’.

“That show of community spirit is very strong here. Visitors to Monton simply fall in love with the area and want move here. Craft beer was unheard of in Monton in 2013 but it didn’t stop people trying it. Montonions know how to have fun.”

Opposite Malt Dog you’ll find The Park. Formerly known as The Park Inn, it’s a Holts pub  which had a major refurbishment in 2016 and transformed from a late 90’s pub into a modern beer house. The refurb included a new raised heated terrace area perfect for alfresco drinking. And you can watch all the big matches on one of the big tellies.

Davardi’s, the first pizza shop in the north of England, recently branched out into Monton so Montonions can have a slice of the action – and of the pizza, too. The pizzeria offers a traditional takeaway service with a restaurant area upstairs serving delicious pizza and pasta dishes.

Vintage Ambiance is a quirky independent watering hole which opened in 2015 with a grown-up cocktail menu and home made eats and treats. The décor is plinky plonky, with a white wood waxed bar, cosy seating area, and original wall art. 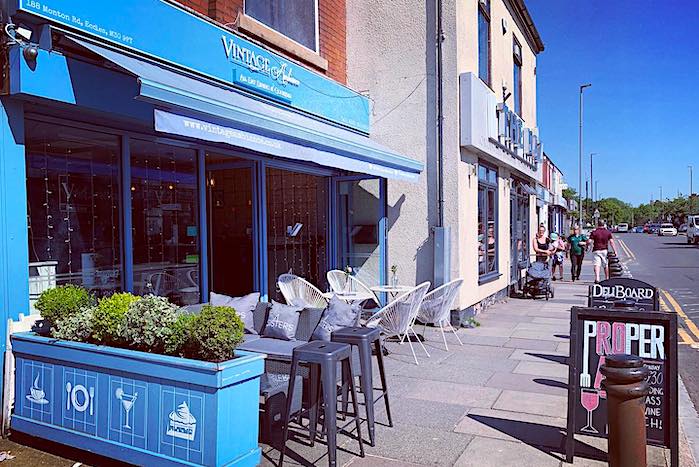 Open from 10am daily, they serve up a simple but delicious breakfast menu throughout the week but are renowned for their signature afternoon tea.

Chef proprietor Dan Borza says there’s a ‘huge community spirit’ and that the relationship between the independent shops, bars and eateries and local residents and regulars ‘goes way beyond a simple transaction.’

“I think we all feel so proud to be a part of it all that it brings with it a sense of responsibility to sustain it, cherish it and constantly improve it to help maintain this unique vibe of daily enjoyment and sense of belonging.”

A bit further up on the same side of the road, Leo’s is the classic neighbourhood Italian restaurant complete with red-and-white check tablecloths. The restaurant and pizzeria serves traditional Italian fare with a range of pizzas and pastas plus classic mains like Pollo Parmigiana and Vitella Milanese.

Enoteca is an Italian word roughly meaning wine refectory. There are enoteca bars all over Italy – and a little one in Monton village, too. Enoteca is a grown-up wine and cocktail bar serving carafes of prosecco and a variety of Italian wines imported directly from its vineyard.

Playfoots is a café business that transforms into a wine bar in the evenings, adding to the local night-time scene. It’s open until 11pm offering fine wine, craft style beers, ales and a wide range of spirits.

La Turka is a Turkish bistro which opened in 2015, around the same time as many other popular bars and restaurants, which has attracted custom from local Corrie and Hollyoaks celebs. Try the La Turka meatballs or, if it’s a pit stop on a tour of local drinking establishments, try the home made doner kebab. If you dine on a weekend you might be treated to some belly dancer entertainment.

Situated just off the Monton Green roundabout, The Blind Pig, formerly The Drop Inn, is a friendly modern eatery with a bit of live music. Together with Malt Dog, this is one of the best things to happen to Monton in recent times. Can’t go wrong with a burger and a beer in here, unless you’re a vegan – in which case have a nice salad and a nice day.

Opposite is Blacksticks, a smart restaurant with a modern European menu including tapas and small plates. The early bird menu offers a good selection of a la carte dishes at £13.50 for two courses or £16.50 for three. 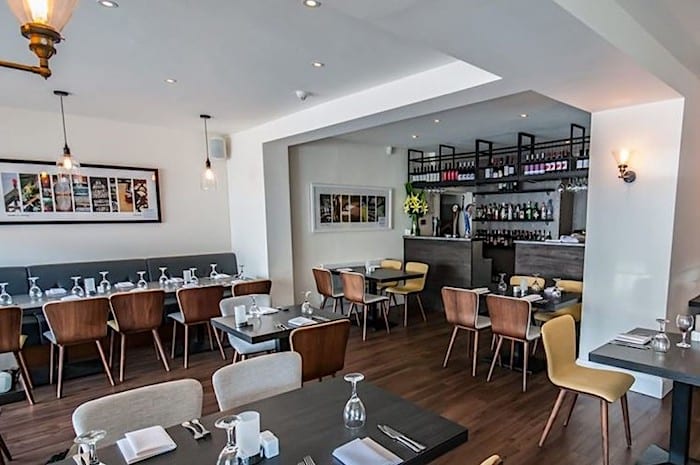 On the edge of Monton village beside the Bridgewater Canal, you’ll find the Waterside public house serving reasonably priced food and drink. Crompton’s at the Waterside has been in Monton for over ten years and has become popular for Sunday roasts.

Monton village is wedged between the M602 and the A580 East Lancs Road and is only a couple of miles away from MediaCity, intu Trafford Centre and Ellesmere Park.

Patricroft Station is on the Liverpool to Manchester line, the world’s first inter-city passenger railway and a major engineering achievement in 1830, and is located at the point where the railway crosses the world’s first commercial canal. It’s 13 minutes to Victoria, with around three trains an hour.

Monton is only a hop, skip and jump away from Eccles Metrolink Interchange from where you can travel across Greater Manchester.

Monton Village Community Association has maintained the shrubs, flowerbeds and greens since 1998 with financial support from local businesses. 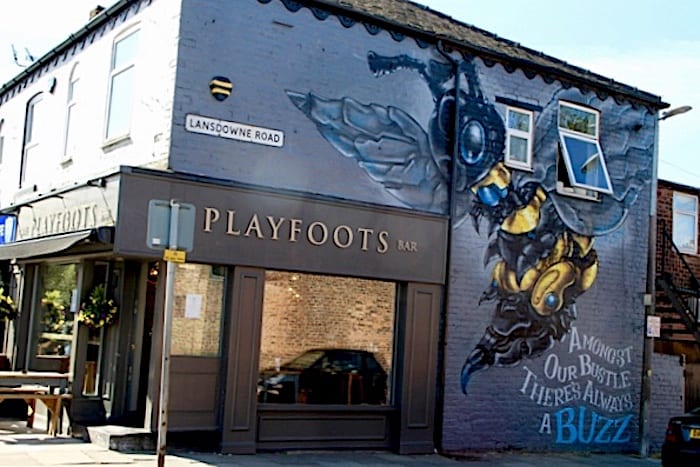 They are responsible for the giant bee nicknamed Monty by local residents which is painted on the side of Playfoots Cafe & Bar with the words ‘amongst our bustle there’s always a buzz’.

“We were very proud to be involved in the project,” said previous owner Beth Playfoot. “It’s very exciting that local business owners and communities can collaborate with artists and poets to create something really positive for everyone to enjoy.

“The bee symbolises the progressive, industrious and hard working attitude of the people of Monton and Salford.”

Monton Green Gardening Group meets every Sunday morning – weather permitting – and  welcomes new volunteers to help with litter picking, weeding, planting, pruning etc. Every year, just before winter, they put the beds to bed and need extra help for this. Last year, they won a Britain in Bloom in Your Neighbourhood award.

Monton Road has a post office, and an array of independent shops such as a florist, bookshop, jewellers, dog groomers, and a nail studio. The latest addition to the high street is Twig, a home, card and baby shop. Monton Village Community Association has launched a Monton loyalty card offering discounts in local shops. 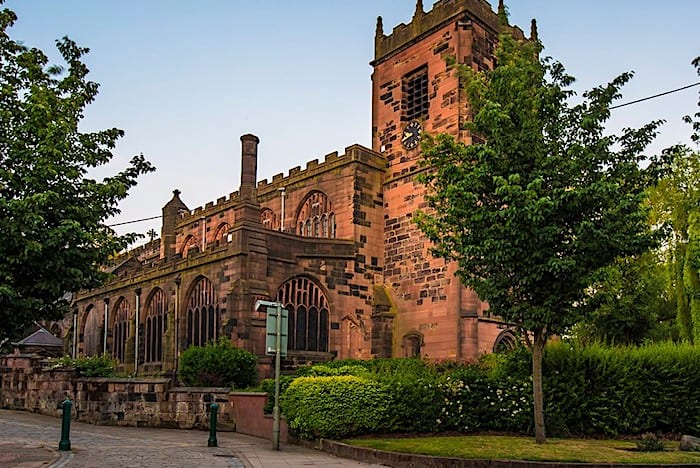 The picturesque Roe Green Loopline Heritage Trail is famed for its wildlife. This old railway line conversion is a circular walk that begins and ends in Monton village, returning along the towpath of the Bridgewater Canal. The walk is about two miles long and gives you a glimpse of a bygone era.

Between the canal and the Loopline you’ll find Duke’s Drive, a green oasis in the centre of Monton and the perfect place from which to explore the surrounding area and a lovely spot to stop off for a picnic.

Monton Sports Club opened in the early 1900s and boasts a clubhouse that doubles up as a function room, a full-size cricket pitch, squash courts, tennis courts and a roof terrace. Social membership is only £30.

House prices in Monton are above average for Salford and on a par with neighbouring Worsley. On average, a two-bedroom house in Monton will cost you around £250K, a three-bedroom will cost you circa £300K, and a 4-bed detached north of £500K. Monton village is considered to be a desirable area and people are prepared to pay a premium to live here.

Property in Monton is in demand. Houses are typically sold within a few weeks of going on the market and properties off Monton Road – the main road running through the centre of the village – are particularly sought after. The Monton Mile really is the place to be.

So now you see how Monton Carlo is putting a touch of class into the Costa Del Salford.