This is so addictive: step into the future at Manchester’s first Virtual Reality gaming hub

The region’s first VR gaming site opened in Salford in 2017, and now Manchester has joined the party with the arrival of Virtural Hideout at the Great Northern Warehouse. The team behind escape-room game company Breakout have taken over one of the old B.EAT Street units backing onto Deansgate and turned it into a VR paradise.

I’m not much of a gamer, so was surprised when the team invited me down to experience their new concept. That being said, I absolutely loved it. Be warned, it’s an addictive experience that lives up to its name – I could totally see myself hiding out from the stresses of life inside the VR world. It makes a better distraction than always going to the pub, right? 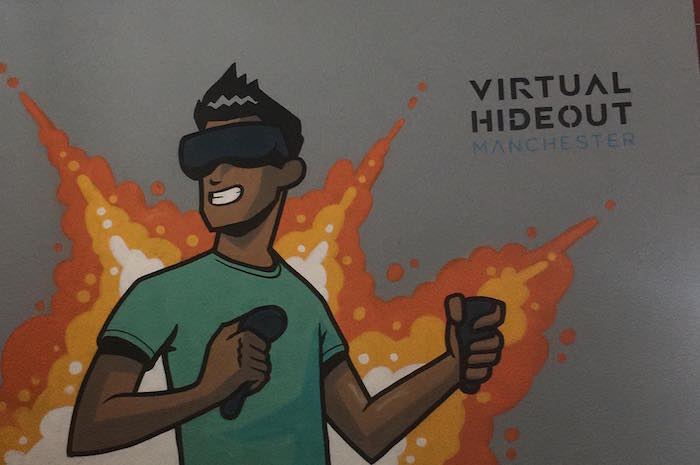 With over 100 games to work through, you could lose yourself here for days on end if you wished. Sadly, I only had an hour to play. Needing a companion who had some legitimate video games knowledge more current than The Simpson’s Road Rage circa 2001, I enlisted the help of my boyfriend.

On arrival, we were sat down to play a console game called Rocket League which is a mix of football and car driving. I wasn’t very good which I found frustrating, especially because H really was, but thankfully this part was over soon and the virtual reality games began.

We were taken downstairs into the VR room by our game instructor Adil. He explained that movement sensors have been set up around the perimeter which then map out your virtual reality within the confines of the space. This stops you running into walls or knocking over furniture: handy.

However, I still managed to punch our poor game instructor during a fighting game (in my defence, inside the VR I thought I was punching one of the baddies).

To get started, he asked whether I was afraid of heights. Full disclosure: I am very scared of heights. However, this being “not real”, I decided that I’d be completely comfortable trying a simulated VR heights experience.

Boy was I wrong. Once I was in the headset, I saw a lift and was instructed to get into it. So I did. The lift took me all the way up and when it opened there was a wooden plank leading out with an incredible, stomach-turning drop below.

I stepped out of the lift onto the plank and inched forwards, my heart racing and my knees trembling. Suddenly it all felt very real.

My next task: take one tiny step to the left. Coming from my instructor it sounded so simple, but looking down all I could see was a huge drop that gave me instant vertigo.

Not only could I not step to the left, when I announced this to the room (feeling very silly acknowledging the reality of the situation) I found it an even bigger struggle to make my way back into the lift to return to the ground. Turns out, sound logic doesn’t necessarily help you overcome the mind-boggling effects of VR.

Feeling a bit pride-hurt after my first attempt, but reassured and encouraged by Adil, I tried a game that he assured me was very popular. Basically, you have a couple of virtual sabres attached to your hands which you use to slice oncoming objects in time to a musical beat. It’s really fun and I massively got into it, as did my boyfriend.

We also played an archery game in which you could light your arrows on fire (there were about 10 different shooting options for the arrows) in a fight to defend your castle, and a hand-to-hand virtual combat game where you find yourself shooting and punching attackers. This is where the aforementioned punching of Adil took place – I’m so sorry! 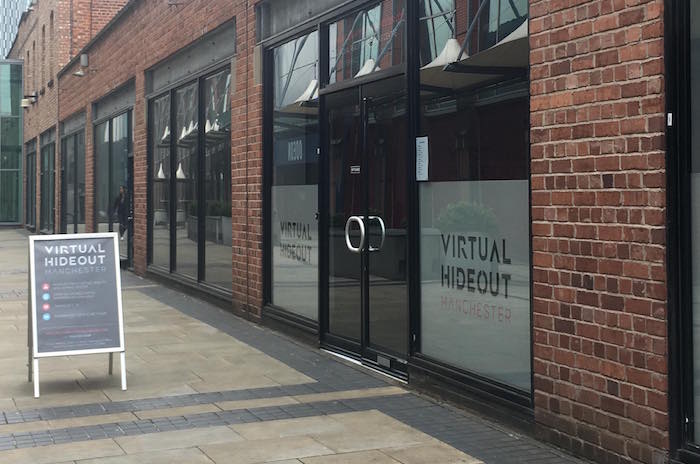 All too soon the hour was up, but we both left eager to tell our friends and go back again. It’s immersive and more-ish, and with such a big range of gaming experiences on offer it has been made accessible to a lot of different people.

Whether you’re wanting to play together in a team or alone, the option is there (up to teams of four) and you’ve got a practised guide who helps you find games that you’ll enjoy. What’s more, it’s only £10 a session – not too shabby when all’s said and done.

You can fInd Virtual Hideout at Unit I, J and K, Deansgate Mews, Great Northern, Manchester M3 4EN. To book head to their website or email hello@virtualhideoutmanchester.com.