‘There is no Planet B’: new climate change mural appears in the Northern Quarter

As Extinction Rebellion draw their four-day protest on Deansgate to a close, the finishing touches have been added to a colourful new mural in the Northern Quarter.

The message is clear, stating plainly ‘There is no Planet B’, with the ‘O’ in a forlorn-looking planet earth. Out of its mouth sticks a thermometer, signifying Earth’s rising temperatures and overall ill health.

Next to it, an anthropomorphized heart gives itself a hug and lettering above reads ‘be kind.’ 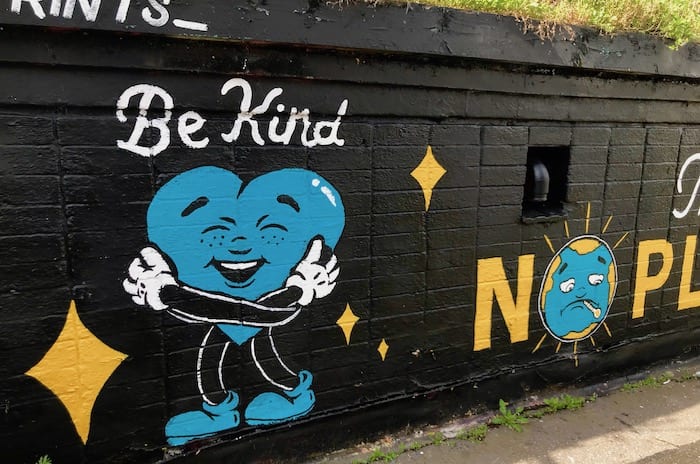 Flanking this core message is more type on either side. To the far left, the artist begs us to ‘draw from experience’ – illustrating his double entendre with a broken pencil.

And to the right, further type reads ‘you’ve been here before, you’ll be here again.’

Appearing on Stevenson Square as part of pioneering outdoor art project Out House, the piece has been created by local artist Harrison Edwards. 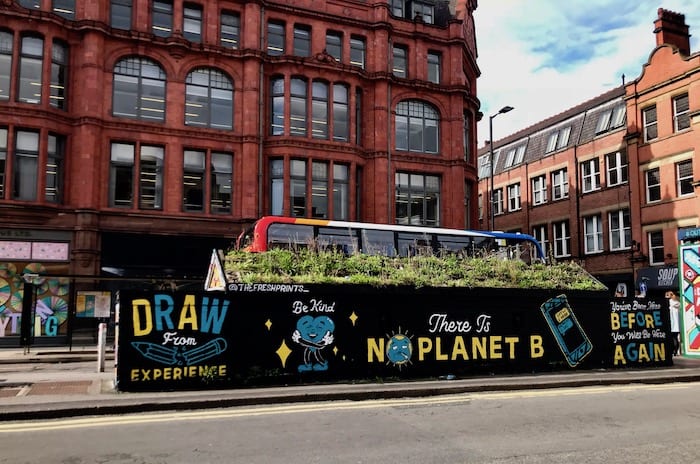 Created as an extension of his recent Vending Machine exhibition, currently on display around the corner at Idle Hands, by painting in a bright colour scheme on a black background it makes his message hard to ignore.

Commenting on the piece, he tells us: “The colour scheme is […] a continuation of the exhibition for things that there wasn’t enough space for or deserved a bigger stage, such as ‘No Planet B,’ which is maybe a message that more people should consider in their day-to-day lives. Not only to look after the planet more, but the people on it as well.

“‘You’ve been here before you will be here again’ was [intended as] a reminder for people that the good times come and the good times go but they’ll find their way back around again,” he continues.

“The same can be said of the bad times too, but you need that balance of both in life, I think. Plus, I spend a lot of time around Stevenson Square.” 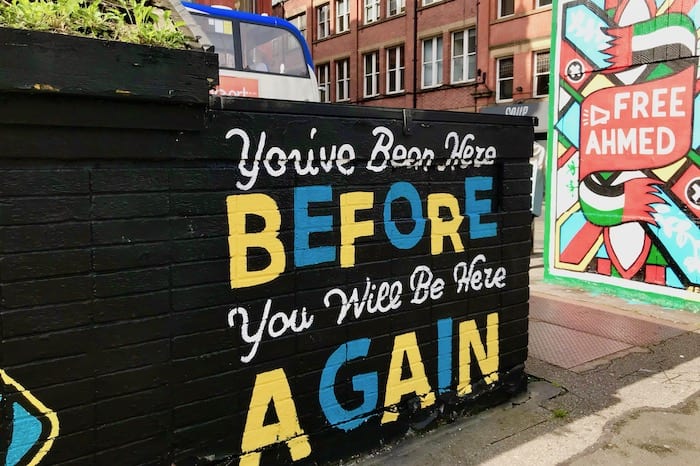 Created gradually over the last couple of weeks, the timing of its appearance is poignant.

The weekend has seen climate change protesters Extinction Rebellion take over Deansgate to highlight the need for change, with protests continuing today.

Around 50 young protesters staged an 11-minute ‘die-in’ at Manchester Arndale yesterday against the fashion industry’s lack of sustainability.

Chanting “What do we want? Climate justice. When do we want it? Now” the protest hoped to spread awareness on global microplastic pollution. 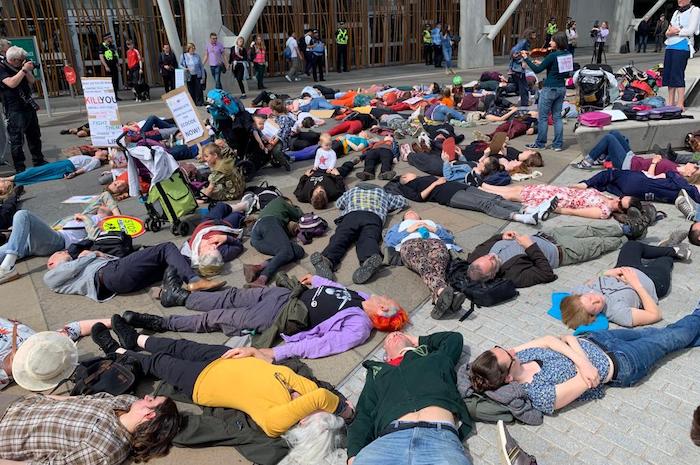 This morning, further protests have seen activists attach themselves to Barclays’ front doors on Piccadilly Place to protest the bank’s continued funding of the fossil fuel industry.

Others, including former Green Party leader Natalie Bennett, have marched to Manchester’s courts to stand in solidarity with anti-fracking protesters, appearing today to fight an injunction designed to quash legitimate protest.

The Extinction Rebellion takeover is due to come to a close at 5pm this evening, but our climate change emergency carries on.

For more of Harrison’s work, find him on Instagram at @thefreshprints_