When you think of fast food, it’s only natural to conjure up images of burgers, fried chicken and, particularly for northerners, pies and pasties. So when Italian restaurant owner Ivan came to the UK, he was surprised at the absence of something that he had always seen as the fast food par excellence – cheap, on-the-go pasta and pizza.

It was this that inspired him to set up The Pasta Project, which aspires to make quality, affordable Italian food a staple when it comes to working lunches.

Impressed with the pasta menu, customers began to enquire about whether they would be branching out into providing what another staple Italian food. Last night saw The Pasta Project launch their brand new pizza menu.  And boy did they deliver. 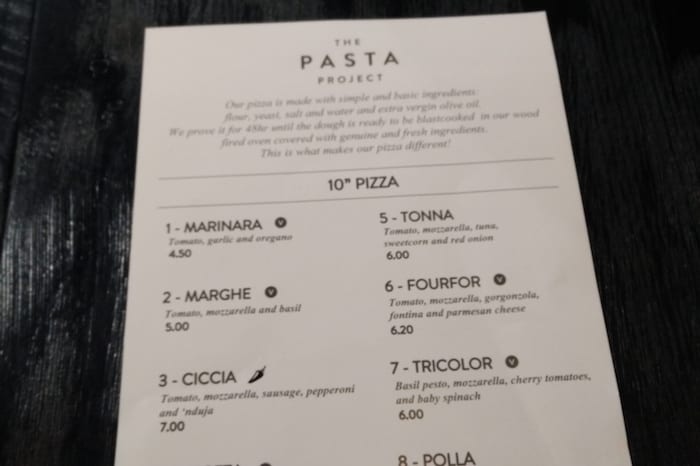 When thinking of where to open a take away with such bold ambitions, Harpurhey Shopping Centre may not be the first place that comes to mind. Facing out onto the car park, directly opposite a large KFC, The Pasta Project stands out like the proverbial sore thumb.

The décor is classy and minimalistic, in stark contrast to its rival across the car park.  The understated dark wood, chrome and glass interior allows the café to stand out amongst the sea of primary colours surrounding it. While intended mainly as a take away, the comfortable and ample seating area provides a relaxed environment for anyone with more time to spare.

The pizza and pasta menus, like the décor, are minimalistic, suggesting a confidence in the product that turned out to be well grounded. The dough is proven for 48-hours before entering the oven and cooked to create a Neapolitan pizza that provides more solidity than punters will be used to at the ever popular Rudy’s. 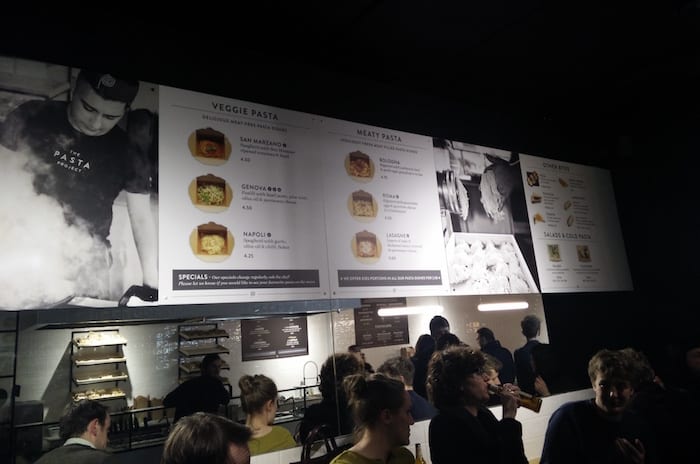 The chef, plucked from popular Northern Quarter restaurant Ply, manages to create a base that is at once crispy and delicate, with a subtle sourness that compliments the natural sweetness of the locally sourced San Marzano tomatoes.

The Tricolor, a pesto and spinach topped delight, made for a simple, light option. The pesto was light, relying on the freshness of the basil to compliment the delicate fresh San Marzano tomatoes.  The Fourfor, a four-cheese feast, was a bold contrast to the Tricolor.  The four cheeses, mozzarella, gorgonzola, fontina and parmesan, blended together to create a mixture that was as heartening as it was delicious.

On the meaty side of things, the Polla, topped with chicken, mixed peppers and mushrooms, again relied on subtleties and quality ingredients to really shine. The peppers were fresh and juicy, while the mushrooms provided plenty of earthy flavour to counterbalance the sweetness of the peppers. 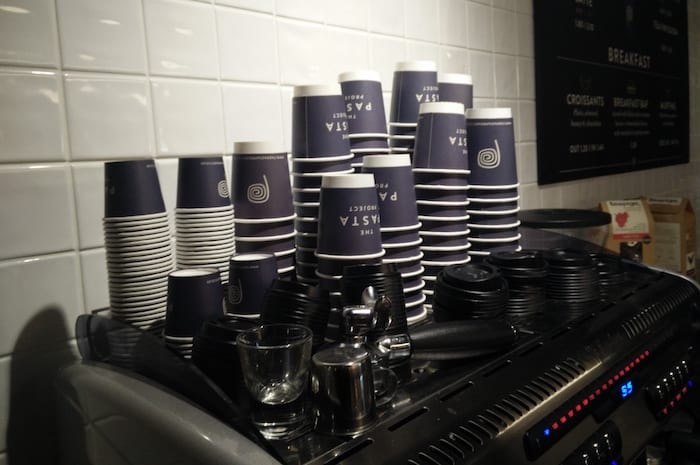 In direct contrast, the Ciccia, a sausage, pepperoni and ‘nduja (spreadable salami) topped pizza, provided a much more visceral experience, with the thick cut, meaty sausage combining with the flavoursome ‘nduja to produce a pizza that is sure to be a hit with anyone requiring a meat-fix.

Despite being full to the brim with pizza, the passion with which owner Ivan spoke of his pasta made us want to try some. The Napoli, simple spaghetti with garlic, oil and chilli flakes, was cooked to perfection. The pasta was surprisingly al dente, speaking to The Pasta Project’s ambitions of reinventing the lunchtime take away scene. Despite being made from relatively few ingredients, the quality of the flavours again allowed for a pasta that was truly remarkable.

While Harpurhey might seem like a strange location for such an ambitious project, the owner has his sights on something much bigger. The current site provides a giant kitchen, already producing up to 200 kilograms of fresh pasta everyday. “The kitchen can serve as a base for up to four or five smaller central venues,” says Ivan, and he’s currently on the hunt for a second outpost in Spinningfields.

However, it would be a huge mistake to wait for that. The Pasta Project is already an ambitious, daring eatery. It could well be the suburbs’ best kept secret.