The story of Manchester in 101 objects: #9 the rise of Protestantism 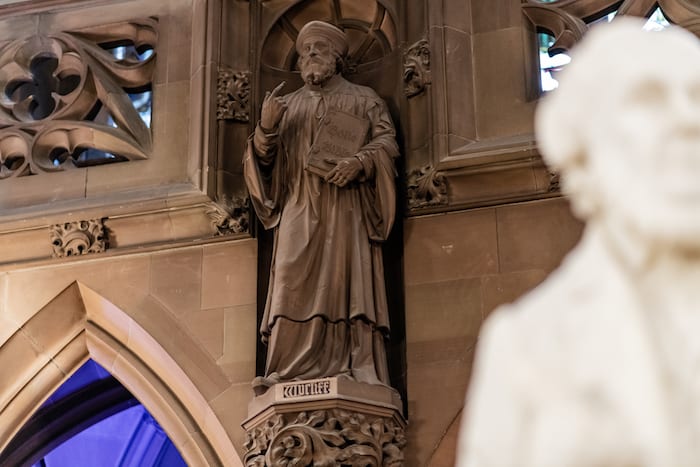 Manchester’s strong independent spirit, honed down the centuries, manifests itself in the city’s traditional religion: Protestantism.

A quick glance through a list of the great figures who shaped Manchester’s rise to prominence in the 19th century reveals Quakers, Unitarians, Congregationalists, Lutherans, Baptists, Swedenborgians, even CoE, but few Catholics.

John Dalton was a Quaker, as was John Bright. The Gaskells were Unitarians, the Rylands Congregationalists, Friedrich Engels was a Lutheran, Richard Pankhurst a Baptist, Richard Cobden Anglican. To them, Protestantism was tied up with liberty. As William of Orange remarked in 1689 when he took the throne from the Catholic James II: “The Protestant Religion and Liberties of England I will Maintain”.

Protestant Manchester? Look at the statues dotted around the city: Protestant heroes. Outside the Town Hall stands Elizabeth Tudor (always Tudor please, never the First). Why is she there? In decorating the Town Hall, which opened in 1877, the city leaders chose to honour figures who had contributed to their view of the city’s history. Queen Elizabeth sent her people to Manchester in 1578 to close down the Catholic college of priests, the College of the Blessed Virgin Mary, and reopen it as a Protestant college, Christ’s College Manchester. It is now Chetham’s.

Inside the Town Hall, many of the Ford Madox Brown murals mock Catholics and their re-admittance into society earlier in the century. This is at its most emphatic in Mural No. 5, The Trial of Wyclif, which links with the statue of John Wyclif (or Wycliffe) in the John Rylands Library.

Wycliffe was the first major English religious reformer, “the Morning Star of the Reformation”. The painting commemorates the 500th anniversary of Wycliffe’s success at avoiding conviction for blasphemy, heresy and treason after he had ridiculed Pope Gregory VII in 1377. Five years later the authorities banned all Wycliffe’s writings. He died in 1384 but his death did not bring an end to the drama in which he was involved.

In December 1427, the Pope ordered that Wycliffe’s body be “dug up and cast out of consecrated ground”. The corpse was exhumed from its grave in Leicestershire and burned, the ashes cast into the nearby River Swift. Supporters later mused that as the Swift flows into the Avon, the Avon into the Severn, the Severn into the Bristol Channel, and the Bristol Channel into the Atlantic, Wycliffe was spreading throughout the whole world.

In the John Rylands Library, Wycliffe’s statue stands at the river end of the first floor Reading Room alongside William Tyndale, an even more influential reformer.

In the 1520s, Tyndale was the first person to publish the Bible in English against the diktats of the Catholic Church. Ironically, the Church was Tyndale’s best customer as they and the King’s men bought up every available copy just so they could burn them. Tyndale used the money to print even more.

Tyndale was hunted down by Papist elements who opposed the Reformation and imprisoned in Vilvoorde Castle near Brussels. On 6 October 1536, he was strangled and burned at the stake in the castle courtyard. His dying words were: “Oh Lord, open the eyes of the King of England!”

At the other end of the Rylands Reading Room stand the two main European Protestants – Martin Luther (1483-1546), who began the move to reform the Catholic Church in 1517, and his French/Swiss counterpart, John Calvin (1509-64).

It was Calvin who explained how God had made man to work. How it was man’s duty to God through salvation by Jesus Christ. And that no one had a right not to work if able to do so. Just the sort of thinking that powered the Industrial Revolution in which Manchester would lead the way.