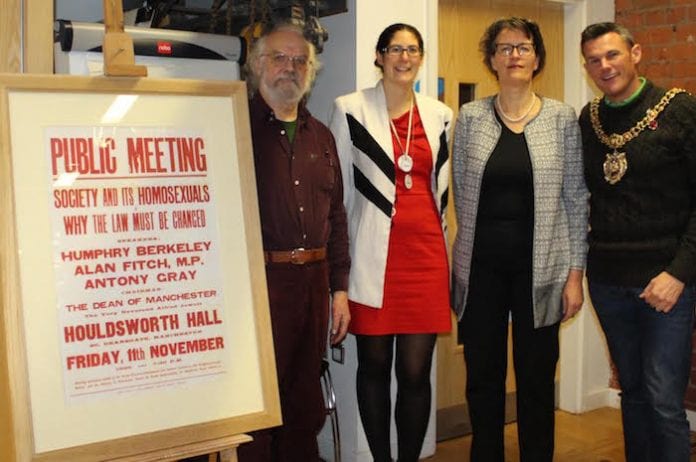 A public meeting of the North West Homosexual Law Reform Committee which took place in Manchester on November 11 1966 was one of the main catalysts for reform of the law on homosexuality.

It was therefore fitting that on the 50th anniversary of that meeting the People’s History Museum presented its plans for its 2017 programme which include Never Going Underground, an exhibition curated by members of the LGBT+ community.

“It felt incredibly poignant to mark the 50th anniversary of such a significant event in the history of LGBT+ rights, and one which took place right here in Manchester, making it the perfect way to preview our programme for 2017,” said Catherine O’Donnell from the  Museum.

The event was attended by Carl Austin-Behan, the first openly Lord Mayor of Manchester, who has worked to engage with and connect the city’s diverse communities.

“It’s a story that needs to be told,” he said.  “2017 is not only the time to do this because of the 50th anniversary but because, as we look forward, we also have to remember that the path to equality is an ongoing journey.

“I was forced to leave the RAF for being gay, with the armed forces ban only being lifted in 2000, something that today’s young people find hard to comprehend.  And as Manchester has been such a central part of the LGBT+ movement, it’s fantastic to see all of this taking place in the city.”

Manchester has played a big part in furthering the fight for equality. It is home to The New Union hotel, one of the oldest meeting places in the north west for the LGBT community, Canal Street and The Village, which have created a community in themselves.

In the 1970s the radical emporium Grassroots on Newton Street sold gay literature, whilst Sackville Gardens is home to The Beacon of Hope which commemorates lives lost to HIV and AIDS and the Alan Turing memorial.

The exhibition will open on 25 February 2017 – 50 years since the partial de-criminalisation of homosexual acts in England and Wales under the 1967 Sexual Offences Act – and will be on show until 3 September 2017.