The original daft punk: whatever happened to Jilted John?

Anybody who was anybody on the Manchester music scene of the late 70s and 80s claims to have been at the Sex Pistols gig at the Lesser Free Trade Hall on 4th June 1976.

One man who claims he wasn’t there is Graham Fellows. He was probably at home in Sheffield because he had to get up for school the following morning.

But Graham went on to write and perform one of the seminal records of the post-punk era – one which is fondly remembered to this day.

The song, Jilted John, is a teenager’s lament that his girlfriend Julie has left him for a boy called Gordon because he’s better looking and cooler than him. And it’s very funny.

It featured the immortal line, “I was so upset that I cried all the way to the chip shop” and the refrain “Gordon is a moron” which was sung in playgrounds up and down the country in the summer of 1978 – and possibly long afterwards.

Graham claims he wrote the song during his lunch break at Manchester Polytechnic, where he had gone to study drama.

The record was produced by the legendary Martin Hannett who, says Graham, ‘sprinkled fairy dust on it’.

It was picked up by John Peel, which gave it credibility. But it was when it was played by Simon Bates and went mainstream that Graham knew he had a hit on his hands.

The record clearly struck a chord – two fewer than the number of chords in the song – and sold so many copies that Rabid couldn’t cope with the demand and licensed it to EMI.

Graham went on Top of the Pops as Jilted John three times and had to sing a live vocal. On one occasion, he was so nervous he forgot the words – quite an achievement as there aren’t that many in the song.

The nerves are perhaps understandable. In the late seventies, everybody watched Top of the Pops – there were only three TV channels and Top of the Pops was one of the only music programmes on TV.  It regularly drew audiences of around 20m – about twice as many as Britain’s Got Talent and Corrie get today.

But the acts on Top of the Pops were a bit hit and miss because the programme only featured chart music. That meant Brotherhood of Man, Showaddywaddy and Boney M. It was as if punk had never happened.

So when someone a bit different came along like Ian Dury, The Stranglers, or Kate Bush, it was like a breath of fresh air.

Jilted John by Jilted John was one of the most memorable performances of 1978.

Kid Jensen, the presenter, introduced it as ‘one of the most bizarre singles of the decade’. Despite this – or perhaps because of it – it was a huge hit, reaching number four in the charts.

It became one of the best-selling singles of 1978, shifting half a million copies – more than the Village People’s YMCA, Stayin Alive by the Bee Gees, and ELO’s Mr Blue Sky.

An album, True Love Stories, followed, also produced by Martin Hannett, and was really rather good and had a wonderful true love stories comic strip cover. But it wasn’t a success.

And that was that for Jilted John. 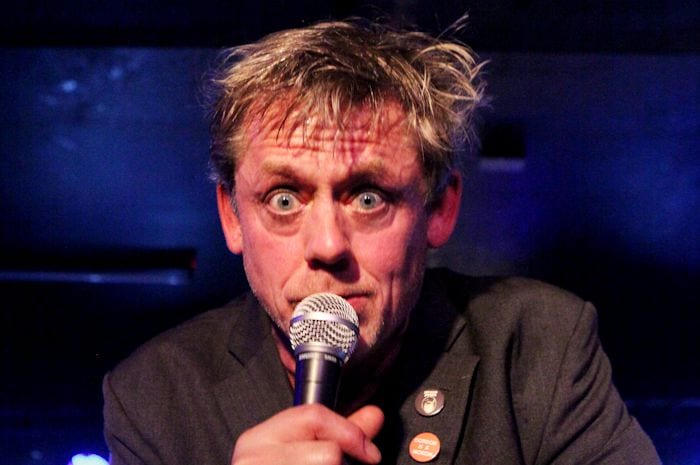 Graham went back to Manchester Poly, completed his studies and became an actor. He moved to London in 1987 and went on to create John Shuttleworth and other quirky northern characters.

In December 2014, Jilted John won the One Hit Wonder World Cup on the Steve Lamacq Show on BBC Radio 6 Music, voted for by members of the public.

Now he’s back, forty years older, with the 40th anniversary Jilted John tour, together with John Otway, another post-punk legend. The last night of the tour is at The Dancehouse because, says Graham, the song happened because of Manchester and people like Bernard Kelly, the friend who played Gordon the Moron.

He’s hoping Bernard will turn up and join him on stage for Jilted John. What a wonderful reunion that would be.

Jilted John is at The Dancehouse on Saturday October 20th 2018