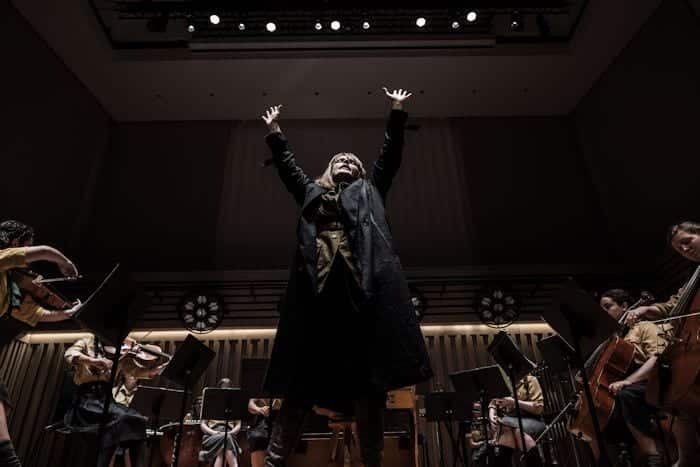 MIF events are often a mixed bag. Works get commissioned based on their ideas and the artistes involved. It is only when an audience arrives that you can assess whether the production or idea works and its real impact.

Rather than being a biographical piece, The Nico Project invites the audience to enter the mind of Nico. This is fitting as she is difficult to categorise. She was an actor, a model and a muse for whom Leonard Cohen and Bob Dylan wrote songs. Much of the appeal of this piece is the fact that she was the frontwoman of The Velvet Underground.

Maxine Peake, who plays this mysterious figure we think we know, has collaborated with director Sarah Frankcom, composer Ann Clyne and writer EV Crowe to create a highly original and often uncomfortable piece of theatre.

Alone on stage and vulnerable, Peake represents Nico as fragile, yet strong in her desire to tell her story. Disjointed memories and muddled thoughts are covered in a purple haze of fog. You find yourself concentrating on every line, trying to make sense of it.

Once the music begins, students from the Northern College of Music bring a real sense of magic to an already beguiling piece of theatre. Ellen Beth Abdi and Phoebe May Maddison’s vocals are haunting when these hugely talented musicians are required to act and let their hair down.

Maxine Peake is incredible, talking to herself out loud in a monologue, never coming up for air. Once the music begins, she shows another side to the audience, and is truly commanding, like a conductor.

Helen Atkinson’s sound design is crystal clear, and with buzzing sound representing the malaise that is Nico’s mind, your concentration never wavers. Anna Clyne’s music is incredibly powerful and the young orchestra members play with feeling and passion

Imogen Knight’s movement allows Peake to express so much without words. I loved Frankcom’s decision to let silence play its part in such a packed, dialogue driven hour.

You enter the beautiful Stoller Hall expecting to find out more about Nico and leave knowing even less. But there is something completely mesmerising happening here. It’s almost as if you stayed in Nico’s head for 60 minutes and witnessed the beauty, splendour, horror, discomfort and alienation all at once.

The Nico Project will not appeal to everyone. Some may find it too uncomfortable and difficult to follow, as it is neither linear nor biographical. For me, it is a piece of theatre that will live on in my mind long after MIF has finished. It is highly original, fearless in its approach, and offers no easy answers or compromises.

The Nico Project is at The Stoller Hall until 21st July.