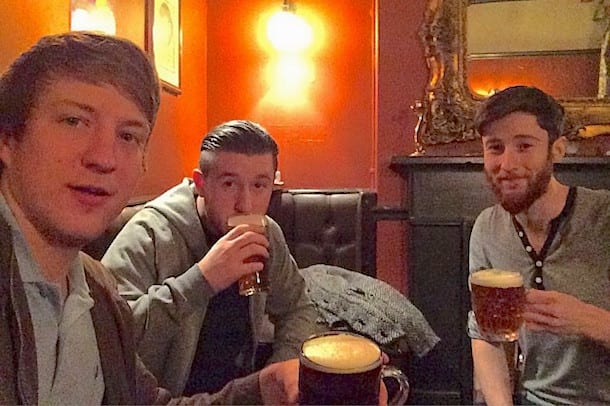 Fed up of the X Factor? The Music Factor is a documentary film which follows a young Manchester band, The Mantells, and their 17-week experiment to go from a band of mates to a group of greats. Aiming for a place in the charts over this time, using only their own money and social media, The Mantells have certainly set themselves a challenge, writes Emily Oldfield.

The Music Factor, directed by Chris Ridgway, is a film which explores our relationship with modern music and the struggle artists face to make it big – so much more than just a Saturday night TV slot.

“if you’re
looking for a
real perspective
on the modern
music scene,
The Music Factor
is one to watch.”

The documentary is quirky as well as questioning. It opens with a series of statements from the director, including ‘should a man in a suit tell us what to listen to?’ and whether we only listen to music now ‘to form opinion on it?’

The Music Factor takes us on a tour of modern pop culture, following not only the story of The Mantells, but also insight from a number of bands who’ve had to fight it out in the real world – including The Maccabees and Manchester’s Blossoms. Filmed by Mike Staniforth, the documentary darts between interviews and action with a wonderful energy. Snippets of advice from Mr Peeps, the famed promoter of Manchester music, drive the narrative forward, in a way which highlights the constant pressure to perform.

Rather than the orchestrated events of The X Factor, The Music Factor captures the strains, gains and growing pains home-grown bands face in trying to chart. Meet The Mantells, three lads living in Manchester – Tom Barrow on vocals and guitar, Dale Moran on bass and Lewis Moran on drums. One of the first challenges the band faces is self-promotion – on top of their daily demands of studying and full-time work! As Mr Peeps pipes in, one of the most important things a home-grown band needs to do is gig. Sounds great on the surface, but this down-to-earth documentary highlights how tough it can be. In an interview snippet, Nalle Colt of Vintage Trouble reflects that some bands have to face empty venues and the prospect of ‘not making a penny for a year.’

It seems that in reality, the passion needs to lie in making music, not making money. The Mantells are certainly passionate, and have the potential to be popular too – with their confident indie-sound, unapologetic Manchester accent and self-styled songs and lyrics. But do they have what it takes to make it big? The resources available to bands have certainly changed over time, and there is no point sneering at social media sites and Soundcloud. The boys, it seems, have to push the buttons not only of audiences, but the Internet- a bigger beast to tame than any judging panel.

Being online and on the public radar seem to feed into each other. You may remember the Arctic Monkeys’ early attempts to get themselves noticed – offering their first selection of tracks for free online. Getting into the limelight involves sacrifices, it seems, and even The Mantells’ first gig at The Roadhouse, Manchester, involves tiredness, but also a terrific opportunity.

It would have been good, I think, to include a little more material of the band in action, playing their music , but the accumulation of different perspectives in the film appears deliberate – highlighting that real music is so much more than just performing. Bye bye, X Factor. Here is an industry where home-grown talent has to work hard. Writing, recording, gigging, growing.

Another challenge is recording a single, with all the other related things to think about – finding a place to play, getting the right equipment and keeping up practice. The boys are lucky to secure Manchester’s BluePrint Studios, an impressive effort considering that it is all from their own money and the likes of Elbow and Snoop Dogg have recorded there. Is this an accurate reflection of what most home-grown Manchester bands would manage to get? But then again, so much in the industry is down to luck and being opportunistic.. Plus this isn’t the era of Factory Records and factory jobs. This is the millennial age – an age where young people can use money and technology increasingly to their advantage.

Keeping progressive and positive is the key, as well as the mood of much of the film. We watch the group struggle in areas the typical music listener may never have even thought of, such as keeping up with a ‘click track’ when trying to record a single. A click track, also known as a metronome, provides a rhythm to follow, ensuring that all the song’s components are the same speed and tempo. This creates a track more suitable for radio release, something The Mantells have to consider in their publicity drive for the single. Again, more insight into the music itself would be welcome, but this is a film focusing on process, rather than performance – The X Factor turned on its head.

Their single Men in Suits is a sneaky satire on the corporate culture driving the pop mainstream. TheMantells give their own twist to proceedings, including attempts to peddle their demo single to the BBC along with selection boxes and mince pies in the festive season. It’s a far-cry from ‘Christmas Number One’ but it’s certainly full of Mancunian cheeky charm. This is a film which is as funny as it is thoughtful.

So if you’re looking for a real perspective on the modern music scene, The Music Factor is one to watch.

You can watch the film for free on Clowdy: clowdy.com/MikeStaniforthFilm/cxy850/the-music-factor-full-film and keep up to date with The Mantells on their Facebook facebook.com/TheMantells