The return of This is England ’90 to our screens has revived a sense of longing for what may be seen by some Mancunians as the good old days.

‘follow in the footsteps of musical greats who shaped not just music, but a movement.’

The TV series focuses on the city as Milky, Woody, Lol and the rest of the Shane Meadows gang grow up in the decade which saw the resignation of Margaret Thatcher, falling house prices and one of the biggest damp squibs of all time – New Year’s Eve 2000. What Manchester rolled out in response was record after record, a cultural movement, the Madchester scene.

This is Manchester ’90 – the year after Happy Mondays performed on Tony Wilson’s Granada TV show, New Order released World Cup song World in Motion, and The Stone Roses performed their legendary Spike Island gigin front of 27,000 people. People were in love with Manchester. And don’t we all just want to revisit it?

The love for the late 80’s and 90’s Manchester cultural scene – both what inspired it and what came after it – lives on and you can still see the places where it happened. Walking through the city, you can easily follow in the footsteps of musical greats who shaped not just music, but a movement. And you can feel it at its most authentic by visiting the sites which got the ball rolling.

Most people know where the Hacienda, the hub of the music scene, once stood (opened in 1982, now a block of apartments on Whitworth Street). But there are a surprising number of places which played a central role in the era or at least influenced it, which are less well known under-visited.

So why not take the ultimate Manchester music tour and see the truth in Noel Gallagher’s statement: “The thing about Manchester is…it all comes from here.”

Here are some places you may recognise, some you may not, but all with hidden musical histories just waiting to be discovered.

Dry Bar was owned by ‘Mr Manchester’ Tony Wilson and opened by Factory Records and New Order in 1989. This was also the year of their album ‘Technique’, a legendary blend of their electronic beats with acid-house influences – a sound Dry Bar brought to the people in bucket loads. Designed by Hacienda architect Ben Kelly, Dry boasts a Factory catalogue number, FAC 201 and is therefore often referred to as Dry 201. It brought not only the best sounds but bar culture to what became the Northern Quarter. It was a popular place for music icons such as The Happy Mondays, The Inspiral Carpets and Oasis, as portrayed in the film 24 Party People. It’s worth a visit for the history and a great drink though you might be limited in terms of the famous faces you can see there. Liam Gallagher and Shaun Ryder have been barred for years. 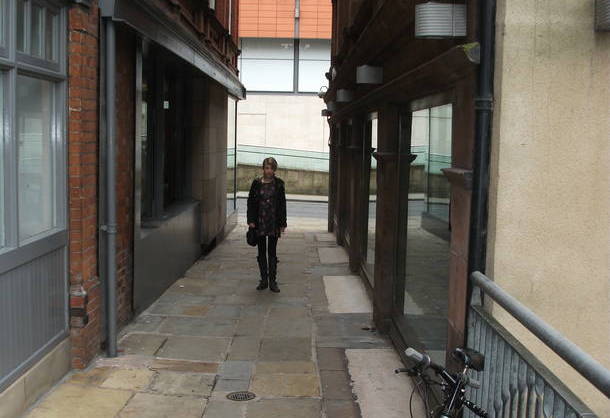 Hanging Ditch is a narrow alleyway not far from Exchange Square. After a brew at Proper Tea nearby, why not walk through the alley where Ian Curtis and the rest of Joy Division were famously photographed by Kevin Cummins? The photograph shows the grittiness of Manchester, the biting cold of winter and a dark, gothic mood which influenced a lot of the early Manchester music scene. The cathedral and gardens where Joy Division had a series of photographs taken are nearby. The cathedral is not only beautiful but has hosted performances by a number of bands including Elbow and The Fall.

This is the place where the Manchester music scene was promoted to a nationwide audience. “So It Goes,”Tony Wilson’s arts and entertainment programme, took the 1970’s by storm, showcasing bands like The Sex Pistols, Buzzcocks, and The Jam. Opened in 1962, the studios have played a part in an even wider musical legacy as it was the venue where The Beatles gave their first ever television performance in the same year. The studios closed in 2013 when TV production moved to Media City, but they are alive and well as a venue for live concerts, art and craft fairs and other events. And you can still take a tour of the world famous Coronation Street set.

It was in this dark, closed-in building that Joy Division recorded several sessions with Martin Hannett. Not far from China Town and down what feels like an assuming back alley, it is easy to see how an area like this contributed to Joy Division’s raw, aggrieved sound. Hannett helped to shape the band’s influential drumming, which combines heavy bass sounds with synthesisers – taking shape in this venue. The band also made a first attempt to record the ‘Transmission’ single here in 1979.

An infamous nightclub not far from The Palace Theatre which proudly occupied part of this high-rise grade II listed building and is now a Tesco Express. Rafters became a hotbed of musical activity pushing forward the punk rock scene of the late 1970’s. Influential bands which performed there include Joy Division, Buzzcocks, the brilliantly named Throbbing Gristle and Happy Mondays. Rob Gretton, who went on to manage Joy Division, worked as a DJ at Rafters and watched the band perform there in their early days. The club was renamed Jilly’s in 1983, and then MusicBox in 1992, but was clearly an influential place. Although the venue has now closed, you can still listen to its musical legacy – Depeche Mode recorded the album ‘A Second Now in Manchester’ here in 1981.

Try something truly alternative – visit a venue which no longer exists! The atmospheric-sounding building was located in the university area and was once home to a music school. It also became a kind of home to Joy Division in their early days as Warsaw and they played regularly here throughout 1977. Other bands to embrace the stage (or at least the small space at the front of the student crush) included The Fall and The Distractions. A shame then that this venue doesn’t exist anymore – not even Devas Street, the street where it once stood. The site itself is about 100 yards to the left of Manchester Academy 1. A barrier to a car park? Yes. Undignified. Industrial. Urban. That’s where The Squat used to be.

The Church of The Holy Name of Jesus

Close to the main university, this impressive building was built around 1869 and designed by Joseph Hansom. It is a prominent Catholic place of worship and is immortalised in The Smiths’ ‘Vicar in a Tutu’ which opens ‘I was minding my business/ Lifting some lead/ Off the roof of the Holy Name church’ – which would certainly be a task, as the building is enormous. It has played a major role in the lives of the Gallagher brothers. Liam and Noel’s parents were married there and it features in Oasis’ ‘The Masterplan’ video.

A modern, thin, slightly eerie-looking bridge close to Princess Road. The bridge is notoriously hard to find on Google Maps. (For some reason, the Hulme Arch Bridge nearby, isn’t.) Famous Joy Division photographs feature the band standing both under the bridge and on it – stony-faced and clutching themselves in the cold, apparently waiting for the photographer Kevin Cummins, rather than knowing he was there. It is located close to the site of TJ Davidson’s Rehearsal Studios, now no more, but once a place where a number of Manchester bands practised. A short walk away is Royce Road, where The Russell Club used to stand, the venue which hosted Tony Wilson’s infamous “The Factory” Night.