The making of modern Manchester – a tale of industry, science and creativity 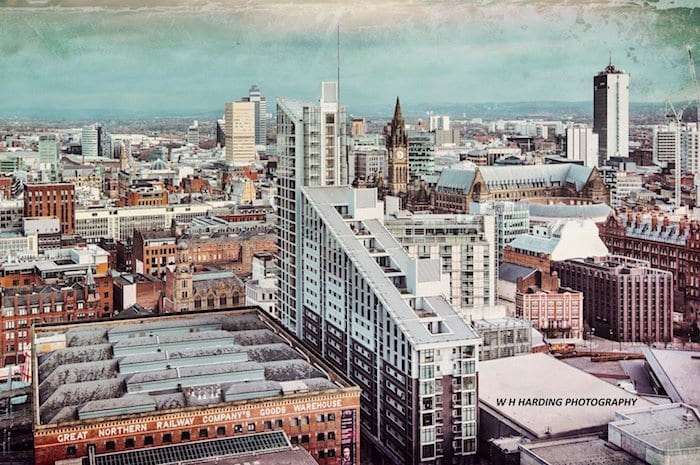 When people talk about the making of Manchester, the word ‘factory’ often crops up – whether the one associated with the Industrial Revolution or the Factory Records era of creative flair.

Manchester: Making the Modern City is a book which looks beyond the obvious, and considers the relationship between industry and creative culture in the long-term, with each chapter written by a different expert exploring the city’s capacity to refashion its identity.

The front cover of this impressive book– a photograph of the neo-gothic Town Hall with the sleek glass of Beetham Tower in the background – shows how past and present sit alongside each other and captures its approach.

The opening chapter by Geoff Timmins covers the pre-industrial period but pays only brief attention to Manchester’s Roman and medieval past, suggesting that the intention is to consider the city in the modern era specifically. It is a rich opening chapter and includes graphs denoting population size and trends, coloured copies of paintings, even eyewitness accounts – including a perspective on how fashionable King Street was becoming as far back as the eighteenth century!

Following this is Terry Wyke’s chapter, Rise and Decline of Cottonpolis, which provides a refreshing assessment of the role of cotton in Manchester’s growth. Although it opens with a quote by Eric Hobsbawm – ‘whoever says Industrial Revolution says cotton’ – we see many more sides to the city’s industry, from the making of waterproofs (thanks to the chemist Charles Macintosh) to the restyling of the Royal Exchange as a shopping centre.

The city endured various hardships which changed its trading patterns, and though the coverage of The Manchester Blitz seems a little brief,  it is part of Wyke’s ambitious exploration of whether the city maintained its status as one of the ‘messianic cities of human history’. The use of text boxes allows the authors to show alternate perspectives, including an interesting consideration of ‘Ugly Manchester’ and the view of  Marcus Cunliffe that ‘too many polite things have been said about it and believed.’

Politeness is pushed back, but this book still manages to focus on Manchester’s obvious power to make an impression. Particularly strong is Science, Technology and Medicine, James Sumner’s chapter on the uniqueness of the city’s scientific history, which points out the places which have played a part in this part of the story, including the old Mechanics Institute on Princess Street, Owens College and The Municipal School of Technology.

Science and technology should make us look up and appreciate the city, is what this chapter seems to say. Some amazing individuals who studied here are not always given the recognition they deserve. People such as educationalist John Henry Reynolds and Catherine Chisholm – one of the first women to train as a doctor at The University of Manchester – and Beatrice Shilling, who trained as an electrical engineer in the 1930s and is pictured sitting on a motorcycle.

This book gives welcome attention to the city’s hidden histories. There’s even a photograph of the unwrapping of an Egyptian mummy. Although Michael E. Rose’s chapter, The Voices of the People, opens with the oft-used historic perspective of the 1819 Peterloo Massacre, he quickly explores other perspectives with separate sections on the middle class, women, old and new politics, gay voices and more. We see a city of contrasts, what Rose calls ‘many expressions of argument and protest,’’ a place which used slave labour yet campaigned against it overseas.

Giving the reader multiple perspectives allows for a greater understanding of how the city is historicized and people are represented. Mervyn Busteed’s chapter Cosmopolitan City gives insightful coverage of the diverse communities emerging in Manchester, whilst Dave Russell’s section on Culture, Media and Sport shows there is so much more to creative Manchester than just the music.

Manchester is made by the people seems to be the message. The chapter ‘From Town to Metropolis’ by Alan Kidd which considers how surrounding areas and communities have shaped the city is worthy of a book in itself. We then see how Manchester has had to reshape itself from the centre, too. A dramatic photograph of the rubble left by the 1996 IRA bomb leads us into the final chapter, The Resurgent Entrepreneurial City by Brian Robson.

There is an optimistic feel to the book, celebrating Manchester as a place which has fought hardships to emerge as a modern city. Some beautiful colour photographs, maps, copies of artefacts, and extensive bibliographies for each section add to the enjoyment.