You may struggle trying to find the entrance to a new Prestwich cafe bar which opened its doors last month with a staggered soft-opening period due to COVID restrictions.

A handmade sign was “stolen by a drunken man” just a few days after it opened. The ‘official’ entrance to The Goods In is via Whittaker Lane off Bury New Road, but the postcode (M25 1SS) will take you down Infant Street, a scruffy narrow back street with an off-license, a car garage and a Hyde’s pub crowded together. 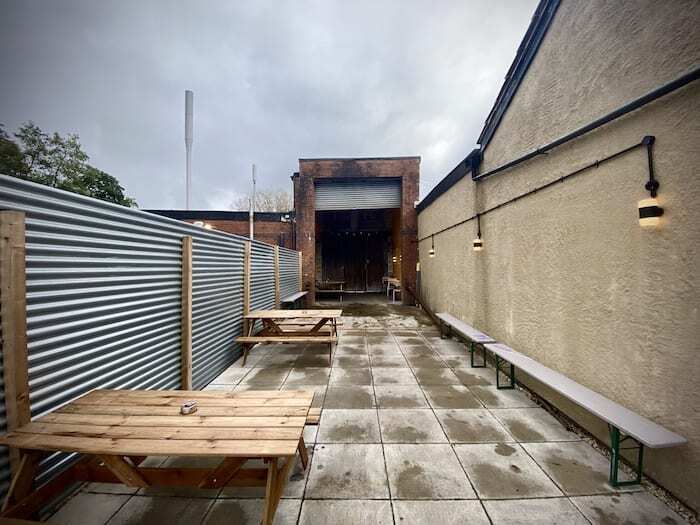 You’ll spot an unassuming ginnel, but the penny only really drops when you see benches, yellow washed walls, and a big wooden barn-style door at the end with a handle which discreetly says “PUSH!” 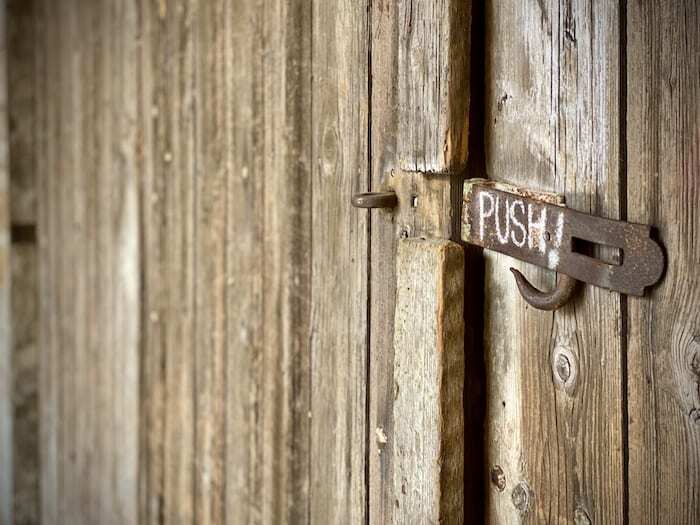 The Goods In is worth the hunt. The venue is a former rundown warehouse which, rumour has it, was once a neglected warehouse storing fireworks which accidentally went off in the middle of the night, damaging the roof. It was left derelict, bricked up and became overgrown with weeds. Not exactly steeped in cultural history but the new owners have renovated the former goods warehouse, transformed it into an inviting new restaurant and bar, and felt it necessary to keep the name. 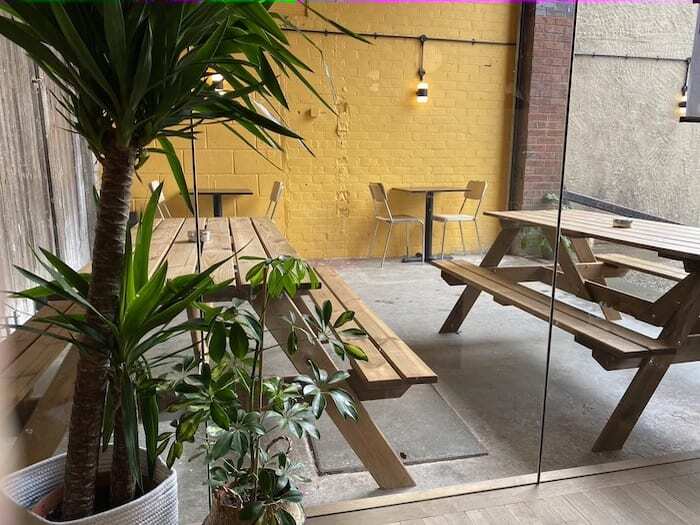 It could quite easily have been cheaply padded out with chipboard sheets and felt cold and sparse. Instead, The Goods In feels warm and welcoming, decked out with trendy pegboard walls, grey booths and burnt orange accents. 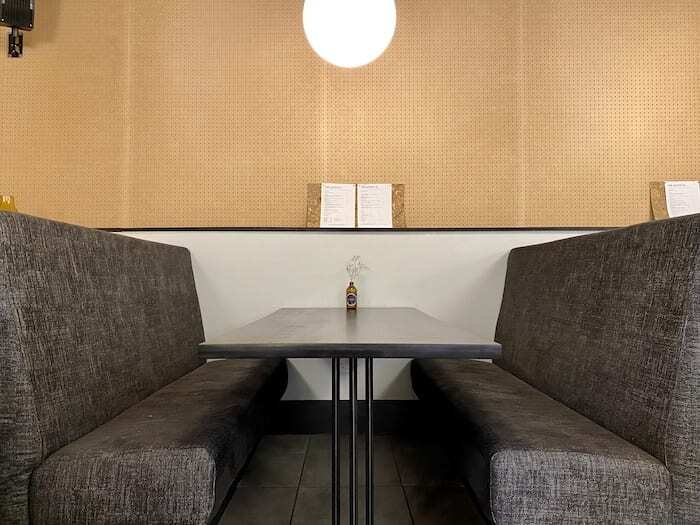 You can’t help but notice that it’s been done on a bit of a shoe string but that only justifies that they’ve done a decent job with such a massive space. 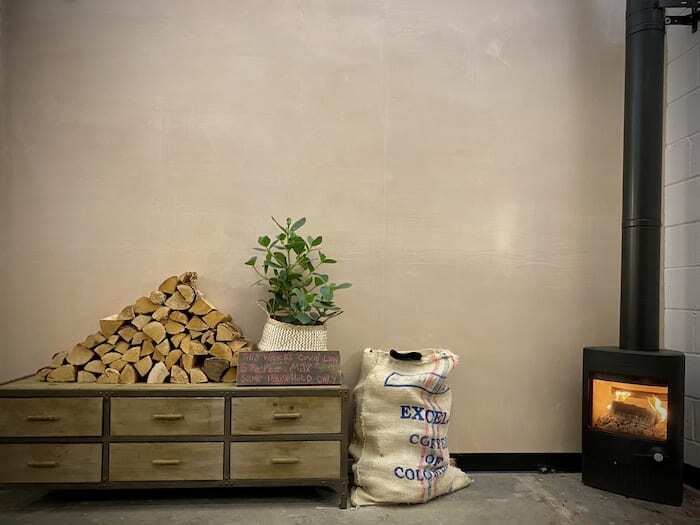 And that’s before you find out the restaurant has underfloor heating.

The open-plan space is a bit of international mix-mash of inspirations from “from DJ’ing adventures” in Brooklyn and Berlin but in a more sit-down environment for the time being with capacity for 100 covers. 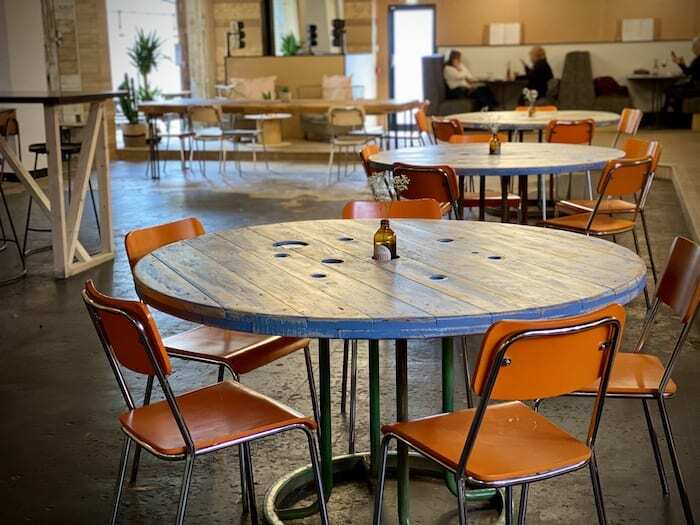 “Because of the size of the place, people seem confident they can socialise with distance,” says co-founder Neil Atkins. “We were born in this situation [COVID] so there’s millions of ideas that we just can’t do yet – such as supper clubs, bread making classes, and host events with DJs. 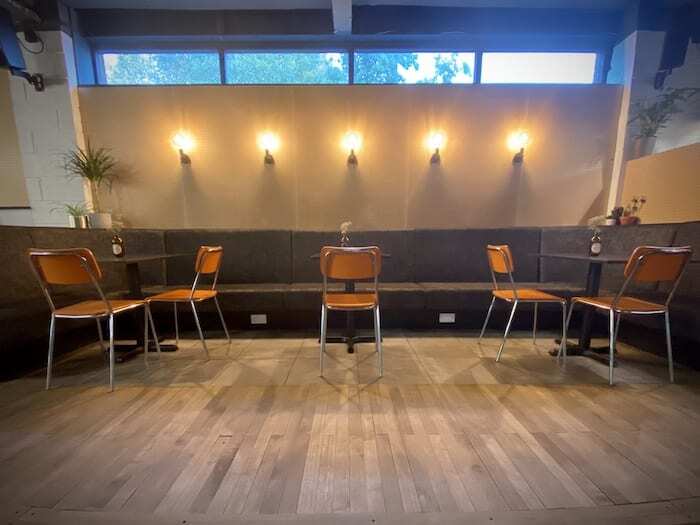 “We also want to instal a big bike storage for people coming to and from the park.”

Neil is one part of the pair behind the popular Prestwich village cafe bar, All The Shapes, which offers a similar product: light food, strong coffee and even stronger cocktails. The added value here, apart from all the extra room for activities, is the amount of craft beer on tap. 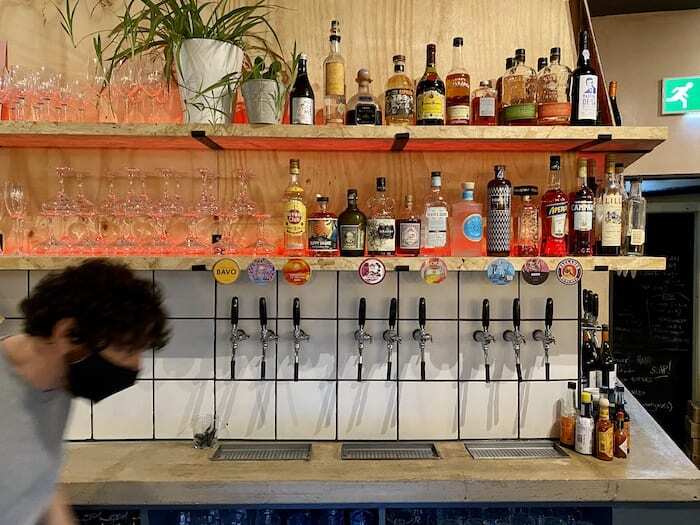 Behind the teal coloured bar there’s a selection of local craft ales and beers such as Blackjack and Cloudwater, but also many more from across the pond. Try a schooner or two while you peruse the cocktail menu.

The bar staff make their own cordials from seasonal fruits like plums which they use in their special cocktail menu. Anyone for a rum and plum? 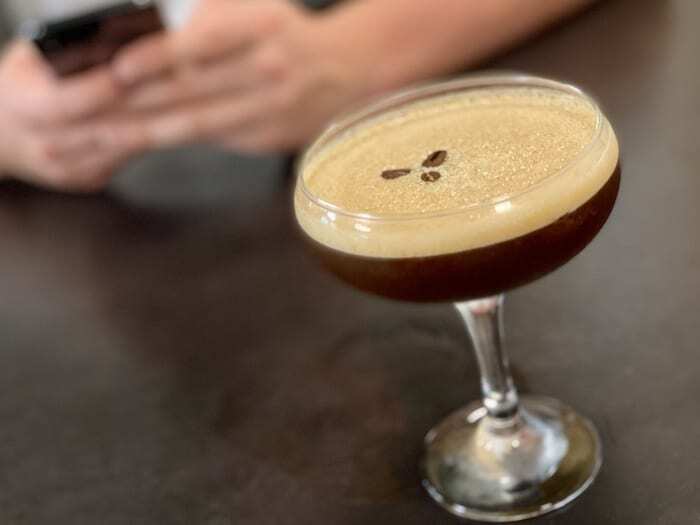 The menu will change bi-monthly but you can always order classics like an espresso martini made with Australian cold brew coffee liqueur. This place might well make the best espresso martini in north Manchester.

On to food, then, and the centre stage is an Australian cafe-style brunch menu served from 10am-3:30pm. 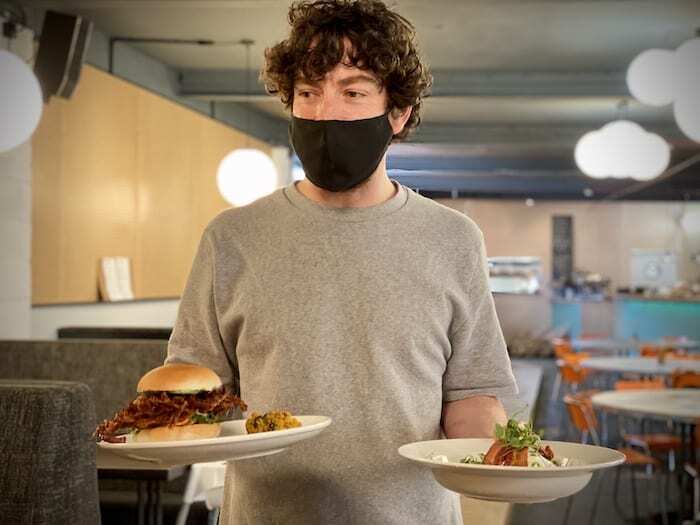 Choose from dishes such as Philly Cheese Steak (£7.50) using beer braised beef with caramelised onion, Emmental cheese peppers and mushrooms with mild mustard cheese sauce and sourdough; the vegetarian Brioche French Toast (£7.60) with blackberries, charred pineapple, mango puree and yoghurt; an ABLT (£6.80), which is a BLT sandwich with avocado; or a proper full breakfast. 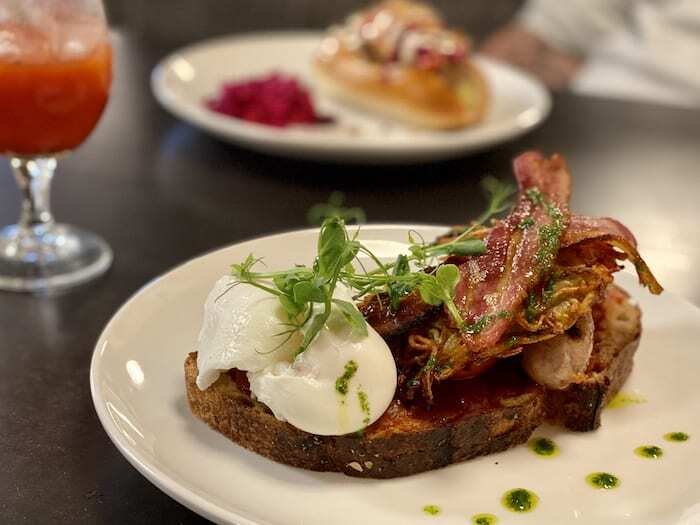 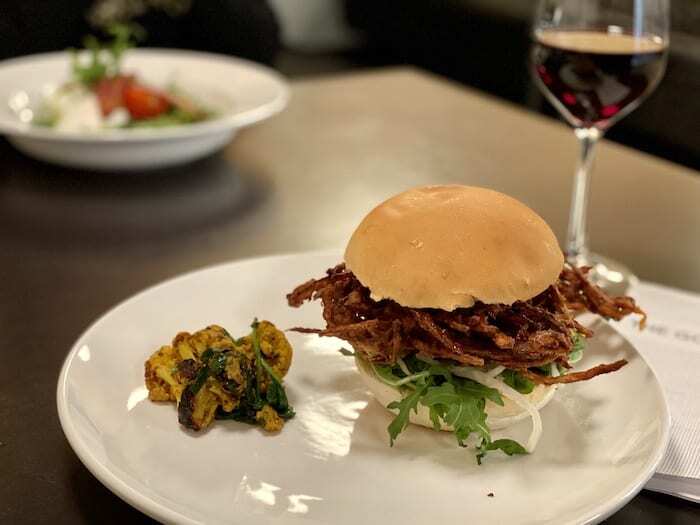 Sandwiches and Lebanese flatbreads are served in the evenings filled with slow braised lamb shoulder; blackened chicken; or heritage tomatoes to mention a few. There’s also hotdogs and pizzas if you fancy something a bit more bish bash bosh. 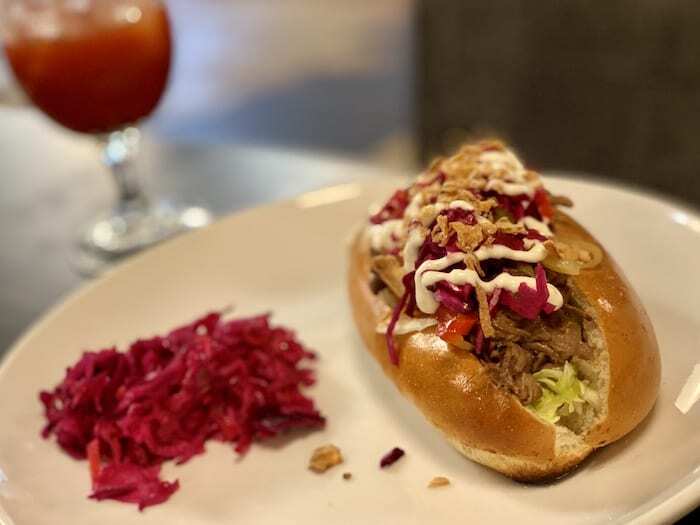 There’s an array of sweet treats displayed on the bar freshly sourced from local bakeries, such as cream and vegan doughnuts from Lupo Cafeteria, cakes and brownies from Silver Apples Bakery, and pretty little sponge bun cakes from Small Four Bakery that you’ll be tempted to put whole in your mouth. 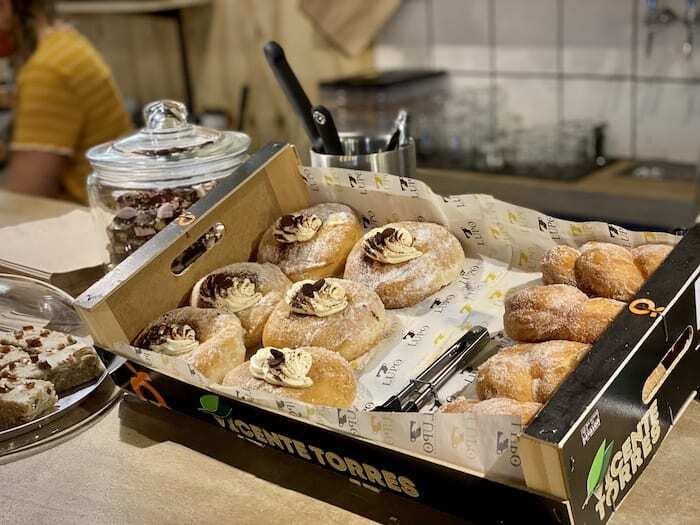 This family-friendly venue isn’t just the perfect watering hole for locals. With a metrolink station and entrance to the park just a couple of hundred yards away, it’s a great excuse for a trip to Heaton Park.

The Goods In is open from 10am-10pm Thursday to Sunday at the moment due to government restrictions but plans to extend hours and open for events as soon as possible.