Get ready to get On Your Feet – as the musical featuring the songs of Queen of Latin pop Gloria Estefan is heading to Manchester direct from the West End.

The show tells the inspiring true love story of Emilio and Gloria Estefan, their origins in Cuba, on to the streets of Miami and their journey to becoming global music icons.

The exhilarating musical On Your Feet features some of the most iconic pops songs of the 80s and 90s, including Rhythm Is Gonna Get You, Conga, Get On Your Feet, Don’t Want To Lose You Now and 1-2-3.

Winner of 26 Grammy awards, Gloria Estefan has sold over 100 million records worldwide, while her husband Emilio was a founding member of the pioneering Miami Sound Machine, who created a brand new Latin crossover sound – fusing infectious Cuban rhythms with American pop and disco.

The show opens at the London Coliseum on the West End in the summer, before heading out on a full UK tour from Autumn 2019. 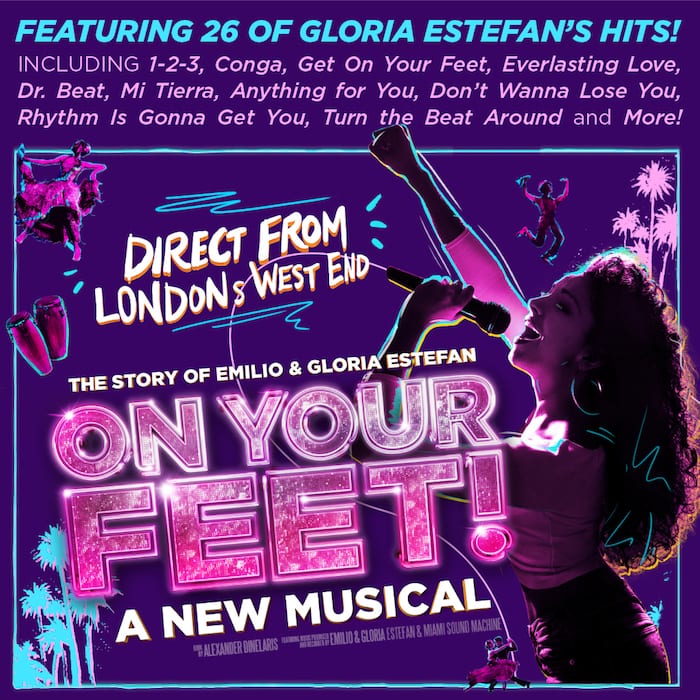 The Palace Theatre confirmed at the weekend that tickets are now on sale for the On Your Feet musical dates in Manchester, which runs from Monday October 28th to Saturday November 2nd.

The news comes hot on the heels of a string of big musicals confirmed for Manchester in 2019, including the Book of Mormon here for the first time in June, as well as the return of Ghost and Dirty Dancing in April and The Bodyguard as the big festive show all at the Palace Theatre.