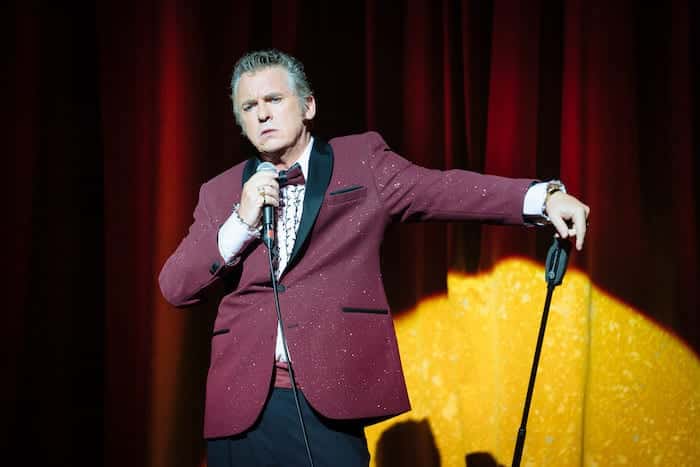 John Osborne wrote The Entertainer in 1956 when the country was divided by the Suez Crisis. This meant that there were lots of arguments in the House of Commons and the British public began to question who they were and where they sat in terms of national identity. Sound familiar?

This classic play has always been bleak but updating it to the 1980s against the backdrop of the Falklands War is inspired. The Suez Crisis finished the career of prime minister Anthony Eden but the Falklands War gave Margaret Thatcher the biggest majority since 1945.

She looms large in this production, which focuses on Archie Rice (a brilliant Shane Richie),  a comedian who is failing miserably. He is playing to theatres where laughter is replaced by silence and empty seats. He represents an England which has changed not only because of changing attitudes but, in this version, because what we find funny has been challenged by alternative comics like Ben Elton and Alexei Sayle.

The challenging thing about Archie is that he owns his failure. It’s the only thing he can control. The comedy circuit and gigging on the road means that he can escape from what awaits him at home.

He lives in a small house with his dad Billy (played to perfection by Pip Donaghy), who lives in a world he does not recognise, his wife Phoebe (Alice Osmanski), who drinks to forget the awful life she leads with Archie, their loyal son Frank (Christopher Bonwell) and their daughter Jean (Diana Vickers), who visits and realises she does not fit.

This is a play which confronts the audience in many ways.

Archie delivers his stand-up routine to you and the play excels when this routine takes place. It does so because the awkward silences that Rice refers to in his act actually take place, giving him more to work with and making it feel uncomfortable to laugh.

Shane Richie gives a career defining performance here. He is known for being upbeat but here he is a gin sozzled, womanising comedian with no real respect for his family or his shrinking audience. Filled with self-loathing on stage, he spits out insults to the audience and transforms before your very eyes. It makes for a stunning performance.

Alice Osmanski dons her slippers and shuffles about the house in search of a solution she will never find as Archie’s downtrodden alcoholic wife. She lives her life in a haze and Osmanski conveys her heartbreak that she will never mean much to her husband.

Pip Donaghy excels as former comedian Billy, who watches as his son’s failure engulfs the small house. He breaks into stand-up himself, breaking the fourth wall. Everything he says about immigrants and the state of the country feels very familiar from conversations you hear on a bus or a tram.

Christopher Bonwell is almost silent as the loyal son who lives in the shadow of his outspoken sister Jean, played with a genuine feistiness by Diana Vickers, who revels in the dialogue and realistic situations that the play presents.

There is a figure who is unseen, and this is Archie’s son Mick, a soldier in the Falklands.  The family sit and wait for news, interspersed with soundbites from Margaret Thatcher.

Director Sean O’Connor does a sterling job with this difficult play. It’s a grim watch. As the plot unravels, Archie’s behaviour gets worse as he steps on those around him with the force of a man wearing Doc Martens stamping on cockroaches.

Some may find it too realistic and familiar for it to entertain them fully. But it’s worth watching for Shane Richie’s performance alone. He owns the role, playing Archie with a sense of menace and showing cynics who may have balked at his casting how it should be done. It’s a marvellous performance.

He is matched by a terrific team of actors, Chris James’ superb sounds design and Sean O’Connor’s vision that this play is still relevant.

He is right. The Entertainer is as uncomfortably gripping as it always was.

The Entertainer is at The Opera House until 2nd November.