The Cornerhouse Site is Turning into a 500,000 sq ft Office, Hotel & Leisure Complex

The Cornerhouse has been one of the city’s true gems. It’s been the throbbing heartbeat of Manchester’s cultural life for nearly 30 years and is now visited by half a million people a year. With three floors of art galleries, three cinemas, a bookshop, a bar and a café bar, it’s a rarity in the modern world; a place where substance lords it over style. Geek over chic.

Oxford Street is now being redeveloped and is officially called the Manchester Corridor (or Oxford Road Corridor) – ” a knowledge powerhouse, full of exciting world-leading research, pioneering clinical trials and cutting-edge medical procedures.” Microchips with everything. But it’s still got lots of bars, pubs and takeaways which cater for the needs of the billions of students who frequent this part of Manchester.

The former home to the Cornerhouse is to be transformed into a 500,000 sq ft office, hotel and leisure complex.

Manchester’s Cornerhouse bar and cinema are set to come down under plans for a massive mixed used development next to Oxford Road station.

Plans to relocate the facility, which has a bar, cinema, gallery and restaurant were first revealed back in 2010. It is due to move to HOME in around a year’s time. 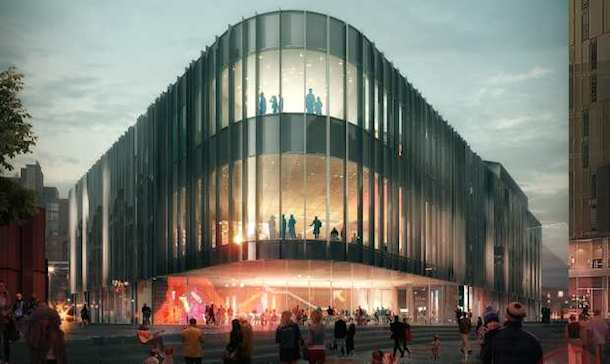 A huge 500,000 sq ft site on the corner of Whitworth Street West is being marketed to developers for flats, offices, shops, leisure and a hotel.

The site is one of the last pieces of the jigsaw in moves to regenerate that part of the city centre.

Council bosses are already developing the First Street plot down the road – including a replacement for the Cornerhouse in the new HOME arts centre – while work on a new block of apartments next door on Whitworth Street West has already begun.

Council chiefs say the plot – opposite the Palace Hotel– is a key strategic location that could become a new destination.

Despite several existing nearby hotels – including one coming up at First Street – they also believe there is enough demand for a new one near to the Oxford Road corridor and the village (another Holiday Inn?).

The move would also create a better gateway to the city from Oxford Road station, the second busiest in the city.

Manchester’s centre for international contemporary visual art and film, has announced its final exhibition before moving to its new ‘HOME‘ next spring.