The Apprentice: Iasha sails through but Lewis is on the losing side again 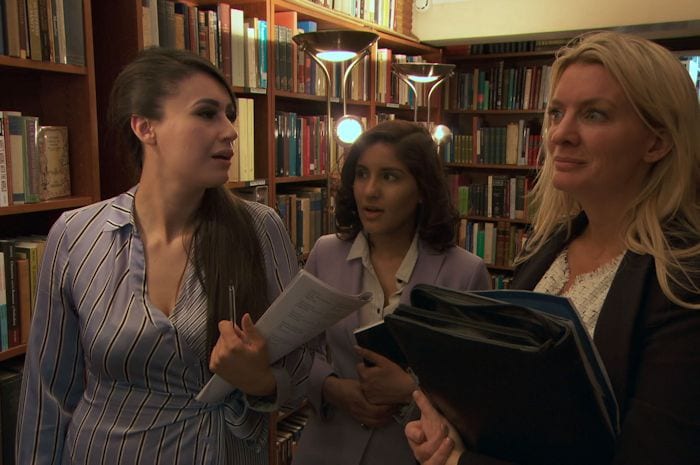 16 candidates, 12 weeks, one job, and some of the worst jokes you will ever hear in your life.

Wednesday night is The Apprentice night.

In The Apprentice, the candidates are forced to compete in a series of humiliating tasks in which they get to show how incompetent they are. At the end of each programme, at least one of the candidates on the losing team is fired and gets to thank Lord Sugar for the opportunity before jumping into a waiting taxi and explaining why Lord Sugar will come to regret his decision.

The winning team, meanwhile, gets to go to a spa or drink cocktails – both if they’re lucky.

At the end of the series, the least incompetent wins the prize – going into business with  Lord Sugar and a cool quarter million pound investment.

But never, ever underestimate Lord Sugar. He’s seen it all and he won’t stand for no bullshit.

Three of this year’s candidates – Kenna, Lewis and Iasha – are from Greater Manchester, so naturally we are following their progress.

The story so far.

In Week 2 Kenna, who wanted to go into business with Lord Sugar making ice cream, led the boys to defeat in a task which involved making iced lollies. The task was lost because a corporate client refused to buy the lolly Kenna’s team had made for her because she thought it looked like a penis. Lord Sugar thought it looked more like medical waste.

Lewis has been sailing close to the wind from the beginning. In Week 1, he led the boys to defeat in a travel-related task (flogging safari park tours in South Africa) and was cautioned by Lord Sugar for losing his temper in the boardroom. Lewis wants to go into business running a travel company with Lord Sugar.

Iasha, on the other hand, has been doing rather well. In the third episode, her team created a toy called Slime Kingdom. This consisted of a toy unicorn called Sparklestar, which bore more than a passing resemblance to My Little Pony, and a small amount of slime because, er, children love slime.

When the retailers didn’t understand the unicorn + slime concept – just like millions of TV viewers – Iasha came to the rescue, explaining that the unicorn lives on a planet made from slime. Brilliant.

“One of my skills is winging it,” she explained. Clearly, this girl will go far.

And so it proved. Last week she became the first person in the history of the programme to make a profit of more than £1m selling a product they had designed to retailers.

She may look and sound like she wouldn’t say boo to a goose, but ignore her at your peril. She’s clearly made from the right stuff. But not slime. Obviously.

In last night’s episode, it was the buying task. The candidates were given a shopping list of nine items which they have to buy at the lowest possible price. This gives them the chance to show Lord Sugar and an audience of millions just how bad their negotiating skills are whilst running round like headless chickens.

But this is no ordinary shopping task, because amongst the items on Lord Sugar’s shopping list are a quant, a snaffle (specification eggbutt) and a rigger jigger.

Last year, the candidates went to Malta. This year, it was Oxford and Cambridge. And that’s the closest any of them will ever get to a top university. Because they may look the part, but most of them have got more chance of appearing on Love Island than University Challenge or Mastermind.

The teams are no longer divided into boys and girls because at the rate the boys were getting fired, there won’t be any left soon. Instead, it’s Team Unison v Team Empower. One team won, but I have no idea which because, with their sharp suits, slick hairstyles and freshly waxed skin, most of the candidates look and sound exactly the same.

What I do know, and this is all that matters as far as we’re concerned, is that Iasha was on the winning team again and sailed through to the next round like Man City on their way to another cup final.

And Lewis was on the losing side again. But at least he wasn’t one of the three chosen to face the wrath of Lord Sugar. And that’s progress in our book.