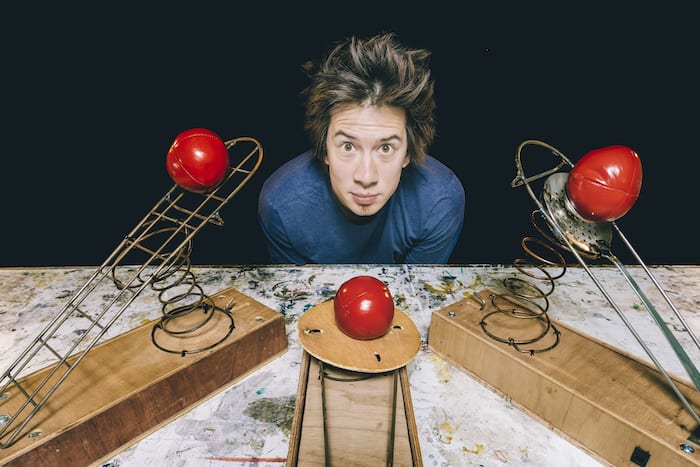 Long Shot followed one man (Matt Pang) kitted out in an eccentric red jumpsuit, not uttering a single word, using experiments to entertain and push the boundaries of what is possible.

From high-flying balls in buckets to water-bursting balloons, each carefully co-ordinated  experiment flowed into the next.

And forget theatrical opening events which drag on. This was an intense show lasting roughly an hour which kept the energy in the Robert Bolt Theatre space high and made the audience hungry for more.

The audience was mixed – testament to Refract:18’s inclusive approach – with something for all ages.

I have never seen anything quite like Long Shot before but I’m certainly glad I did. It gives the rest of the festival programme a lot to live up to.

Coming up over the next nine days are (deep breath) miniature theatre in a magical canvas dome, a pop-up cabaret club, a magnificent menagerie of puppets in Sale town centre and, this weekend, music from cult British band Tankus the Henge and multi-instrumentalist Minute Taker.

One not to miss next Friday is Manchester’s own reggae band Jeramiah Ferrari taking to the stage in the Robert Bolt Theatre.

There’s mayhem combined with music at Refract:18 next week too, with Showstopper! The Improvised Musical unfolding in response to suggestions by members of the audience.

Queer cabaret Mother’s Ruin promises to be plenty of fun and there’s a closing party featuring headliners The Magic Numbers and Ren Harvieu.

Refract:18 is an ideal festival for school holiday entertainment. With an excellent choice of family friendly events which are just as much fun for adults as they are for kids, it scores serious points where so many other festivals fall short.

A bumper programme of theatre, crafts, puppetry and music includes activities like Our Kids Social’s Make Do & Bop – that’s silent disco fun for younger ones.

Adults are encouraged to release their inner child with a number of arty opportunities to get involved with. There’s Overdrawn, a free and one-off interactive art event where you can add your own contributions, whilst re:cast is a series of art installations around Waterside’s spaces during the festival.

You can pick and mix events. No camping or queuing. Just book individual tickets online and turn up on the day.

It’s on at Waterside, Sale until July 28th. It’s easier to get there than you might think. The Arts Centre and surrounding plaza are close to Sale tram stop.