WATCH | How long does it take for someone to pick up a bottle on one of Manchester’s filthiest streets? 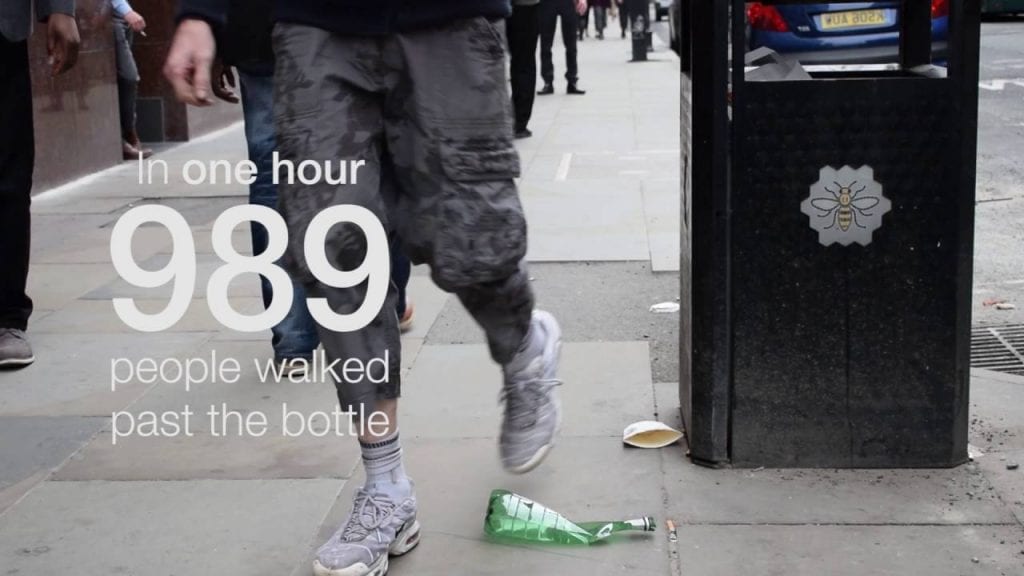 It costs £7.5 million a year to remove the litter from the streets of Manchester and to clean them – that’s £14 per person. Now residents, shopkeepers and business owners on one of the most littered parts of the city centre are joining forces with Manchester City Council to take action.

The Trash Talk campaign will focus on cleaning up Oxford Street and Oxford Road and will use innovative ways totry to change people’s behaviour.

‘Ballot bins’ will encourage smokers to use them as ashtrays by asking them to use their cigarette butts to vote on a variety of issues, starting with whether they think England will win Euro 2016.

It’s a technique which has been trialled in parts of London where it’s reduced cigarette littering by 26%.

“It’s a slightly different approach. Fun and interactive. Rather than wagging a finger at people, we want to engage with them,” says Gavin Ellis, co-founder of campaign organisers Hubbub.

He came up with the idea during the pilot project in London when he noticed that most of the people who were dropping cigarette ends were young males.

“We are doing it to reduce litter, but we want to ask questions about things that people are interested in.” So the question they decided put on the ballot bin wasn’t about litter but whether Ronaldo or Messi is the best footballer in the world.

The letters on the bins can be rearranged to allow the questions to be changed regularly, so expect to see things like ‘Are the Smiths or the Stone Roses the best ever Manchester band’ and whether United or City will finish higher next season.

The campaign will also use more traditional ways of getting the message across. Posters of people who live or work in the area will be displayed in shop windows and on railings to encourage people to take pride in their environment.

According to research by Hubbub, 81% of people in the north west say that seeing litter on the streets in their local area makes them feel angry and frustrated but do not feel in a position to confront litter offenders. 57% said that they would be afraid to confront people who drop litter, while 45% say that they often end up clearing up other people’s litter.

Chilango general manager Borja Monasterio says:“We all loathe litter but that’s not the only reason we want to stop this blight. Litter is bad for business but it’s really hard to stop people from doing it and quite frankly I don’t feel safe enough and don’t have the time to tell people to pick up their junk when they have just thrown it onto my doorstep.”

The Trash Talk anti-litter campaign will run from June until October 2016 and will be rolled out to other parts of Manchester if it’s successful.

Would you pick up a bottle left on the street? See how long it takes someone to pick up a plastic bottle on Oxford Street.