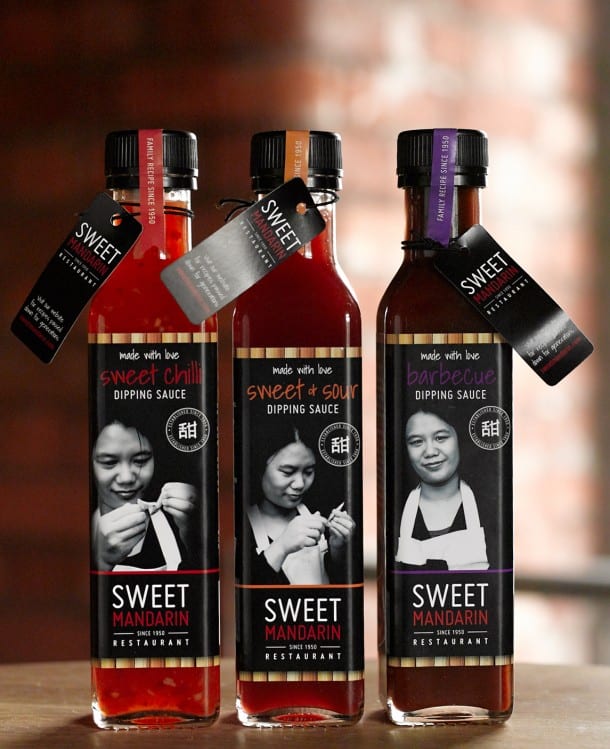 Since opening the hugely successful Sweet Mandarin Restaurant in Manchester in 2004 twin sisters Lisa and Helen Tse have now extended their empire beyond the restaurant, cookery school and corporate team build events offer with the launch of a new range of three gluten-free Chinese dipping sauces, Sweet Mandarin Sauces. The range will offer fans of the restaurant and Chinese cooking alike the opportunity to re-create the real taste of authentic Chinese cooking at home.

The range of Sweet Mandarin Sauces are a reflection of both Lisa and Helen – original, modern and very stylish. But there is much more to these savvy sisters who are giving Chinese cooking a new twist with three exciting new flavours guaranteed to add flair to any dish.

Totally committed to the dream of running their own business the savvy young entrepreneurs put their high flying ‘day’ jobs on hold to embark on the challenge of opening the Sweet Mandarin restaurant eight years ago and continue with the family business of Chinese restaurants. Since then the sisters have won multiple awards recognising their skill and talent, including:

In between all this they have also found time to become regular TV and radio stars, not only appearing on Gordon Ramsay’s F Word, but also on the BBC’s Blue Peter, Radio 4’s Woman’s Hour and BBC1’s Inside Out programme.

Commenting on the launch of the new range of sauces Lisa said: “Our family has a long history of cooking and we are the fourth generation to make and sell food for a living. Our grandmother Lily Kwok came to this country from Hong Kong and eventually opened her own restaurant. Similarly, our parents had their own takeaway so we have been brought up to appreciate the importance of great food and from a very young age we were encouraged to help whether it was clearing and washing up to eventually chopping and slicing. My first memory is of helping mum prepare a Chinese Banquet.”

Of the two sisters Lisa is particularly passionate about cooking, especially Chinese cuisine (at school in home economic classes she chose to cook stir fries rather than apple pie) and it is Lisa who has developed the recipes for the range of three sauces.

She has already demonstrated business and commercial acumen by setting up a recruitment solutions organisation and running a highly successful Chinese takeaway in Middleton.

Having gained an honours degree in Business Studies at Manchester Metropolitan University (while there she was one of only ten students out of 110 applicants chosen to attend Flinders University, Adelaide, Australia, on an exchange programme) before embarking on a financial career in the City.

Lawyer Helen is second chef, able to create and cook an entire menu, and has used her analytical and project management skills to take the concept on paper through to reality.

A Cambridge law graduate, she has been juggling a career as a solicitor with that of an author, making her the first ever British born Chinese author. Her debut book Sweet Mandarin, has already been published by Random House across 33 countries and will be available on Kindle from September 2012.

After graduating Helen worked for some of the most elite law firms in the UK including Clifford Chance and PricewaterhouseCoopers, but it’s her new role as second chef at Sweet Mandarin that is most exciting her. Her enthusiasm is infectious and like her sister, everything she does she’s giving it 110%.