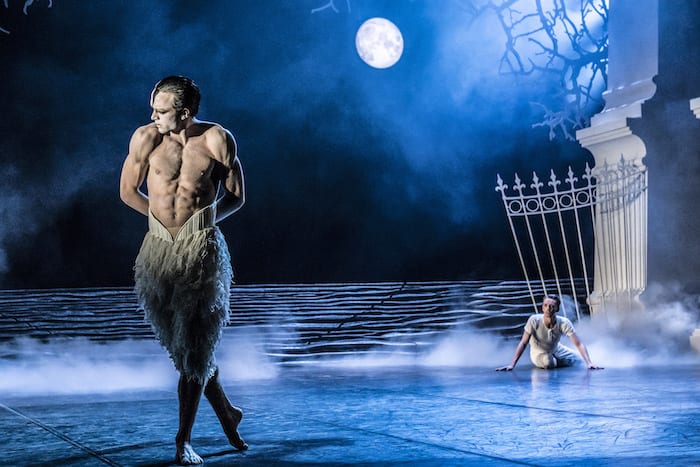 Matthew Bourne’s Swan Lake ruffled feathers when it premiered 23 years ago. Some people apparently walked out when the prince danced with the male swan, and the production was dubbed “the gay Swan Lake“.

Little girls cried that their parents had taken them to the “wrong Swan Lake”, said Matthew at the time. For these swans weren’t anything like those in ballets that had gone before.

The traditional, elegant, tutu-wearing female corps-de-ballet had been replaced with a menacing male ensemble, strong and muscular, black-eyed and clad in feathered harem pants. Hissing and feral, these swans would break your arm given the chance. 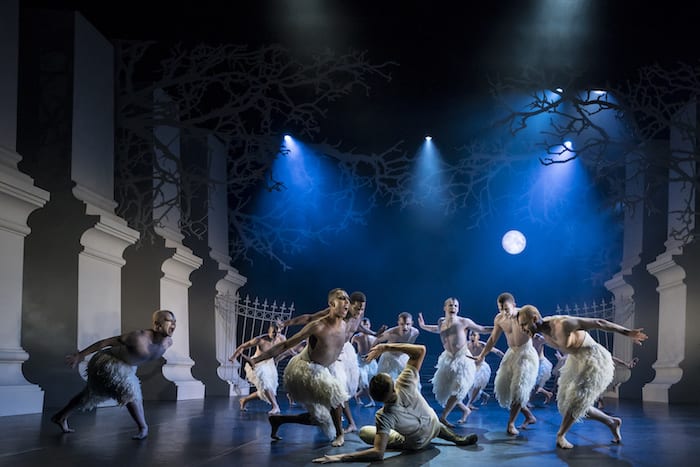 Debuting in 1995, the production of Swan Lake went on to become the longest running ballet on the West End and Broadway. It shattered conventions, turned tradition upside down and took the dance world by storm.

Now, the legend has returned to The Lowry. The male swans have become familiar over the decades, but they’ve lost none of their power in this modern interpretation of Tchaikovsky’s masterpiece, which has been updated for the 21st century.

From the graceful opening monochromatic projection of a flying swan silhouette and an eerily lit male swan dancer in a giant ornate mirror above the prince’s bed, to the heartbreaking finale, this production is nothing short of a triumph. 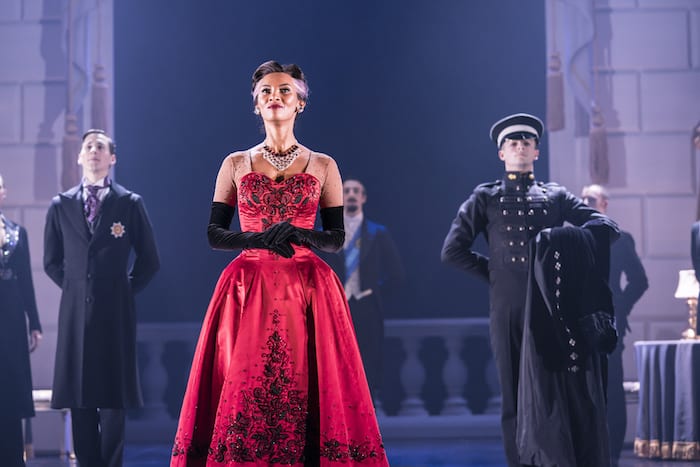 The story begins with the prince dreaming of swans, but swiftly unfolds into a parody of royal life. The pampered prince is groomed and preened by doting servants before joining the queen in their repetitive ceremonial roles. All the while, they are hounded by paparazzi and doting fans.

The prince’s girlfriend provides light relief in a memorable comic role. Decidedly unregal, her behaviour during the ‘ballet within a ballet’ that the royals attend is both cringeworthy and amusing, from loud laughter and receiving a phone call to rustling a bag of sweets and dropping her sparkly handbag on the stage.

Having split up with his girlfriend and been humiliated at a seedy nightclub, the prince flees to a lake. Here we see the male swans, athletic and powerful. 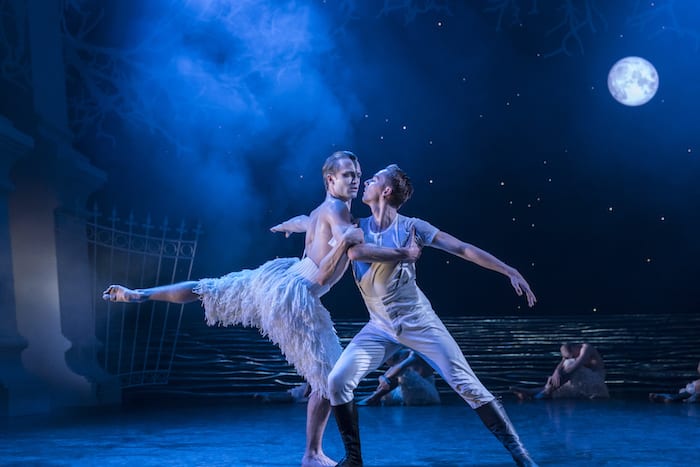 The choreography of this first meeting between the prince and the main swan is captivating, their initial wariness around each other developing into synchronised movements. It’s beautiful.

A royal ball at the palace offers a complete change of scenery and some catwalk-worthy dresses. The main swan is now ‘the stranger’, dressed in black leather trousers with a rock star swagger, downing shots and smoking cigarettes.

This alpha male, seductive and sultry, dances with almost every female guest, including the queen, who is not immune to his charms. The erotically-charged display is unbearable for the prince to watch. 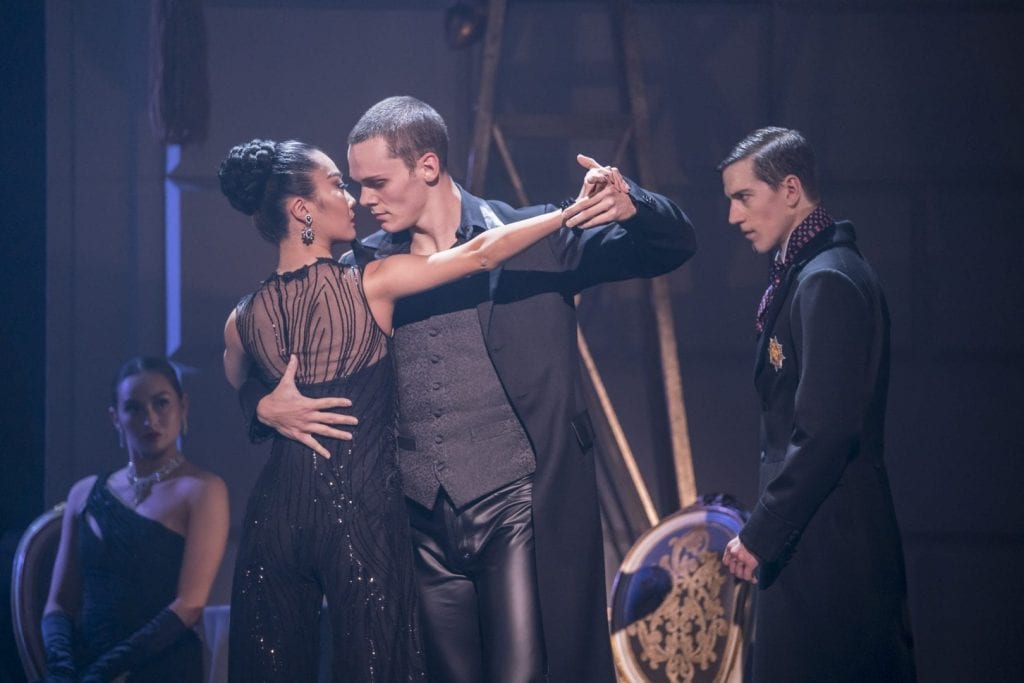 A dazzling dance where partners are swiftly exchanged sees the stranger and the prince flung together. Whereas the previous encounter was dream-like, this one swiftly becomes nightmarish, the dancers moving in slow motion to jeer and point at the prince as the stranger watches on, seemingly unmoved.

The prince’s subsequent descent into madness is genuinely unsettling for the audience, with medics wearing rubber face masks adding a creepy edge worthy of a horror film.

Then come the swans, emerging from under the bed and within the sheets themselves. This time, their aggression is unchecked. 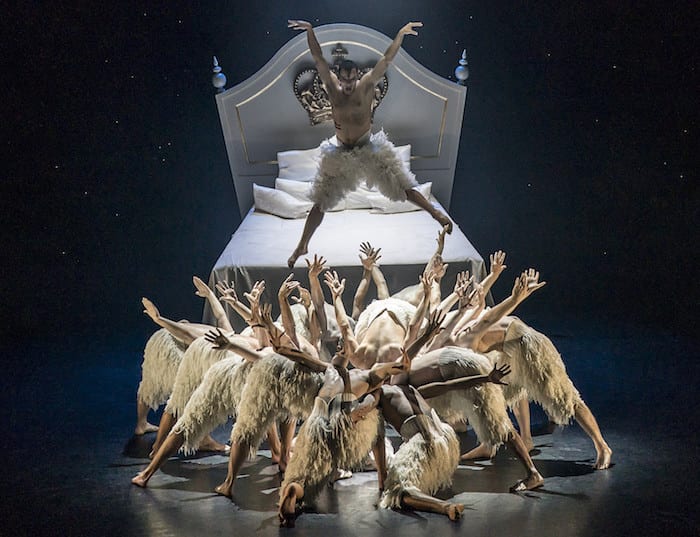 It’s a visceral, heartbreaking finale, right up until the final moment, where a glimmer of hope shines briefly but brightly and beautifully. It’s impossible not to feel moved. Warning: tears may be shed.

“It’s a very human piece and global – both in its message and in the way that it brings us all together,” said Matthew in a recent interview.

And that sentiment is echoed around the packed theatre on its opening night, where the rapturous applause lasts a good ten minutes and is accompanied by loud whoops and cheers. 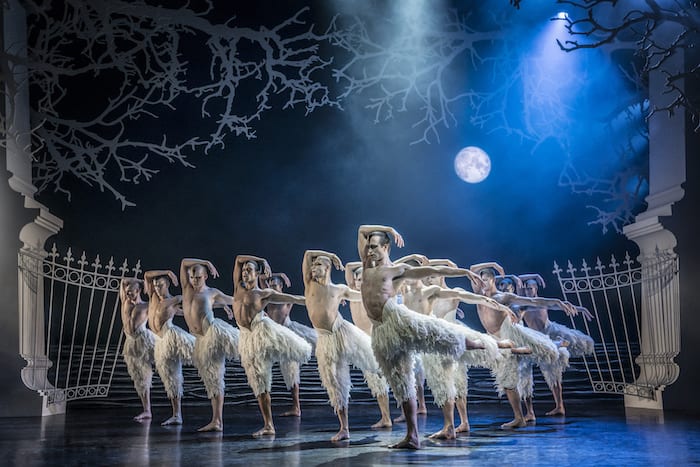 It’s easy to see why this New Adventures show has such an impact on those that see it. Indeed, many of the dancers in this production began their journey into dance when they were taken by their parents to see it as children.

This is the ballet that made boys want to dance. And it continues to inspire.

It’s a flawless production, from the creative choreography to the striking set design and Tchaikovsky’s soaring score. These swans have lost none of their power over the years. They may not be en pointe, but they’re certainly on point.

Matthew Bourne’s Swan Lake is at The Lowry until Saturday 1st December 2018.