Charlie Chaplin’s slapstick remains beloved by audiences. Newcomers can view his classic films everywhere online, and spending just two minutes doing this reminds you what a truly talented man he was.

Laurel and Hardy have recently been rediscovered as the comedy icons that they are via the hit film Stan and Ollie starring John C.Reilly and Steve Coogan.

So teaming these two comedy maestros together in this old school Vaudeville production is a genius move by the innovative masters of the unexpected, Told by an Idiot. The two arrived in America on the same ship, and we watch in awe as they perform a series of sketches in the style of the originals. 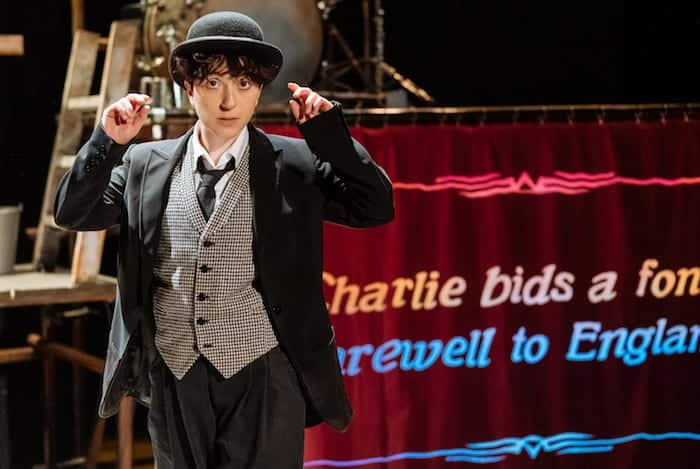 Complete with dialogue and intertitles beamed onto a make-shift screen (a red curtain), we witness the pratfalls and physicality that you rarely see anymore.

Even though the events in the play are fictitious, there is something heartwarming about watching these two wonderful characters back entertaining us with these mini plays without words.

Sara Alexander provides the piano based soundtrack to the frenetically funny set pieces, and her interaction with the audience is delightful. Nick Haverson’s pillow-up-the-jumper approach to Oliver Hardy, complete with his iconic walk, takes you back in time immediately.

Jerone Marsh-Reid is superb as Stan Laurel, and his physicality is a sight to behold. He is one mighty mover, bringing something contemporary whilst embracing the nostalgic value and sentiment that many in the audience have for these fine comedians.

Nuana Sandy’s choreography is inspired, as it is instantly appealing with its nods to the past and today. 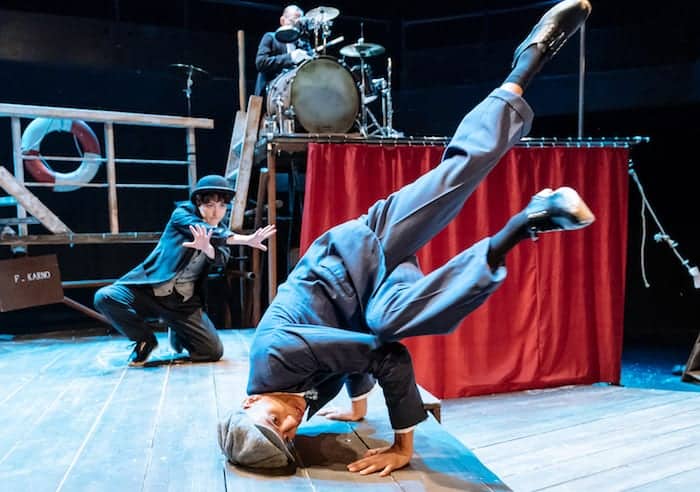 Amalia Vitale recently upped the cute factor as the voice behind Lula the Alien in Shaun the Sheep 2: Farmageddon. Here, there is something welcomingly innocent and quaint in her portrayal of Charlie Chaplin; the trademark walk remains, but there is also touch of The Big Top about her performance and it reminds you of the thrill of watching circus performers.

She does leave you breathless at her energy. But she also communicates and connects with the audience, and the effect is mesmerising.

Paul Hunter directs with a lightness of touch but brings something quirky and surprising, and there are plenty of moments that leave you open-mouthed. My own particular favourite is a scene featuring Charlie’s mother giving birth to him – Bowler hat, cane and all.

Ioana Curelea’s set design brings the piece to life, providing the performers with many places to launch and land, including a boat complete with rocking bunk beds. 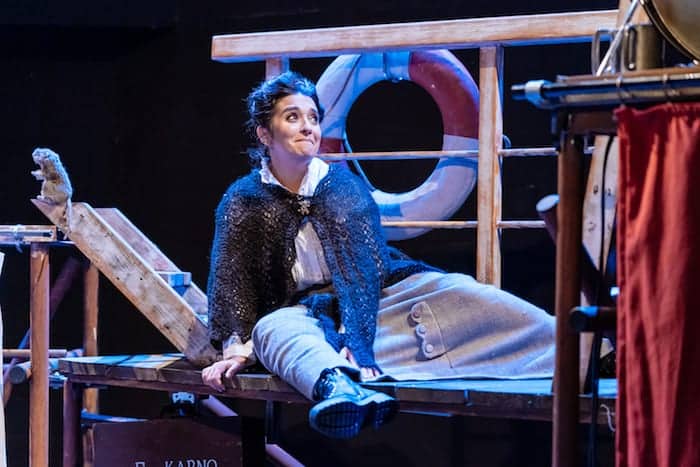 The show is one hour and 40 minutes without an interval, and it could lose 10 minutes to make it a tad more streamlined. Some may find it all too inconsequential for their liking, as there are moments when it does lack focus and many of the sketches do blend into one another. It is not always that easy to follow where you are.

But even taking this into account, there is still a great deal to savour and devour because the physical comedy is completely on point and joyful. I could hear people laughing all around me, and the show breaks through language barriers at a time when we really need that.

In a world filled with angry noise on the likes of Twitter and the news, I found myself completely immersed myself in the sound of silence and mime and I left HOME smiling from ear to ear.

The Strange Tale of Charlie Chaplin and Stan Laurel is at HOME until 8th February.