The story of Manchester in 101 objects: #20 the intriguing history of the Hidden Gem 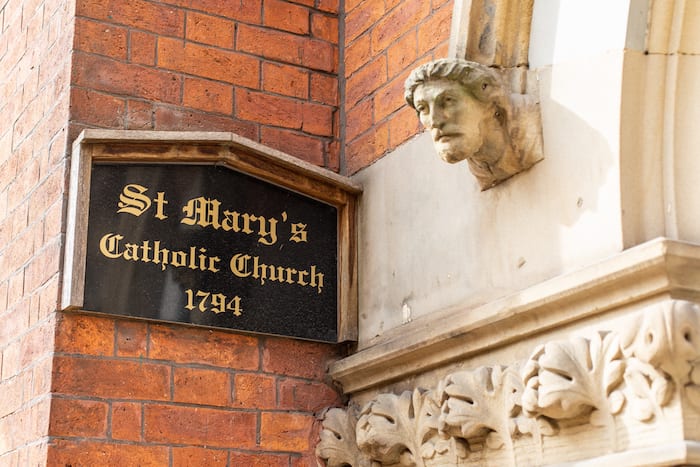 Manchester has long been a mainly Protestant city. The Cathedral describes itself as Anglican, the church in the centre of the city is the Protestant St Ann’s, and there are still some remaining non-conformist chapels and meeting places in the centre.

St Mary the Hidden Gem, the only Catholic church, has a somewhat lower profile, as its name suggests.

When it opened in 1794, the Hidden Gem was the first Catholic church to be built in England for some 250 years . After Henry VIII broke the church from Rome in the 1530s, religious leaders were fearful of openly displaying their Catholicism. 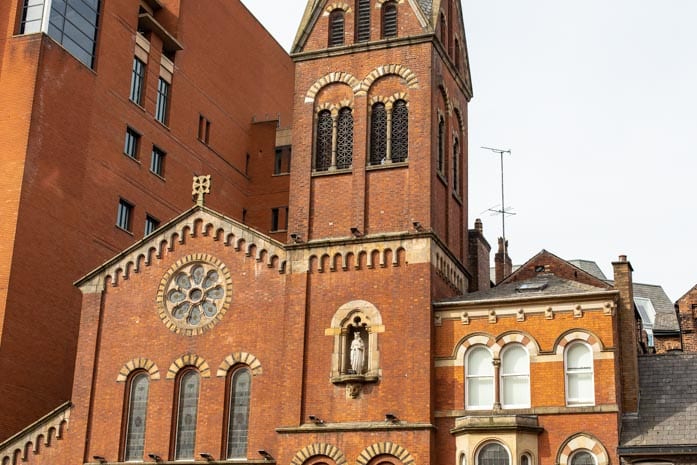 During the 17th century, Catholicism became increasingly ostracised, culminating in the so-called Glorious Revolution of 1689 which secured a Protestant succession for the Crown.

Increasingly, laws were passed to tighten discrimination against Catholics. Mass in Latin was banned. Catholics could not teach, practise law, own a horse worth more than five pounds, or serve in the armed forces (in case they sided with the Pope and Britain’s enemies). In Manchester, Catholic families met secretly to conduct services.

It wasn’t until the late 18th century – with the Protestant succession finally secured – that the authorities began to relent.

In 1774, a Catholic chapel was established in Rook Street (near modern day Fountain Street) dedicated to St Chad. When the chapel burned down in 1846, St Chad’s moved to a new church at the bottom of Cheetham Hill Road which is there to this day.

In 1780, the government tried to scrap much of the anti-Catholic legislation, only to find the London mob hostile to change – a rare instance of mass protest to maintain the status quo. It resulted in England’s worst outbreak of violence, the Gordon Riots, and hundreds of deaths.

Most of the remaining anti-Catholic discrimination was finally expunged in 1829 with the Roman Catholic Relief Act.

Meanwhile, Father Rowland Broomhead, rector of St Chad’s, had bought a plot of land near Deansgate in 1794 and obtained permission for a more permanent place of worship there. The church was dedicated to St Mary on 30 November 1794. Mary was chosen because the original church in Manchester – now the Cathedral – was dedicated to her.

A plaque on the wall by the entrance of the Hidden Gem proclaims “1794” but the building now on Mulberry Street is not the late 18th century original. In the middle of the day on 8 August 1835 a tearing, breaking sound could be heard from the roof, which duly collapsed.

The firm of Weightman and Hadfield rebuilt the church in an eclectic mix of Norman, Gothic and Byzantine styles that horrified Augustus Welby Pugin, the country’s leading Gothic architect, who raged how “it shows to what depth of error even good men fall, when they go whoring after strange styles”. 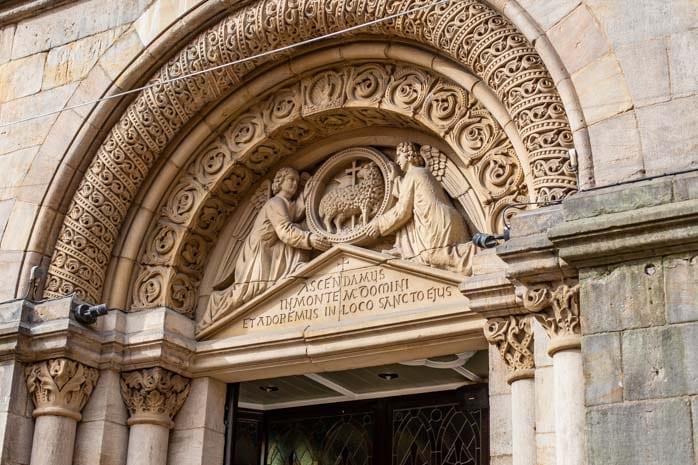 Cardinal Vaughan of Salford came up with the description “the Hidden Gem”. He also obtained a medieval font for the church and added the carved doorway which came from Germany.

However, the grandest statement in Manchester of resurgent Catholicism was not the Hidden Gem but the Church and Friary of St Francis in Gorton, better known as Gorton Monastery.

By creating one of the tallest churches in the country, set cleverly on the edge of built-up Manchester, the Franciscans with the help of Pugin’s son, architect Edward Welby, could show Protestant Manchester looking up at the church in the distance that the Catholics had clearly returned.