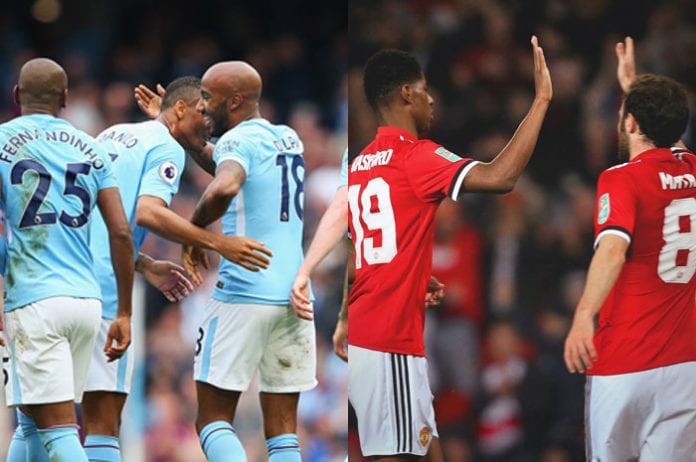 This time last week City were top thanks to alphabetical advantage. This week they sit top on goal difference following another goal rout against Crystal Palace on Saturday.

They have scored twenty-one goals so far this season in the Premier League and only conceded two in return – not a million miles off their start to last season when at the same point they had scored eighteen goals and conceded seven.

Pep Guardiola spent big in the summer in an attempt to bolster what was a very suspect defence and so far it seems to be money well spent.

United have also made a flying start to the new season scoring seventeen goals and also only conceding two and are also looking like title contenders. Under the guidance of Jose Mourinho, United fans are finally enjoying the sort of football they are used to watching.

Both sides have a team of superstar players and managers who are proven winners and both have been tipped by the experts to be in contention for the title.

So who will the key players for both teams based on what we have seen so far this season?

Looking at attack first, the two obvious players are Sergio Aguero, who is now two goals away from being City’s all time leading goalscorer, and Wayne Rooney’s replacement Romelu Lukaku, who is proving wrong the people who questioned if he could perform at the highest level.

Both players have six goals in the opening six games of the season and will no doubt be contending for this season’s Golden Boot – as long as both can stay fit for most of the season.

They were both in the top five goalscorers last year, with Lukaku finishing second behind Harry Kane on twenty-five goals and Aguero coming in fourth with twenty.

Sterling and Gabriel Jesus are not too far behind with the England international netting five times so far and the Brazilian who was on the bench for the game against Palace bagging four.

Anthony Martial, who always looks dangerous when he plays, is next with three goals to his name so far this season.

As usual there are a number of creative midfielders assisting, none more so than City’s David Silva who has racked up six assists so far, despite – or maybe because of – a questionable haircut in the summer.

He is closely followed by United’s midfield maestro Henrikh Mkhitaryan who has five assists to his name. Kevin De Bruyne is currently joined fifth in assists with Aguero on three each, and the injured Paul Pogba follows them on two assists.

Guardiola is obviously pleased with the quality being produced by his players and the selection headache they are providing him with – something he is happy to have.

“You are not going to have every player playing three games in a week for 11 months. We need that competition. If the next guy is playing well, they have to play well and keep winning. That’s how you get the best performances. We need Ilkay Gundogan to put pressure on Kevin De Bruyne and David Silva, for example.”

United’s Nemanja Matic follows with a total of 416 successful passes.

Both City and United have only conceded two goals so far this season, so defence has been key to the early success of both clubs.

City were boosted to have Vincent Kompany seemingly over his repetitive injuries only to have him pick up a knock on international duty which saw him miss the 5-0 thrashing of Liverpool and subsequent games.

“We put ourselves in a position where we had to defend to keep the result, which we did extremely well, with a good keeper, with good defenders, with the substitution of Smalling, so I am really happy.”

In David de Gea, Mourniho has more than a good keeper. He has arguably the best in the world at the minute – and it is no surprise to see him sitting top of the clean sheet statistics with five clean sheets to his name so far this season.

City’s Ederson trails him with three and is a vast improvement on the very shaky Claudio Bravo last season.

Both clubs will be hoping they can keep all of their key players fit. With so many games left to play and the pressures of Champions League football to factor in, there will be many twists and turns to come.

So although there is an awful long way to go in this season, the stats so far are stacking up to hint at another Manchester battle for the Premier League title.