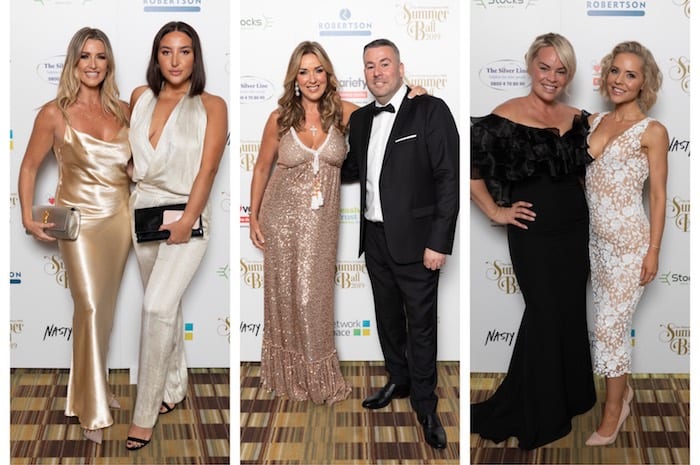 Star guests and VIPs were going for gold as an astounding £318,000 was raised at the annual Michael Josephson MBE Summer Ball.

Inspirational fundraiser Michael was joined by famous faces including Hollyoaks stars Steph Waring, Tamara Wall and Nicole Barber-Lane, lifestyle gurus Nik and Eva Speakman, footballer’s wife and entrepreneur Chantelle Heskey and charity icon Dame Esther Rantzen and around 400 VIP guests at the Hilton Hotel on Deansgate for the fundraising extravaganza on the hottest night of the year so far.

Former Real Housewives of Cheshire star Leanne Brown and Brookside favourite Claire Sweeney both dazzled in glittering gowns, getting into the golden theme of the evening, while Scottish rockers Texas crowned the incredible night of fundraising with a live performance at the Hilton Hotel on Deansgate on Saturday night.

Inspirational entrepreneur Michael overcame his own traumatic childhood to become a devoted fundraiser for local charities. Having raised £3.4m for the Childline charity in the North West in recent years, he decided to start his own charity ball last year.

Michael, 43, suffered horrific abuse in his childhood which resulted in him trying to end it all by jumping off a bridge at the age of 20.

But he miraculously survived and vowed to transform his life – he went on to set up his successful business Stocks 2015 Ltd, and was inspired to start an incredible fundraising journey raising millions for charities to try to help other vulnerable people.

Click or swipe below for a full gallery of images from the event:-

The huge sum raised will be split between Michael’s three nominated charities, Variety, the Children’s Charity, The Silver Line helpline for the elderly and the Cheadle-based Seashell Trust which supports children and young people with severe learning disabilities.

Michael was joined on stage by another inspirational fundraiser – 11-year-old Dante Marvin – who stole the hearts of the audience as he explained how monies raised for Variety really does change lives and changed his when they bought him a state-of-the-art wheelchair.

Michael said: “We have raised over £318k which is absolutely amazing and will changes the lives of so many people, we have made a difference tonight and thanks so much to all our supporters and donors.

“I thoroughly enjoyed the evening with the highlight for me seeing the wonderful smile we put on Dante Marvin’s face following by the fantastic concert from Texas.”

Stars at the event were full of praise for Michael and all that he has achieved.

Actress Claire Sweeney, who recently finished filming on new BBC drama Scarborough, said: “I think it’s amazing that Michael has taken a negative situation in life and turned into such a positive. And he has spread his charity work right across the board to not only help children but vulnerable older people too.”

A sketch by acclaimed Salford artist Harold Riley of a young girl was one of the most eagerly-anticipated lots of the night, and raised an incredible £25,000 for the charities, while an exclusive Emma Rodgers sculpture went for £20,000.

Tens of thousands of pounds were also raised when scores of audience members made individual Elf on the Shelf pledges ranging from £100 up to £30,000.

Entertainment at the ball, organised by Outthere Events and headline sponsored by Robertson Group, was kicked off by Manchester rising star Nina Morton, and music through the three-course dinner was provided by saxophonist Matt Hines before Texas crowned the night.

The band, fronted by Sharleen Spiteri, led the party into the night with a raft of their biggest hits including Black Eyed Boy, Halo, I Don’t Want a Lover and Inner Smile.

And Sharleen, wearing a sparkling silver suit and ABBA t-shirt, even joked with the audience that she could stay as long as they liked, saying: “My flight out of Manchester is at 2.45am so if you want to stay partying with me that’s fine”.

The date for the 2020 Michael Josephson MBE Summer Ball has already been set for Saturday 6th June at the Hilton Hotel.