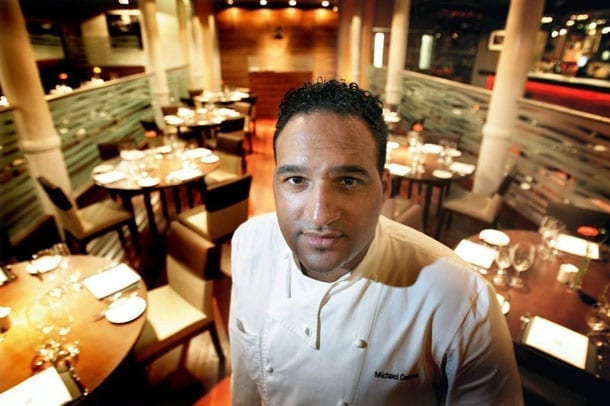 More Michelin chat, as the legacy of BBC’s Restaurant Wars lives on.

Michael Caines probably had a fair case to be annoyed at not even being mentioned in the show, especially as he won two Michelin stars at his restaurant at Gidleigh Park.

“It grates a little bit when you watch the BBC and it makes it sound like Manchester has not had a successful restaurant business that has sustained dining on a certain level,” he told the Manchester Evening News.

He also said that ‘inconsistency might be an issue’ in the city’s restaurants – and he probably has a point.

But he reckons he might be the man to bring a star to the city centre – although a commercially successful restaurant is more important.

‘We didn’t come here with just the goal to get a Michelin star, we came here to establish a successful business,’ he said. ‘If you’re obsessed with one above the other, that’s going to land you in trouble.’

Farewell to the Friday Food Fight – the street food, booze and beats events ended its 12 week run at Upper Campfield Market last week, and proved that Mancunians have well and truly embranced the street food movement.

Friday Food Fight will be back (sort of), in a new guise over the summer, I could tell you where and when but I’d have to kill you, and nobody wants that.

Plus, ILM will no doubt drop the exclusive on you when the time is right.

What worked so well about FFF for me was the mix of operators – dropping Prestwich fine dining restaurant Aumbry into the mix was an inspired move. The venue worked pretty well (after some early ventilation and power issues) but the mix of established food vendors and newcomers was the real hit. Tunes from the Warehouse Project are always likely to help too.

So farewell for now, Friday Food Fight. See you in the summer, maybe at the other end of the city.

We like indies, but it’s important to remember that the big boys can be very important too. So it was heartening to see JW Lees reveal plans to create 1,000 jobs across 65 new pubs in the next five years.

A turnover of £62.8m in the last financial year is not to be sniffed at and Lees is one of the more progressive of the larger breweries.

For example, the brewer is planning a profit share scheme for its 1,100 staff. Nice. The benefits of a more engaged staff are obvious for the business, but how many of those staff might be motivated to work harder, learn and earn more than start their own independent pub?

After a few years of turmoil, it’s good to see some of the more forward thinking industry players support the pub sector from within rather than complaining about their decline.

A solid family business with roots firmly in Manchester and the north west – good luck to them.

PR stunt of the week goes to whoever is working on Gary Neville and Ryan Giggs’ Hotel Football opposite Old Trafford.

The Class of ’92 turned up for ‘a kickabout with the construction workers on site’ last week. What a timely way to keep the hotel in the news, as well as flagging the investment in the scheme from Nicky Butt, Phil Neville and Paul Scholes. Top marks.