Meet Sophie Willan the voice of Channel 4’s The Circle 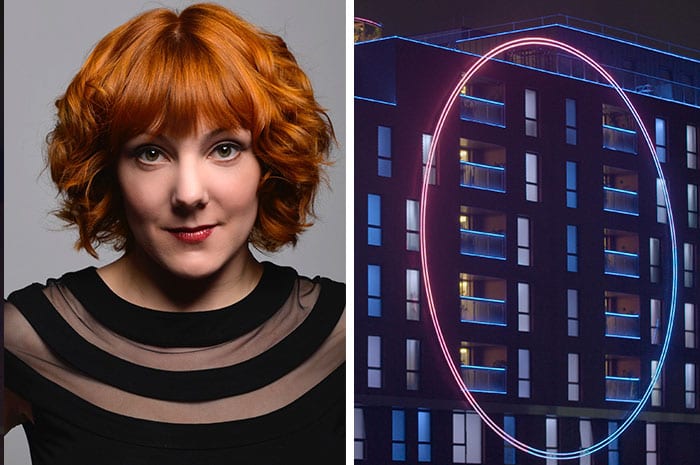 Sophie Willan may be the voice of Channel 4’s The Circle but there’s very little about the contestants’ solitary set-up that appeals to the comedian.

“I just wouldn’t go in it; I’d be too claustrophobic. I’d get cabin fever stuck in a little room with no contact with the outside world,” says Sophie.

Her Bolton vowels have become synonymous with the show, which moved from London to Salford when it returned in September. “It’s fabulous for me. Five minutes home in an Uber. I can’t complain.”

When Sophie was first approached about the show, she wasn’t bowled over by the premise.

“I thought it was madness,” admits Sophie, who works with writer Lee Gant on the scripts (“we don’t so much argue as zone each other out,” she says of their working relationship).

But she didn’t voice her early concerns. “I was like, ‘How much? Fantastic’. It took me a while to think how they were going to make this work and they have. It’s fantastic,” she continues.

The contestants on The Circle are holed-up in separate apartments, and the only interaction they have with each other is through the voice-activated system known as the ‘circle’.

Some of them are being themselves, while others are pretending to be someone else, but they’re all trying to win the £100,000 cash prize by being voted the most popular.

“All reality TV is quite appealing because we’re obsessed with peeling back the curtain and watching people, and then you’ve also got the social media element. You’re thinking about your own relationships on social media, how the world is changing, and how we’re communicating. It just feels very current,” says Sophie, who feels “really passionate” about the fact it’s being filmed on home turf.

“It’s got all the shots of Manchester and a really strong identity now,” says the comedian whose first experience of the limelight was in Ibiza, at the age of eight, when she visited the party island with her gran.

“She’d got divorced and really wanted to go, so I joined the hotel drama club and grandma went off clubbing. I played the crying clown. It was my first role and it’s gone on from there,” says Sophie.

“When I was little, I used to watch Alan Bennett’s Talking Heads, and I’d write my own versions of those monologues. They seem quite old fashioned now, but at the time I thought they were brilliant with these interesting characters and that line between funny and sad. Human behaviour, I suppose.”

Sophie focused on the theatre in her twenties, but after writing a script for the BBC it was suggested she did stand up “to boost my profile”.

“I just felt my voiced fitted more with stand up than it ever did in theatre. The Lancashire rhythm, the way we communicate, and I come from a naturally funny family. We’re all genetically ridiculous, so I think that helps.”

It’s why she’s never felt palpitations at the thought of taking the mic on a comedy night.

“Obviously, you always get nervous doing your first thing, but never nervous where I felt like I couldn’t take on a challenge. I always felt really up for it,” says Sophie who started her stand-up career in Manchester, taking part in the annual Woman in Comedy Festival (which is currently running until October 13), and the Laughing Cows Comedy founded by Hazel O’Keefe.

“She really champions women in comedy and is just really supportive of acts coming through,” says Sophie, who also mentors.

“Some people do feel threatened by new talent and I always think that’s ridiculous. If you feel confident with what you’re doing, the more talented people that come up around you, the better the industry and the more exciting the work and collaborations you’ll do,” says Sophie.

She took her debut stand up show, On Record, about her experiences in the care system, to the Edinburgh Fringe Festival in 2016. A year later, she returned with a new show, Branded, which was also met with great acclaim.

Nothing is off limits in her routines. Feminism, northern sensibilities, labels, her experiences as an escort and her mother’s heroin addiction are all explored.

After Edinburgh, she applied and won the inaugural Caroline Aherne Bursary, a scheme set up in honour of the late creator of The Royle Family to help fund projects from new writer/performers.

“It’s so important to have lots of different voices and different stories, because everyone identifies with different people, and I suppose, for me, it was Caroline and Victoria Wood and Julie Walters, people like that,” says Sophie.

In recent years, there has been a lot of discussion about women in comedy, and the best way to support them in what’s been a male-dominated industry.

“It’s a funny one because I think you can be tricked that it’s better than it really is. Like when I went to Melbourne Comedy Festival, where they take most of the successful comedians in the UK, I was shocked by how many of them had been to Eton, so there’s a class issue as well,” says Sophie, was asked to talk about diversity at the BBC a few years ago.

“It’s alright talking about diversity in terms of what programmes to put on TV but really it’s the gatekeepers who need to be more diverse, the commissioners, the producers, they’ll be the ones that go out and find the things they relate to.

“I was lucky I happened to bump into a producer, Rebecca Papworth, who gave me my first script commission because she probably related to me. She thought, ‘I know you, I know your world, I know what we could do’.”

Having recently been a regular on Channel 4’s The Tez Show, in February Sophie begins production on Alma’s Not Normal, a BBC Two sitcom she’s written and stars in, which will be filmed in Bolton and Salford.

“It’s about a young woman from an eccentric family, the mother’s a heroin addict, so it’s really semi-autobiographical, and lots of my own life taps into it,” reveals Sophie.

“I think it’s good to own your own experiences, but I’m using my experiences to look at a wider landscape of issues, to make them funny, and also make people understand where you’re coming from. It’s important for people to feel they can relate, and to open up that conversation.”

The Circle continues on Channel 4.