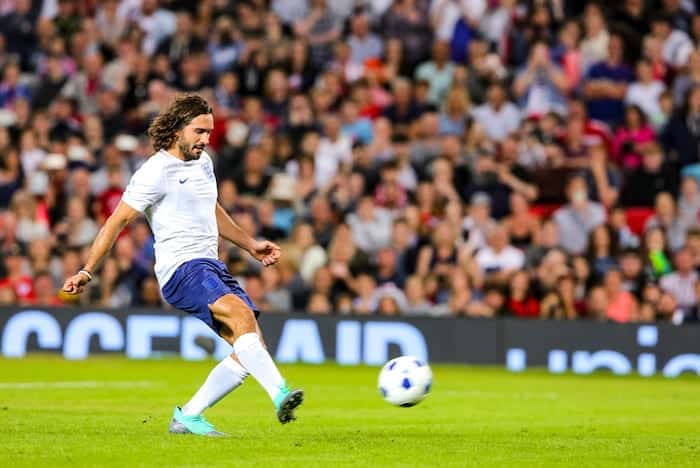 All star charity football match Soccer Aid is heading back to Manchester this weekend – with two teams of celebrities and sports legends preparing to do footballing battle at Old Trafford.

And this year’s Soccer Aid for Unicef event will also see former Manchester United star Wayne Rooney returning to the Theatre of Dreams, this time as a manager.

Wayne will be managing the England team of celebrities and footballing legends alongside Sam Allardyce and Bradley Walsh, and will be hoping to score a victory over a World XI of all stars led out by Harry Redknapp and another United great – Bryan Robson.

Sadly, for the 2020 match, crowds won’t be able to attend as in past years due to the ongoing lockdown restrictions in the UK, so it will be played behind closed doors.  But the match will all be screened live on primetime TV on Sunday night and will aim to add millions more to the £38million raised for Unicef since Soccer Aid first began in 2006.

Here’s everything you need to know ahead of the big game, billed the “world’s biggest celebrity football match”, including the latest news on which stars are taking part.

When is Soccer Aid kicking off and where can I watch?

The Soccer Aid match will be aired live exclusively on ITV1 and STV on Sunday 6th September, with pre-match build up starting from 6.30pm, and kick off expected at around 7.30pm. The TV programme is scheduled to continue until 10pm.

Who is playing in the England team?

Lockdown hero Joe Wicks has confirmed he will be playing for the England team this year, while Kelly Smith MBE – who was capped over 100 times for England – is playing for the first time alongside former United ladies star Casey Stoney. They will be joined by England goalkeeper David James alongside the likes of former United and England stars Michael Owen, Wes Brown and Andy Cole.

Who is playing in the World team?

Comedian Jason Manford, from Stockport, rapper Santan Dave and Manchester United legend Patrice Evra are all due to make their Soccer Aid World XI debuts this year. They are set to be joined by Love Island star Kem Cetinay, who scored a wonder goal in the 2019 Soccer Aid match held at Stamford Bridge, and comedian Mo Gilligan.

Who is presenting the match?

ITV favourites Dermot O’Leary and Kirsty Gallacher will be back to host the match once again.

Dermot said: “I’m thrilled to be back hosting this year’s Soccer Aid for Unicef match.  It’s always a pleasure to be involved in such a great cause. It will be a little different this year with no crowds in the stadium but fans can still tune in on ITV and hopefully we’ll raise even more money to improve children’s lives around the world.

“It’s also going to be a whole lot of fun and hopefully bring a little light relief in these strange times.”