Walking with The Snowman, the festive sculpture trail taking place around MediaCityUK, is soon coming to an end. But fans can take the magic home – and raise money for charity at the same time.

Part of the 40th anniversary celebrations of Raymond Briggs’ heart-warming tale The Snowman, the trail, which runs until 6th January, features 12 giant, beautifully decorated Snowman sculptures each inspired by the song The Twelve Days of Christmas.

Each sculpture has been designed and decorated by professional artists, all of whom painted a Bee for this year’s Bee in the City event.

If you’d like to bid, you can visit your favourite Snowman on the trail before the auction closes on Thursday 10th January 2019. At the end of the event, sculptures will make their way to their forever homes with successful bidders. 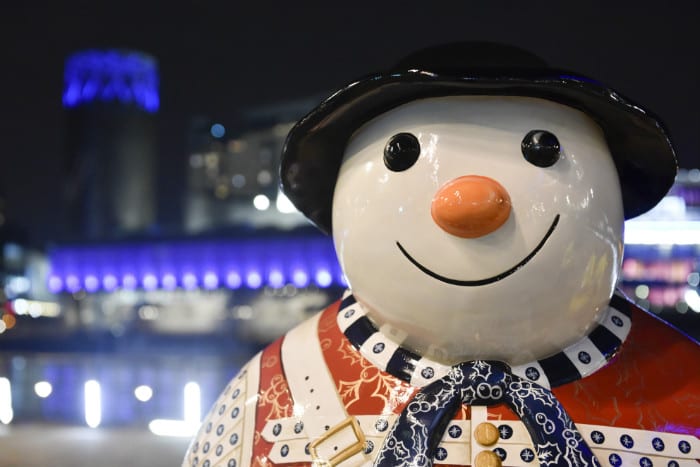 Event organisers Wild in Art hope to raise £30,000 for BBC Children in Need, which makes a real difference to the lives of children across the UK.

“Our beautiful Snowmen will make really special gifts that keep on giving,” says Ben Reed, head of creative development at Wild in Art.

“Judging by the love that the Snowmen have already seen from visitors to the trail, we hope that the online charity auction will be popular and will help us to raise vital funds for BBC Children in Need.

“With themes of friendship, imagination and adventure, The Snowman is the ultimate Christmas story to explore with family and friends. And with twelve sculptures all themed on The Twelve Days of Christmas, it really doesn’t get any more Christmassy!”

The Snowman was created and illustrated by Raymond Briggs as a picture book, narrated entirely through hand-drawn illustrations, and was first published in 1978. Now one of the world’s most popular picture books, The Snowman has sold over 5.5 million copies globally and has been translated into 15 languages.

The Snowman sculpture designs are by both established and emerging artists.

Jodie Silverman created the first sculpture on the trail, the Partridge in a Pear Tree, while tattoo artist Megan Heather Evans used a simple colour palette to create a striking image which shows the love and friendship of Two Turtle Doves.

Salford-born Laura-Kate Chapman created a repeating, stylised pattern for Seven Swans a-Swimming, while mural artist Donna Newman responded in a fun way to the verse Eight Maids a-Milking by transforming The Snowman into a giant cow.

Lizzie Rose Chapman covered her sculpture in a beautiful Christmas landscape for Nine Ladies Dancing. Ten fictional members of the House of Lords in their red and white peerage robes leap across the sculpture Ten Lords a-Leaping by Manchester illustrator and mural painter Hammo.

Local children and young people from more than 40 schools also took part in the event by decorating their own smaller Snowman sculptures as part of a programme supported by Salford City Council.

The little Snowmen are displayed inside the Lowry Outlet, The Lowry and the Open Centre until 13th January 2019 – slightly later than the main trail. They will be returned to the schools that created them as a lasting legacy, and are not available to buy at auction.

The Walking with The Snowman auction is open until Thursday 10th January 2019, with bids starting from £500.