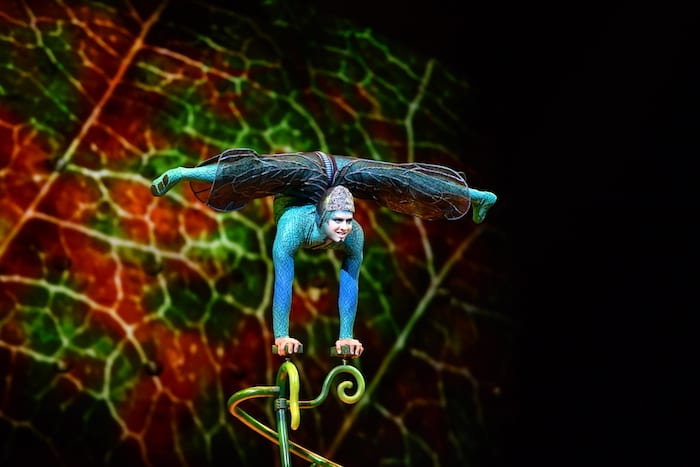 Even if you’ve never watched an entire Cirque du Soleil show, chances are you’ll have seen snippets on television or at least heard of the world-class acrobats and performers who’ve wowed over 160 million spectators since it was formed in 1984.

Created by a group of 20 street performers in Baie-Saint-Paul, a small town near Quebec City in Canada, the company now boasts 4,000 employees, including 1300 artists from more than 50 different countries.

OVO, which premiered in 2009, is one of numerous shows touring or in residency around the globe. It’s just reached the UK for an arena tour that will take in nine cities over the coming months, including Manchester in September.

Meaning “egg” in Portuguese, OVO explores a colourful community of insects as they go about their day-to-day business, working, eating, fighting and looking for love. 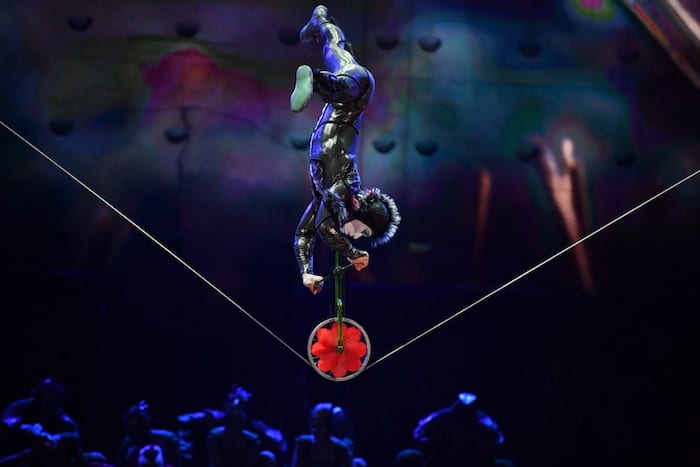 “OVO offers extremely high-level acrobatics and wide-eyed, jaw-dropping events, as well as highly imaginative costumes and make-up, so you walk into an arena and you’re transported to another world,” says Tim.

“That’s the same with every Cirque show but with OVO, the tone’s a little different. Instead of being dark and mysterious, it’s bright, playful, energetic, fast-moving and silly.”

It’s a hive of industry inside the arena, where technicians, performers, show managers, coaches, caterers and costumiers are busying themselves just hours before curtain-up.

The international cast comprises over 50 artists and preparation is carried out with military precision. Each act is allotted a specific amount of time on stage to practise and hone their segment each day.

Right now, it’s the turn of Canadian Catherine Audy who specialises in aerial straps. She portrays one of two butterflies that beautifully swoop across the stage while performing meticulously controlled manoeuvres and contortions.

Catherine would normally be rehearsing with her long-term partner Alexis Trudel, but today she’s practising a solo performance. It’s one of the show’s many contingency plans that are necessary when you have a cast that’s susceptible to injury and accidents.

“Something happens in every show,” admits Tim, who has over 30 years’ experience as a performer, director and choreographer.

“Safety’s our first priority so big things don’t happen, or it’s rare. But little things will happen all the time.” 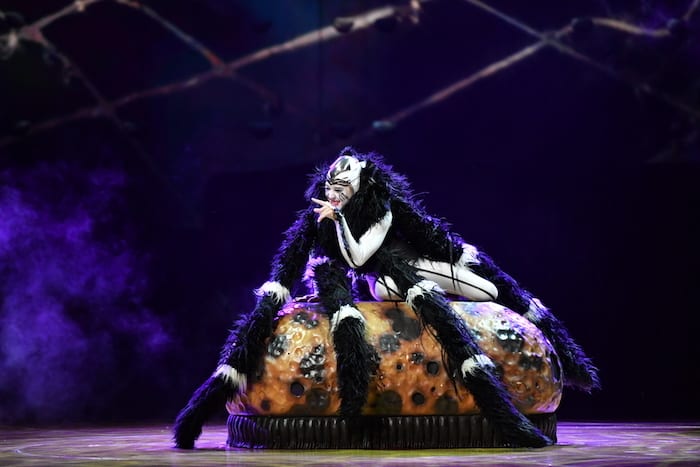 He’s been part of OVO for two years and has “probably seen 600” of the 800 shows during this time.

“I have to step out and not watch a number of the shows, so I can approach it again fresh,” he reveals.

“As artistic director, I’m responsible for keeping a high level of artistic content and keeping the show as bright and shiny and exciting as it was the day that it opened.”

He admits he’s strict, “but at the same time it needs to be a collaborative effort because everybody here is so good at what they do,” he observes.

“I don’t think I drive or dictate the show. I see myself more as captain of the ship and helping and supporting everybody do their jobs to their best.”

Once Catherine’s left, the show’s ‘crickets’ take their turn, practising their act on the huge 64ft wall that dominates the back of the stage.

These incredibly fit blokes jump 30ft to a trampoline below and then literally walk up the wall on their way back to the summit. They make it look effortless and it’s mesmerising to watch.

Directly behind the stage is a mass of computer screens overseen by technicians, and beyond that a dimly-lit backstage area filled with props, a mobile gym and a television screen where the artists gather for a live feed during the show and watch playbacks of their performance during rehearsal sessions. 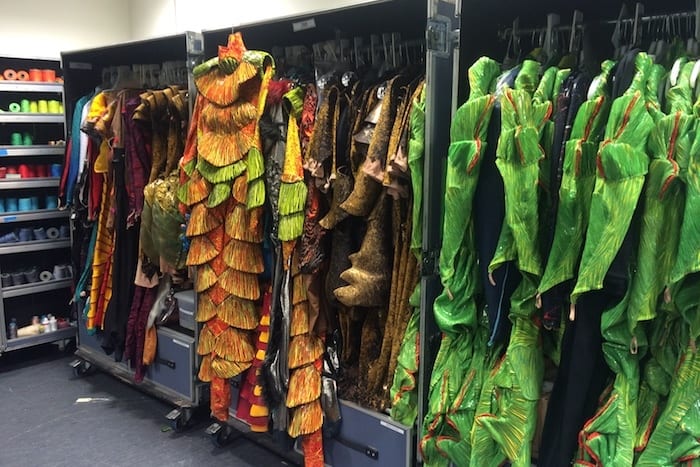 There’s also rail upon rail of insect costumes inspired by futuristic superheroes and suits of armour from through the ages.

The outfits are made in Montreal but maintained on the road and the wardrobe team travels with over 1000 pieces of costume, washing each outfit after each performance and checking for any tears and rips.

If acts don’t require a full stage set-up to practise, they’ll rehearse here, like one of the show’s four ‘spiders’ who’s currently walking along a slackwire before casually lifting himself onto a unicycle and wheeling himself along the rope using his hands.

Next to him the ‘ants’ are rehearsing their synchronised foot juggling using giant-sized slices of kiwi, corn and aubergine and sporadically using their legs to propel each other into the air.

The performance requires concentration, but the definition of trust is back out front where the Russian cradle is now being performed by the production’s ‘scarabs’. 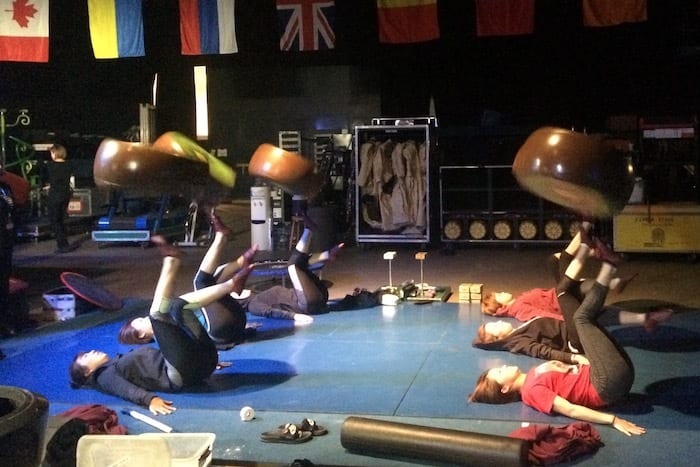 Soaring high above the stage, some of the group hang from a platform by their knees, while swinging and tossing aerialists known as ‘flyers’ to ‘catchers’ positioned six metres away.

Back on terra firma, Alanna Baker, who’s been part of Cirque du Soleil for six years, admits it never feels like she’s working.

“I could sit and watch the show and never get bored,” she says.

A gymnast all her life, Alanna competed for Great Britain and took part in a closed audition for Cirque du Soleil as her career drew to a close.

After training in Montreal, she joined OVO in Australia as a flea before becoming the Black Spider.

“Basically, I’m on stage the majority of the time, supporting other acts, doing dance, acrobatics, aerial. I climb across the wall with the crickets. I love it,” she says.

“OVO’s so different from all the other shows. It’s full of acrobatics, projections, music. It’s amazing and the kids love it.”

Big kids, too. As Tim remarks, “If nothing else, if people leave the venue having forgotten their lives and their troubles for two and a half hours, I think we’ve accomplished a huge thing.”

OVO will be at Manchester Arena 26th-30th September.