Six by Nico launches new tasting menu inspired by Hollywood – what’s it like?

Spring Gardens restaurant Six by Nico has launched a new six-course tasting menu – and it’s all about celebrating the glitz and glamour of Hollywood.

From Shrek to The Godfather, Pulp Fiction to Ghostbusters, each course has been created in tribute to a classic movie.

We start with an aperitif, a special ‘Tequila Mockingbird’ cocktail created by Everyman Cinemas as part of a new partnership with Six by Nico. 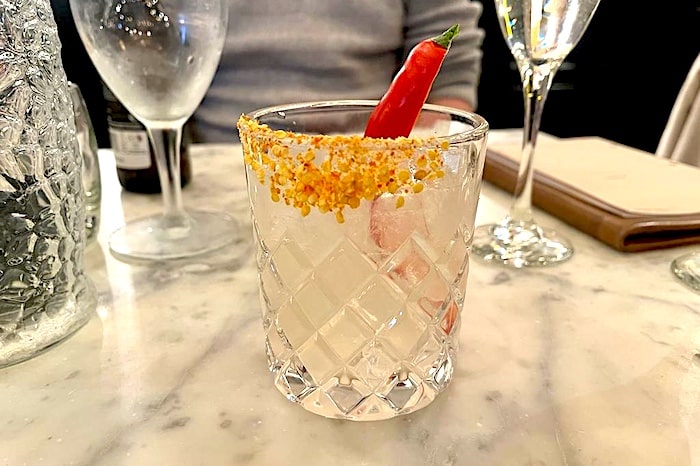 The spicy margarita, made with 1800 Tequila, sharp lime, and hot red chilli with a chilli salt rim, certainly packs a punch.

A selection of snacks, called “Good Morning Vietnam”, consists of delicate prawn and peanut rice paper rolls, a crab and shrimp cracker with pickled melon and lime, and a bowl of fragrant hot and sour pork pho. 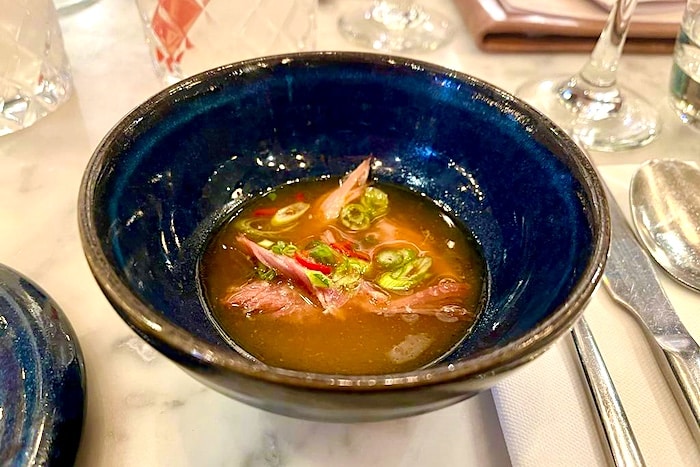 The first course of the six is called “Run, run, run as fast as you can” and is inspired by Shrek.

It consists of a light duck liver mousseline, julienne strips and puree of Granny Smith apple, and a crisp gingerbread man. 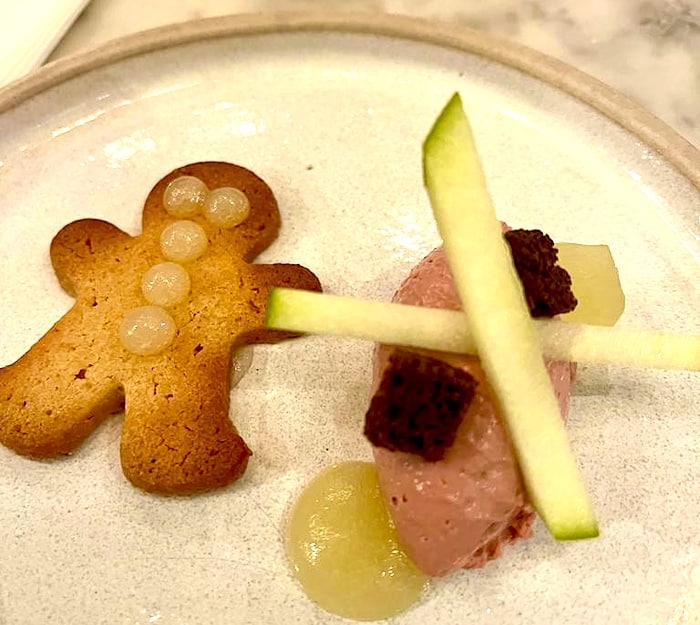 “Leave the gun, take the cannoli” is of course inspired by The Godfather.

A ballotine of chicken sees the soft, succulent meat topped with a royale cannoli with confit yolk, smoked leek, meaty hen of the woods mushroom, and a clear chicken broth poured over. 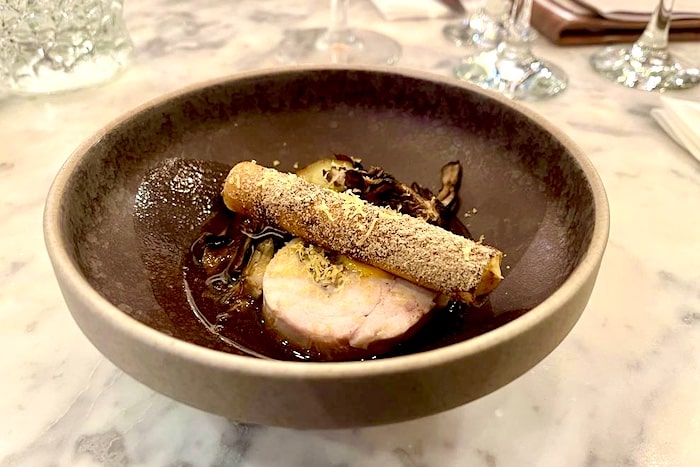 The paired wine – “Gone with the wine” – is a Sauvignon Blanc from Côtes du Marmandais, a ‘satellite’ district of the Bordeaux wine region of southwest France, light, citrussy and grassy on the palate with notes of honey and mango.

“Vincent Vega’s ultimate burger”, inspired by the Tarantino classic Pulp Fiction, is not a burger at all.

Rather, it’s a steak tartare made with onglet, but thanks to the addition of burger sauce, tomato, aged cheese and crispy potato, it cleverly manages to incorporate the flavours of a ‘royale with cheese’. 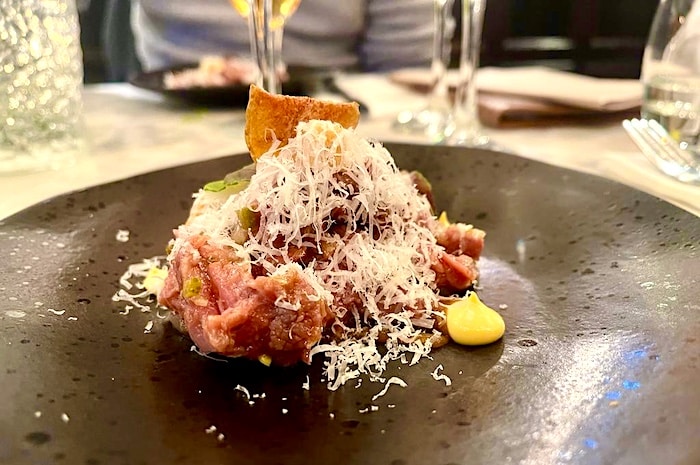 The wine match is “The sound of Merlot” (Comte Tolosan IGP Terra Vallona), slightly sweet with notes of strawberries and candyfloss, while citrussy enough on the palate to pair well with the cheese.

“The curse of the black pearl” is next, a dish inspired by Pirates of the Caribbean.

It consists of a meaty fillet of cod with sweet, intensely flavoured confit tomatoes, a seaweed and potato terrine and smoked roe.

There’s also a visually striking dish of cod mousseline topped with jet black squid ink, on a bed of samphire and seaweed. 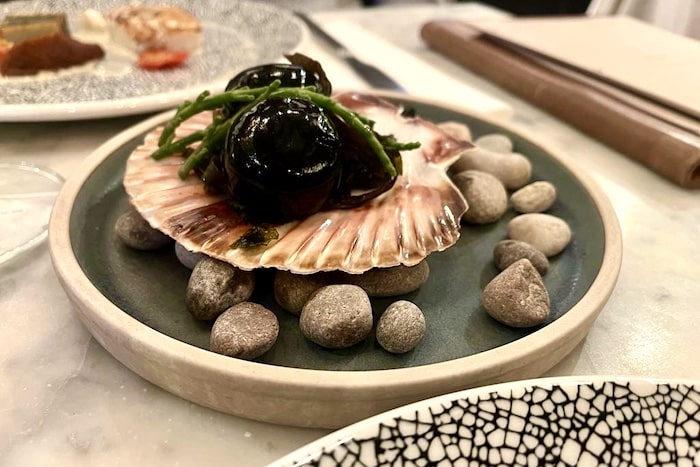 The puntastically named “Honey, I drunk the kids” is the wine match, a blend of Merlot, Cabernet Sauvignon and Cabernet Franc from southwest France, medium bodied with light tannins.

“What’s your favourite scary movie?” is inspired by Scream, and it’s another striking dish. 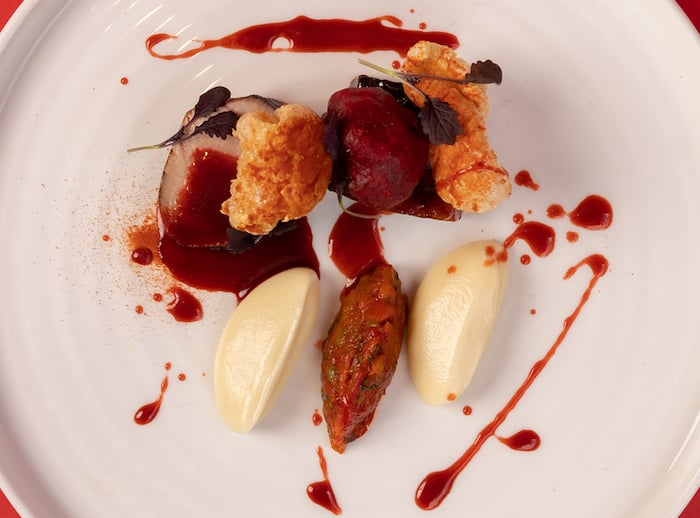 “The good, the Bordeaux and the ugly” wine match is another blend of Merlot, Cabernet Sauvignon and Cabernet Franc, this time smoky and oaky on the nose with notes of dark chocolate and fig jam.

“Who ya gonna call?”, the final dish, is a dessert inspired by Ghostbusters.

The sweet strawberry, lemon and pistachio mille feuille and flamed meringue with strawberry sorbet are topped with a strawberry tuille version of the film’s logo, a nice touch. 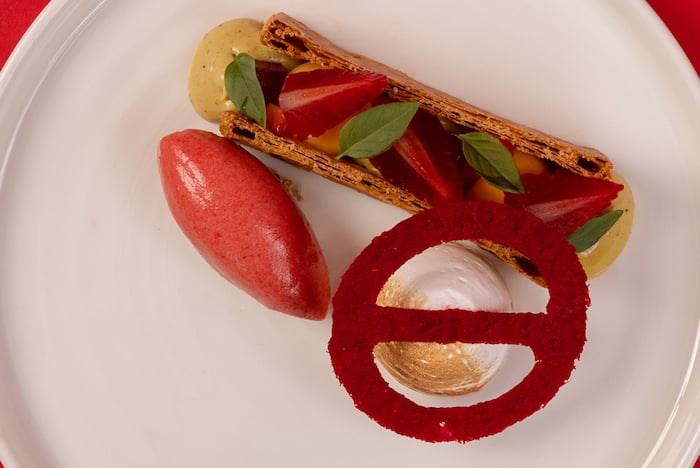 “The fifth element” wine pairing uses the two signature white grapes of Côtes de Gascogne, sweet and creamy with a hint of honey and pineapple.

In all, it’s a fun menu, and every dish is creative, clever and well crafted.

Make sure you get a front row seat.

Running until Sunday 5th June at Six by Nico Manchester, the six-course Hollywood menu is priced at £37 per person, with an optional wine pairing for £30. There is a vegetarian alternative available for every course. Click here to find out more and book.