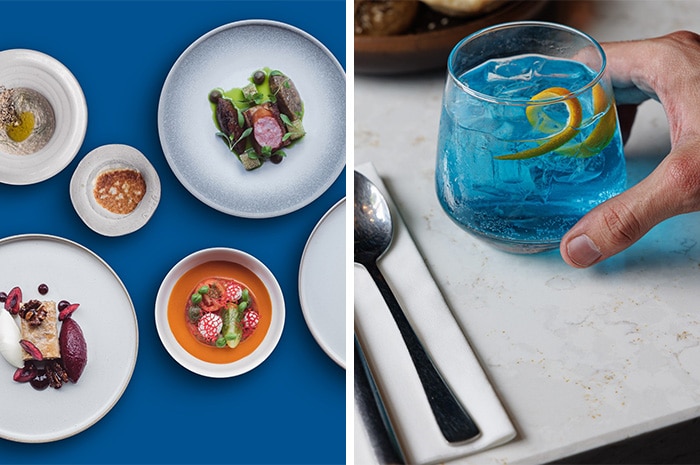 What remains the same is their offer – six courses for the set price of £37. The standard of cooking is consistently high, changing the menu keeps things interesting for guests and it’s ideal for anyone who thinks tasting menus can be a little intimidating.

The latest theme at Six By Nico Manchester is ‘Greece’, and it runs between Monday 29th August and until Sunday 9th October. Only this time, they have also launched an entirely vegan alternative tasting menu too. We thought we’d order one, er ‘normal’ menu (what do you call a non-vegan menu?) and one vegan menu to compare – and we were pleasantly surprised. 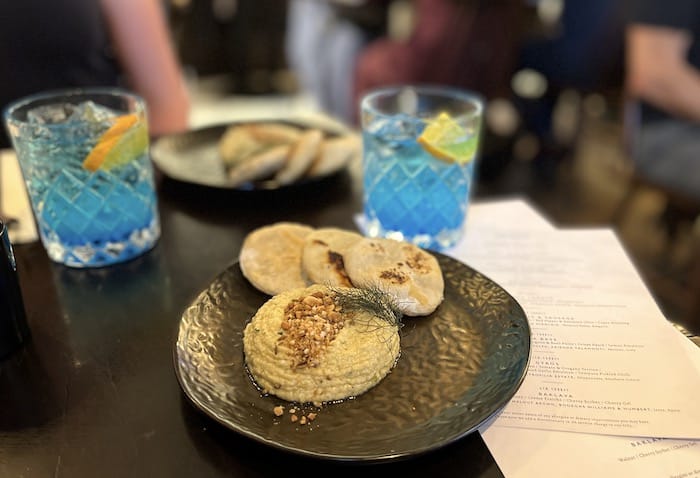 Six by Nico always offer a themed cocktail (£7.50) and this month it’s Kuavó (Kyanó) with ouzo (of course), orange liqueur, lemon and orange essence. Squint at the glass and you could be fooled into thinking you’re staring at the sun over the Aegean Sea. 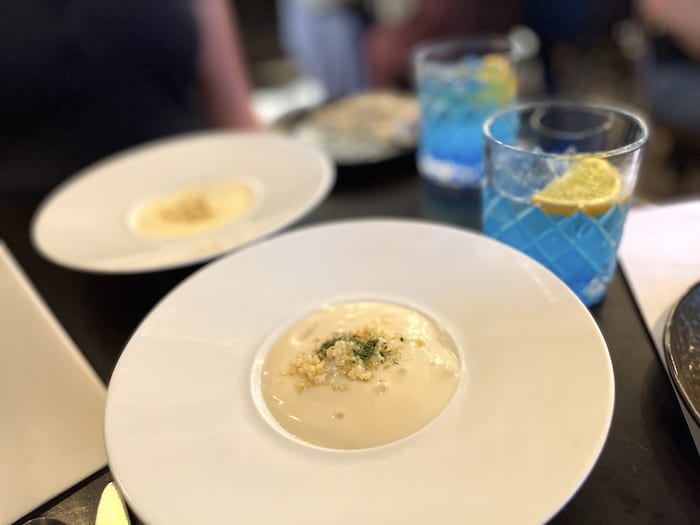 First course was a refined take on the usually hearty moussaka. Meat eaters can enjoy four or so mouthfuls of lamb ragu and pickled aubergine, topped with a light Kefalotyri cheese espuma and a potato tuille. The vegan version looked almost the same, but the lambless base was aubergine and tomato ragu and the light potato foam came without cheese.

‘Greek tomato’ was next. A fresh riff on gazpacho with colourful compressed heritage tomatoes decorated with edible flowers and a lacy red tuille biscuit – a vegan substitute filled in for the spots of whipped feta. 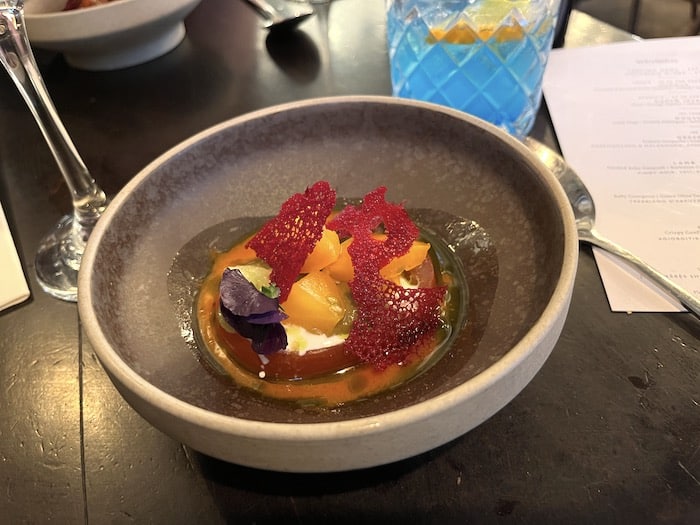 Course three is ‘lamb belly and sausage’ (or a perfectly charred half baby aubergine for vegans) and it comes with a smoked baba ganoush, barbecued cucumber, red pepper and Kalamata olive and caper dressing. It’s at this point it becomes obvious that plant-based food doesn’t mean bland taste food.

Course four is sea bass with baby courgette, green olive tapenade, courgette and basil puree, crispy squid and lemon emulsion. A lightly battered and stuffed baby courgette made an excellent substitution for the fish in the vegan version – and it was arguably better-looking too. I was starting to enjoy my vegan vacation. 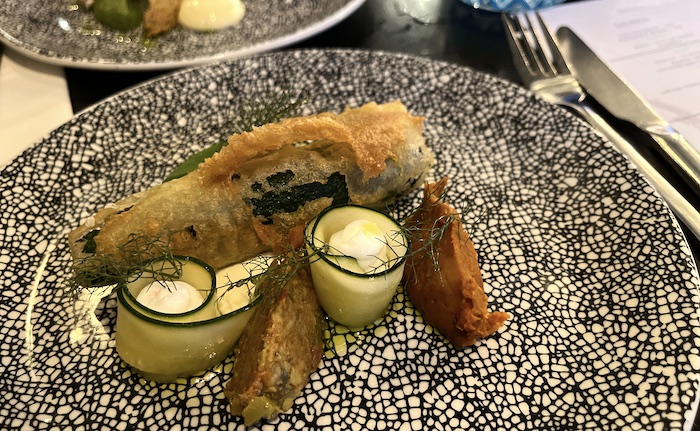 For the fifth course, meat eaters are treated to a gyro – but don’t expect the stuffed-to-bursting conical creation you could pick up on many a street corner – especially after four previous courses. Six By Nico’s version is a marinated cube of chicken breast with tomato and oregano terrine, crispy confit potato, roast garlic emulsion and tempura pickled chilli.

The vegan alternative doesn’t mimic, instead it’s a meat-free standalone dish of roast cauliflower ‘steak’ perked up with green harissa, cauliflower puree and couscous and preserved lemon. A perfect plant-based plate with sweetness coming from the roast cauli, balanced by a delicate sourness from vinegar and citrus. 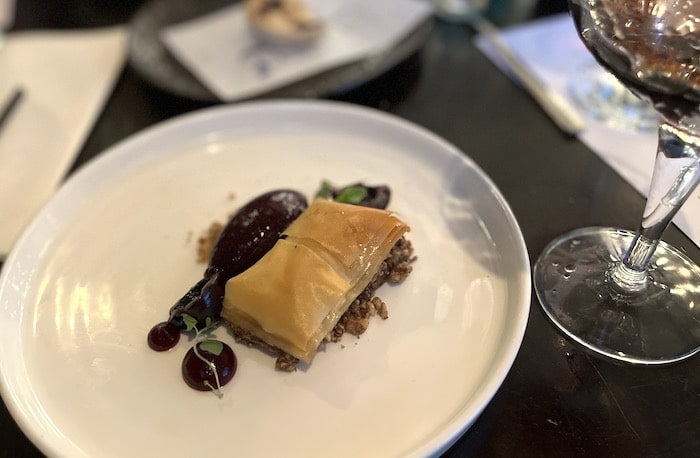 For dessert, well, it couldn’t be anything other than baklava. Here the honeyed layers of baked filo pastry have been packed with cinnamon and walnuts and paired with cherry sorbet and gel. The only difference for non-vegans is the addition of a little crème fraiche.

As well as changing their entire food concept every 42 days, Six by Nico also offers a new matching wine flight for an additional £30. This time it included a couple of Southern Greek varieties as well as a wine from Bulgaria and one from Italy. They’d wisely matched the dessert course with a dark and sweet sherry. All delicious, interesting and perfectly matched.

Staff are well drilled and, despite there being so many elements to each dish – plus an additional vegan menu to learn about – they all seemed to know their onions (and the rest of the ingredients.)

We’d booked at the odd time of 4.45pm on a Friday afternoon and the restaurant was packed with guests, either eating after a day’s shopping, or perhaps lining their stomach before a big night on the town. 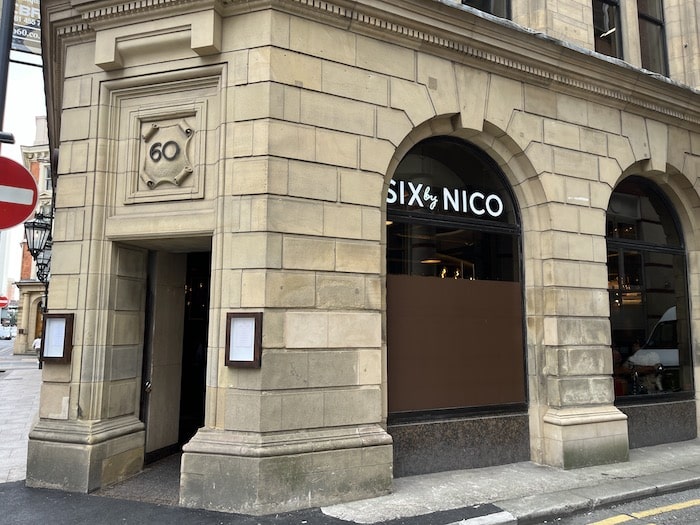 However, this is a business of good food at good prices, which means they don’t encourage guests to hang about. I was still in mid-swallow of the final course when we were told firmly that they needed the table back immediately. And sure enough, on the way back through the restaurant after a quick after-dinner nip to the loo, we noticed that new guests were already sat in our still-warm seats.

Still, their new vegan tasting menu stands up to its meaty counterpart in every way. Plant-based alternatives to lamb, feta cheese, sea bass and chicken included smoky aubergine and punchy flavours including olives, pickles, fruity emulsions and purees, meaning that we never felt as though we were compromising or going without. If you know any vegans (and you will because they’ll have definitely mentioned it…) tell them about Six By Nico and you’ll definitely be awarded (vegan) brownie points.