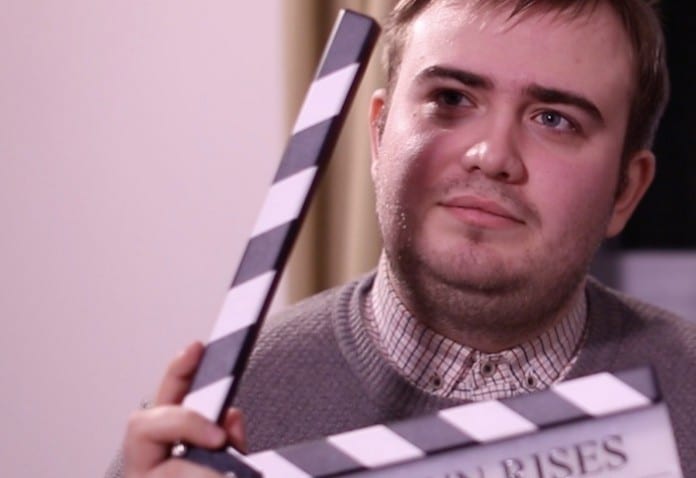 We’ve grown accustomed to seeing film crews on the streets of Manchester.

We’ve seen city landmarks and locations on TV in hit series Cold Feet, Shameless, Cucumber and Queer as Folk. And Manchester has doubled for New York in Hollywood films including Alfie and Captain America.

The latest film to be shot here is As The Sun Rises. We caught up with director James Postlethwaite to find out more.

I was out doing some training in Los Angeles, working with some of the studios when I decided I really wanted to work on a LGBT screenplay. It was around the time where I realised who I truly was and wanted to resonate that, maybe out a sense of diminished pride, in my work. I wrote two stories – one about an affair and one about my own experience in coming out about my sexuality. I read them both back on the flight home and realised that there were strange similarities – so I merged them and As The Sun Rises was born.

Can you tell us a bit about the plot?

As The Sun Rises focuses on three characters living in Manchester – Andy, Emma and Sam. Andy is a socially awkward and emotionally unavailable gay character who has been in a relationship for nearly ten years with his partner, Emma. He’s spent the best part of a decade hiding who he is because he’s so frightened about being truthful with those he loves the most. By way of celebration for the upcoming relationship anniversary, the couple head in to town for a romantic meal and it’s here where Andy meets Sam, a gay waiter, who  writes his number on the bottom of Andy’s bill – with dramatic consequences.

What has been the biggest challenge getting the project off the ground?

The biggest challenge so far is financing the project. Britain has a really poor variety of funding options open to independent film-makers and it’s a topic I’ve really tried to get MP’s and the government to take seriously. There’s this common misconception that low budget productions produce average content but it’s simply not true. We could have a fifty million pound budget and the wrong cast – and still not pull it off. Getting the public to buy into an idea is difficult but I think we have a fantastic product and a film that will resonate with so many different demographics, so I’m really hopeful we’ll hit the target.

The film has a low budget. How do you ensure the production values are high?

This one is a toughie but a question I get so often. I have a few secrets, ones that I’m not going to spill, but in all honesty it pretty much boils down to having a really good producer. Our producer, Oli, has got some serious experience under his belt and budgets like no other producer that I’ve worked with.

Do you feel that gay representation has moved on in film and TV?

I think we’re getting there but I don’t think our work is done. I’ve done a lot of interviews recently and people are of the perception that the LGBT film and television market is widely represented. But in my eyes, it’s not the case. Certainly, with film I think things are getting better but I think we’re a bit behind in the TV world. Russell T Davies’ Cucumber, which was also shot in Manchester, is one of more recent LGBT related dramas that springs to mind that received critical acclaim. With the exception of soaps such as Coronation Street, Hollyoaks and Emmerdale that do LGBT-related storylines very well, we very rarely see broadcasters are bold enough to commission dramas that focus solely on LGBT characters or characters of sexual or ethnic minorities.

What are your hopes for the film?

We’re looking to take the film on a festival run both here in the UK and abroad. Starting off with the prestigious BFI Flare and the Fringe. These are Queer film festivals which focus solely on LGBT-related content. We’ll then look to be moving on to local festivals in the Manchester and London areas and then a video-on-demand release to platforms such as iTunes, Amazon, Hulu and potentially on-demand services such as Netflix, Now TV and Amazon Prime.

Which Manchester locations will locals recognise?

I’m a huge fan of Manchester and a bit of a location geek. We started scouting early this year and still have a few places to seek out such as the apartment for lead characters Andy and Emma, and a house for the other lead, Sam. The bulk of our filming will take place in Didsbury and the city centre. Popular landmarks I’m keen to flaunt are Beetham Tower, Albert Square, Spinningfields, Deansgate and of course – the Northern Quarter.

As The Sun Rises will be filmed on location in Manchester later this year. Find out more here.