She Says, He Says Review: A Taste of Honey at Hotel Gotham 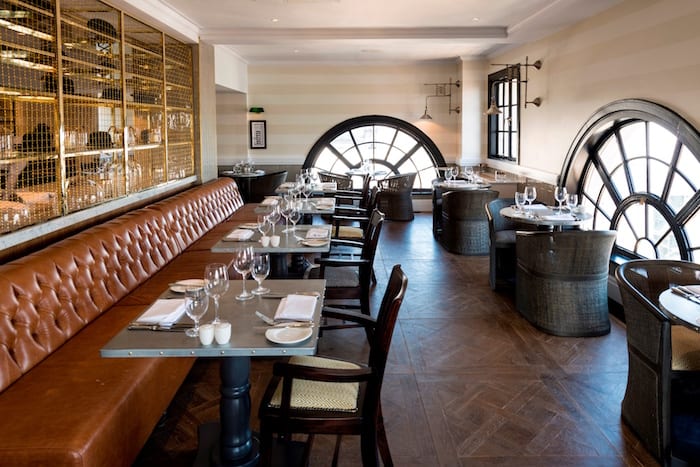 Hotel Gotham has notched up nine awards since it opened last April in the stunning Edwin Lutyens building on Spring Gardens, most recently Best New Hotel in the World at last week’s World Boutique Hotel Awards 2016. It has an occupancy rate of 90% so it’s clearly doing something right.

Whilst the VIP lounge on the 7th floor, Club Brass (a nod to the fact that the building used to be a bank) is only open to members and guests, the hotel’s restaurant, Honey (another nod), is open to the public. 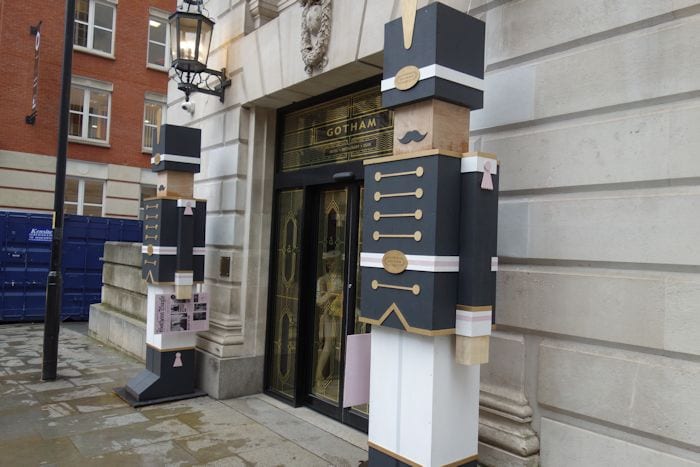 The Hotel Gotham experience began as soon as we walked through the entrance (which is now guarded by two oversized toy soldiers) and were greeted by an immaculately dressed doorman in a bowler hat. It felt a little larger than life, as if we had walked onto the set of one of those classic Hollywood films. Waiting for the lift to take us up to the 6th floor restaurant, we half expected a Marilyn Monroe lookalike wearing a fur stole to step out or at least a bellhop wearing one of those classic American-style uniforms.

The glimpses we got of the hotel on the way up to the restaurant suggest this is a very special place indeed, and when we arrived we were not disappointed. It’s a beautiful space staffed by servers who must be among the most elegantly turned out in Manchester.

We listened to the invisible pianist as we perused the menu and were lucky enough to get a table by one of the windows so we could enjoy the striking views of the rooftops of Manchester city centre, too.

Honey is rhyming slang for money. But is the food on the money? Is it as exquisite as this place looks? Or is it a case of style over substance? 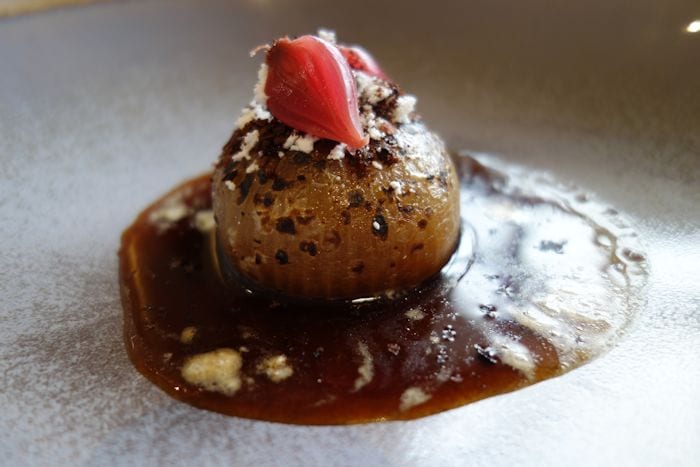 She Says: Not one of my favourite herbs, He ordered this starter which I wanted to like as it looked so intricate on arrival. I had imagined some kind of stuffing concoction as the menu gives little away in terms of what each dish contains. There was in fact no meat component, a well-stewed onion with mushrooms and pine nuts. It was interesting for sure, although it didn’t quite manage to change my thoughts on the herb, and missing a vital ingredient to give it more depth and introduce another dimension.

He Says: I ordered this starter because of the name. I’m a big fan of some nice stuffing on my Sunday roast but it was exactly as described on the menu and not much else and was a little underwhelming. 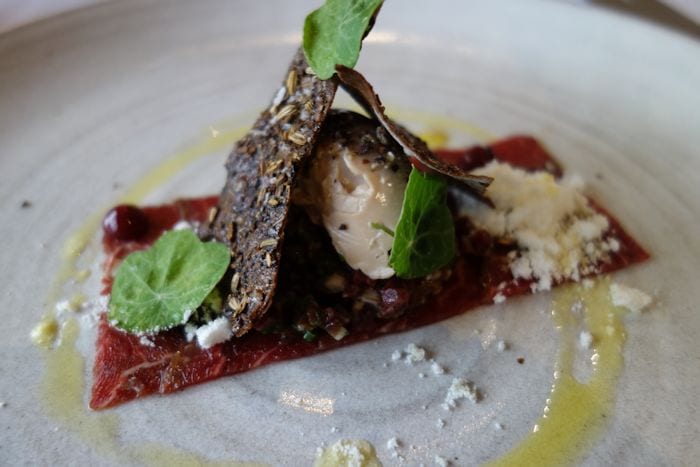 She Says: A stand out dish today, beautifully presented with rich and mind-blowing flavours. The calves liver parfait as decadent as a fois gras and the cured beef so finely cut and elegant. Beer beef fat looked like parmesan but tasted better, and a black crispbread with fennel added superb and much needed texture.

He Says: This is where I question whether I’m qualified to review places like this. I’m no Jay Rayner. I’m not even a Giles Coren. I’m more of a Gregg Wallace, except that I have some hair and I don’t call everybody ‘mate’. A man who either likes things or doesn’t like things. Without wishing to sound like a weapon, my taste buds just couldn’t cope with the unusual combination of flavours in this dish. 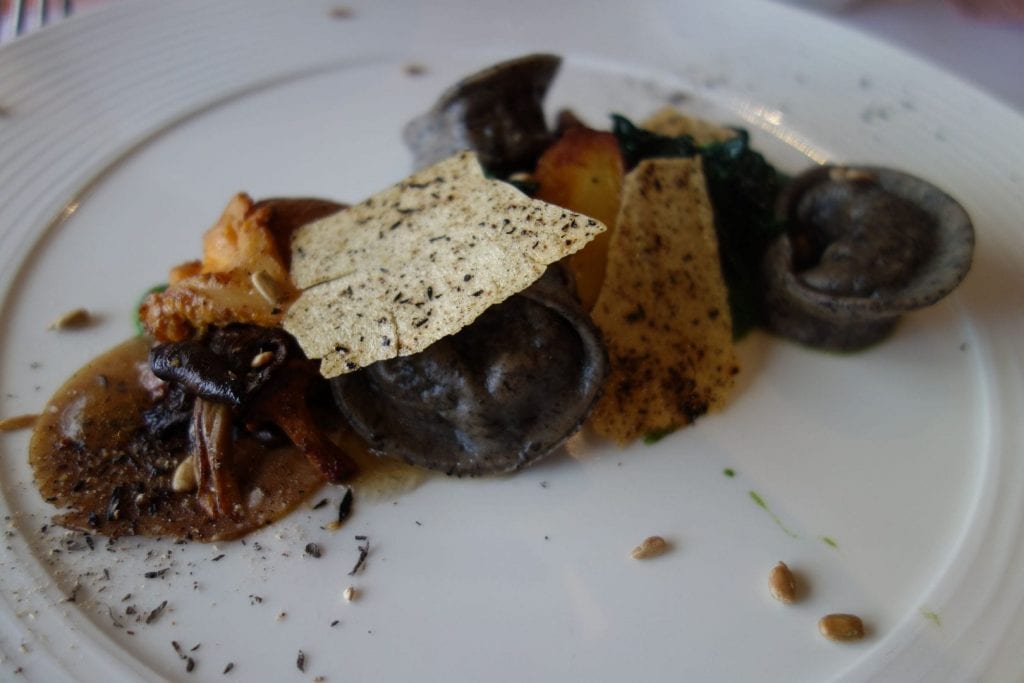 She Says: This main course was a bit hit and miss. The mushroom tortellini wonderfully earthy, but not enough of them. Some gloriously juicy and stocky kale. But the potatoes on the plate not suiting the other components of the dish.

He Says: I’m not a big fan of mushrooms so I wasn’t happy when She ordered this dish, but these fruits of the forest were meaty and full of flavour, a cut above your common or garden funghi. And the chef actually succeeded in making kale taste good. The taste of autumn on a plate. Lovely. 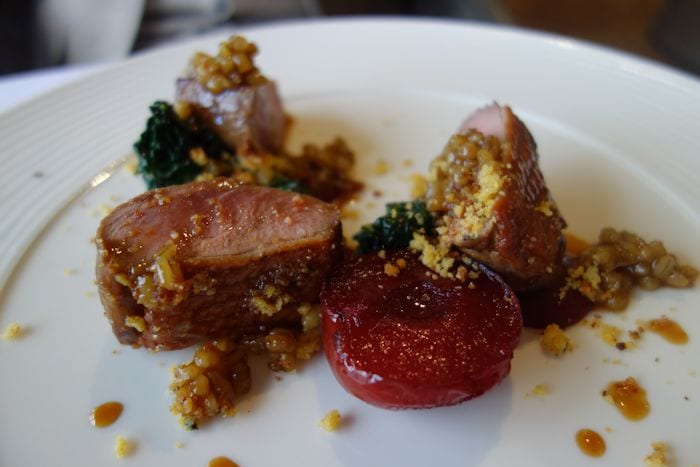 She Says: Easily the better of the two main courses. A very well balanced plate. Duck breast beautifully cooked, not too pink, with some well-crisped skin on. A juicy stewed plum added sweetness and pearl barley, one of my favourite ingredients, giving bite and substance. Rosemary polenta also worked well here.

He Says: Just how duck breast should be. Tender, juicy and full of flavour. My favourite dish so far. 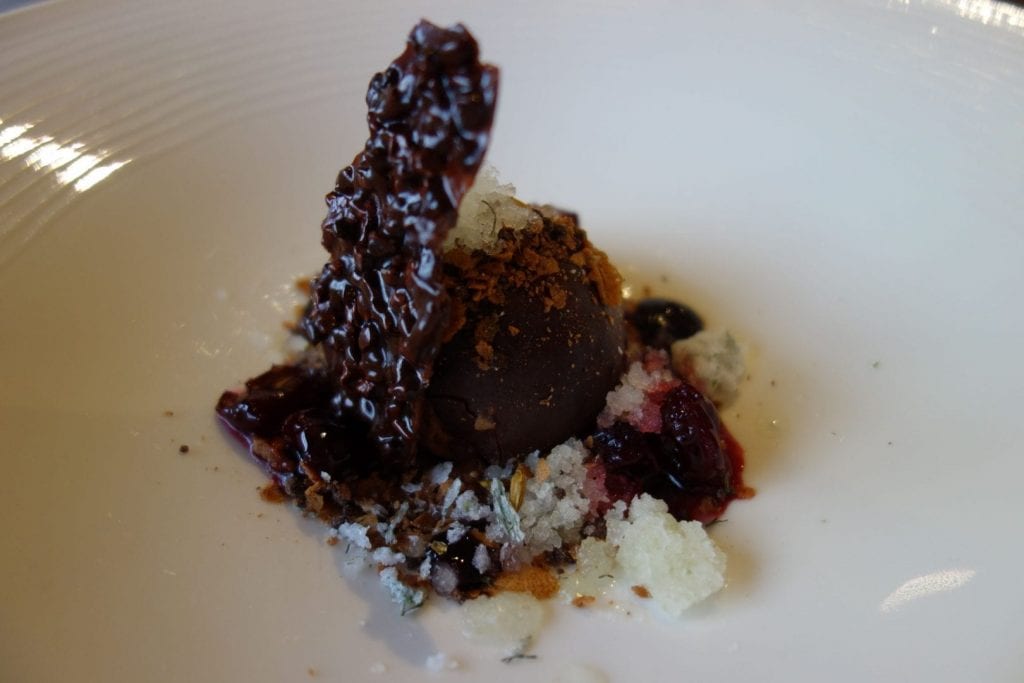 She Says: Not my favourite dessert, unfortunately. Based on a Black Forest gateau, it was far too sweet and jammy for my liking. I do think some guests (like Him) will love it, though.

He Says: Loved it. The classic Black Forest gateau dessert reimagined and taken to a new level. I could have eaten another one. Or maybe two. Or even three. Four at a push. 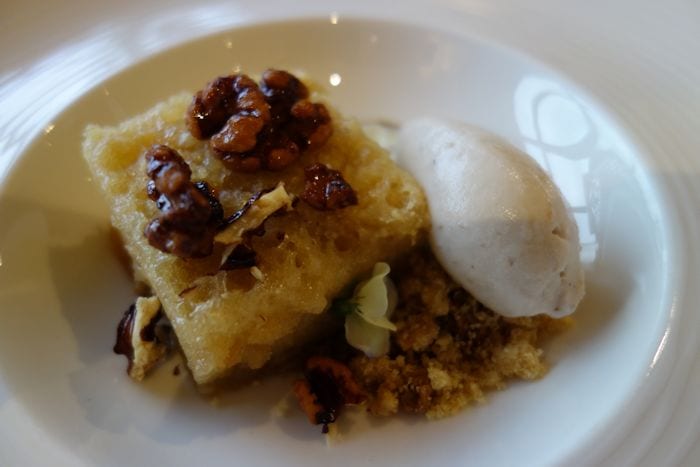 She Says: Wow! This was a triumph of a dessert. Elegant without being too fussy. The sponge was so moist and light, with the subtle flavours of whiskey and honey. Crunch came courtesy of candied walnuts. What I loved so much was that it was a real proper pud with a fine dining edge, and not the other way round. Very Important.

He Says: Another excellent dessert. This time a lovely sponge very apt for this chilly time of year proving that there’s more to whiskey and honey than a remedy for the winter sniffles. 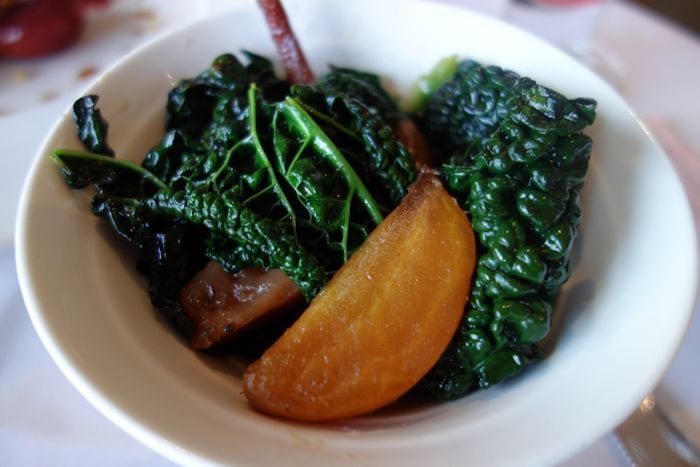 Side orders were suggested by our server so we opted for Nude Skinny Fries (£3.50) which were actually plain old chips under an exotic pseudonym and therefore not as exciting as the name suggested. Seasonal Vegetables (£4.50) were wintery root vegetables mixed with more of that beautifully cooked kale.

Some rather fine wines accompanied our lunch. Short Mile Bay Chardonnay from Australia (£5.50 175ml) a great white to go with our starters whilst the Vina Real Rioja Crianza (£8 175ml) was the perfect accompaniment to the duck.

Every dish looked stunning, suiting the elegant surroundings. Our server Paul was friendly and professional with a style of service perfect for this five star hotel but not too formal. But I do feel that Honey could feel a little more inviting to non-residents. As it stands it is firmly a restaurant within a hotel, whereas if it focused on being a stand-alone destination restaurant then a more relaxed and all-encompassing space would result? Look at what the Refuge boys have achieved. Their ‘Come As You Are’ philosophy would go a long way here.

Just in case we haven’t mentioned it before, everything about the hotel and restaurant is stunning. This place really has got the wow factor – perfect if you’re looking for somewhere special to take a special person or maybe your mum for afternoon tea on her birthday. It has two AA rosettes which are given to ‘excellent restaurants where there is obvious attention to the selection of quality ingredients, which aim for and achieve higher standards and better consistency, and where a greater precision is apparent in the cooking’. Which, appropriately enough, is pretty much right on the money as far as Honey is concerned.