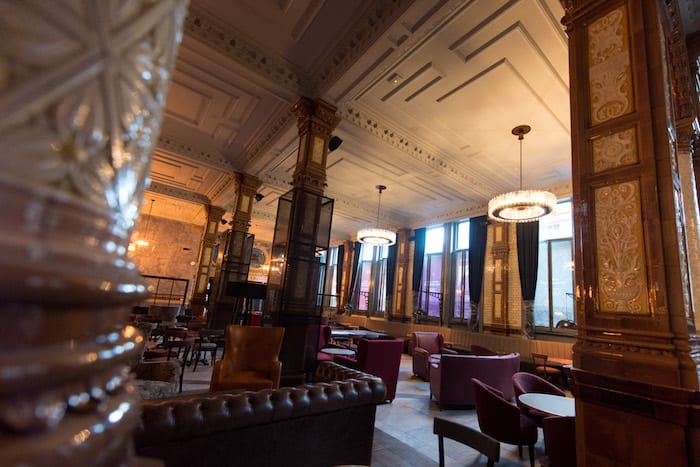 West Didsbury eatery and craft beer bar Volta are bringing a whole new meaning to the phrase ‘stepping up’. The bijou Burton Road restaurant are now the official curators of The Refuge, an opulent and iconic space inside The Palace Hotel.

The 10,000 square foot area will be open for everything from afternoon tea, brunch, private dining, casual coffees as well as operating an 40ft granite bar with 18 craft beer taps.

To put this all into perspective, the entire Volta Didsbury could fit into The Refuge’s ‘Winter Garden’ aka Afternoon Tea room. It’s a huge undertaking for Luke and Justin of Unabombers fame.

Despite its historic status, The Palace Hotel had been run down and felt tired for many years. But having stripped The Refuge back and carried out some architectural changes, the space is now airy and open-planned, whilst still retaining the grandiose feel.

The name comes from the fact it used to be the home to a life insurance and pensions business, The Refuge Assurance Company.

With numerous awards under their belts, the Volta owners are looking to bring the best of Manchester to their new home. Justin walked me round the huge space and told me how he wants this to be a hub for everyone and anyone.

“Manchester can feel segregated at times, with the Northern Quarter, Spinningfields and Deansgate all having a certain crowd. We want anyone to be able to walk in here and feel welcome, without spending more than the price of a coffee.”

This is something the pair can’t stress enough. Mornings, they want freelancers, friends and those looking for a place to come in and be able to buy a coffee and not feel like they’re in a hotel.

As the day progresses, the public bar will be serving craft beer from local and UK microbreweries until 3am, rather than the usual mass-produced international lagers.

There’s a real sense that they aiming to build a community here. The underground club is located in the legendary Copperface Jacks. The space will be cleaned up and painted but left largely raw and untouched. They want the space to feel natural and not overly finished, keeping in mind the atmosphere and legacy of The Electric Chair.

The space is currently open to hotel guests although it’s not quite finished.  The Refuge plans to open its doors to the public mid-September. The entrance will be on the corner of Whitworth St/Oxford Rd, rather than the hotel lobby.

It’s an ambitious task. The covers are increasing and they’re planning to offer room service to hotel guests. Duties will be shared between the Volta team and The Palace’s own staff. Pricewise, they’re looking to match their West Didsbury menu and are looking at the likes of Gorilla.

However, they make no bones about it being cheap. They’re pursuing quality and The Refuge will be priced accordingly. But for less than a fiver you’ll be able to come in and enjoy a pint in a seriously special location.